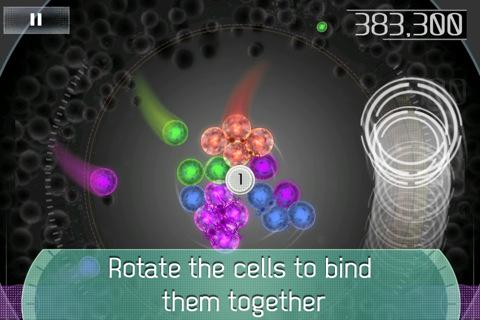 Cell Bound is simple, fun, and full of charm. You need this game.

Every now and then, a game comes along for the iPhone that is simply wonderful. Hothead Games, the folks behind bigger-budget Penny Arcade Adventures and Deathspank games, should be proud of the fact that their new title for the iPhone, Cell Bound, completely fits into this category. This is one of those titles that manages to get just about everything right, and it does so with brilliant simplicity.

The basic premise is… um… well, it’s not entirely obvious what the actual premise is. In a nutshell, players are dealing with cell samples in a sterile Petri dish. For some reason you have to prevent the cells from building up, which means they have to be quickly eliminated. The cells will drop in from different sides of the screen towards the center, and players have to spin the others around so they land with like-colored groups.

Cell samples come in different color types: there are a number of different color arrangements to choose from, but the default is red, purple, blue, and green. Once there are at least five cells of the same color grouped together, they will either (depending on the game mode) burst automatically or can be manually eliminated via the button the cells accumulate around in the center of the screen. If the cells pile up too much and reach an edge of the dish, the game’s over.

Cell Bound contains three different game modes: Infinite, Burst, and Timer. Infinite is the main game type, where colored cells drop down towards the center and, once they’re grouped together, can be destroyed via the trigger. In Timer Mode, players have to rack up as many points as possible; there’s no smart bomb option, but they earn an extra second for ever 1,200 points they earn. Finally, Burst Mode is the most difficult, because cells turn black when they’re connected to others that aren’t the same color. When they turn black, these cells make things more difficult by becoming permanent obstructions.

This is one of those games that’s insanely easy to learn, which compensates for how quickly the difficulty curve ramps up. At first, spinning the cells isn’t too hard, since they are fired off at a reasonable speed. After a minute or so though, the cells are coming in from all sides and it’s really difficult to keep track of them. However, while it’s easy to lose a game, it’s never feels frustrating or unfair. 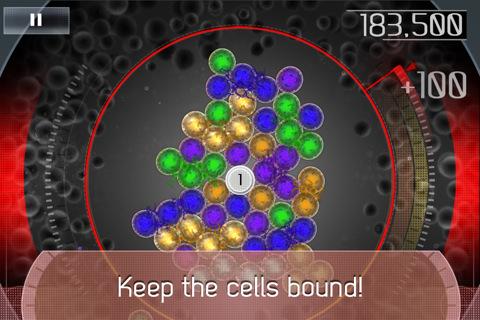 Visually the game is simple, but full of charm. Honestly, this is just a bunch of glowing circles on top of a dark background. That said, the graphics are pretty adorable thanks to the color choices and the general layout on the screen. The audio, too, is simple but solid, with custom music and sound effects that is pretty delightful to listen to.

Overall, Cell Bound is pretty much the perfect casual iPhone game. It’s incredibly simple, but it’s addictive and fun and pretty much impossible to get tired of. The only real downside is that there aren’t a lot game modes available, but it’s easy to overlook this when the gameplay is as good as it is. No matter what type of gamer you happen to be, this is something that you will almost undoubtedly love.