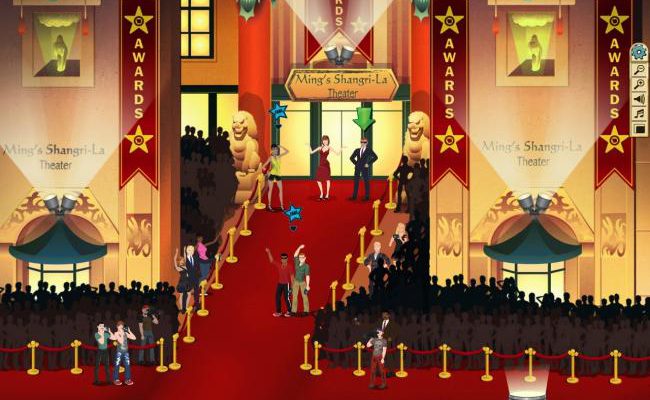 CelebrityMe by Seismic Games is a Facebook game that puts you in the overpriced shoes of a Los Angeles celebrity. Your avatar can live out your new virtual life as an actor, a musician, or a socialite–or you can go for broke and try for all three. Despite some flaws, CelebrityMe is generally a fun game that parodies the LA lifestyle more efficiently than it emulates it, but the game’s refusal to take itself seriously is a big part of its draw.

When you begin CelebrityMe, you create your male or female avatar, which includes the very important task of choosing a cheesy stage name. Interestingly, you start the game at the height of your career, at the premiere of your first big movie. The premiere gives you a good idea of what you’re in for: you learn how to walk and talk, you rub shoulders with the stars, and you assemble your movie, which is a parody of “Titanic” (but with more dinosaurs. You’ll see). When “Oprah” asks you to relay the story of your rise to the top, you enter an extended flashback, and that’s where the game really begins. You wind up on the beach with little money, few contacts, and a head full of dreams.

The gameplay in CelebrityMe is essentially broken up into bite-sized activities. You shop for clothing and accessories according to your aspirations (don’t show up in daytime rocker’s clothes at a posh socialite night club, for instance, or you’ll be laughed out of the joint), you talk to big names to get a push, you perform activities that improve your proficiency at an activity, and you build a “big show” around that particular activity.

For instance, if you want to be a rock star (and you know you want to), you need to shop for cool clothes, get in good with “Simon Cheerio,” jam with street performers, and then cap things off with a big performance. 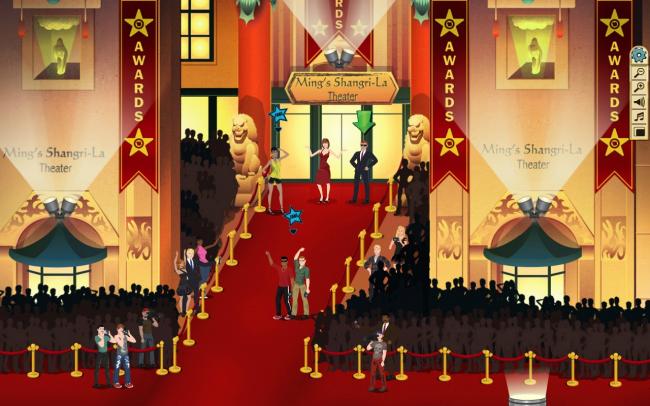 Making said performances basically involves stopping roulette wheels on non-disastrous outcomes. These positive outcomes, combined with your wardrobe, help determine your societal standing at the end of an event. If everything goes well, you’ll get paid. Then again, it doesn’t take much effort to make sure the roulette stops in a favorable position, and even if you do happen to get screwed, you’ll probably do okay as long as you don’t bodily explode and take your audience down with you.

In other words, it’s really not that hard to climb to the top of the world in CelebrityMe. Sure, it’s a game, but LA is a desert hell that chews up dreams. A little more realism in that regard wouldn’t be amiss. 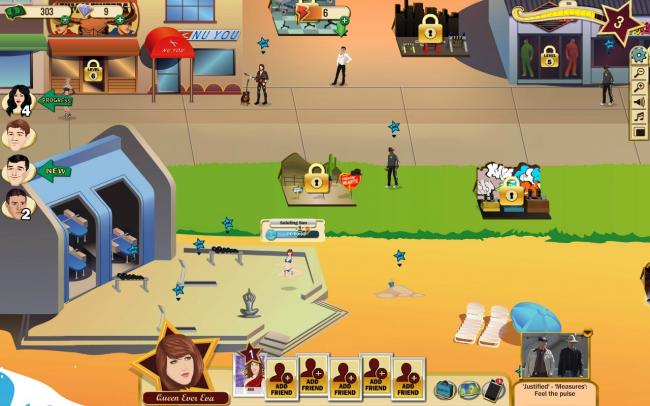 A little more realism in the graphics would be nice, too. The movie/concert/club scenes you put together are pretty funny, and fun to share via Facebook (though they lack real interactivity, aside from choosing actors, friends, dates, and events via the roulette), but the characters move stiffly, and don’t emote too well. Things also move quite slowly on the game’s map, even though there’s little variety in the graphics. The street performers you jam with all look the same, as do the rap artists you freestyle with, as does every sand castle you build (long story).

CelebrityMe is a light-hearted social take on the LA lifestyle, and the game even lets your avatar date members of the same sex, which is nice. If you’re looking for a complicated and dramatic take on celebrity life, you won’t find it here, but the game’s worth experiencing for the chuckles it brings in.