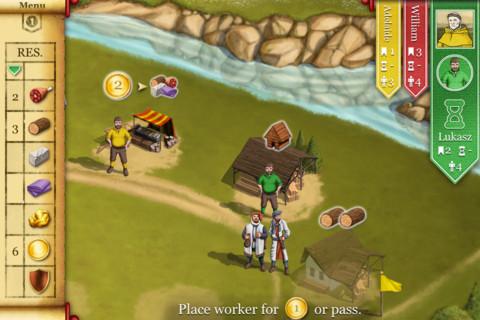 It’s exciting to be a board game fan and touch screen owner these days. It seems that with every passing day, more and more game makers are getting on the bandwagon and releasing digital versions of their new board games on the iOS devices. When Elder Signs hit stores, the digital version hit at almost the same exact time! That being said, it’s nice when they give older games some love as well. Enter the worker placement “classic” Caylus.

I put parenthesis around classic not because it isn’t a great game, which it is. Or because a lot of people don’t think of it as groundbreaking, which they do. No, I put them there because the game came out in 2005, and I just refuse to consider 2005 “classic” territory yet. I don’t want to feel that old.

Regardless, Caylus is considered by many to be one of the granddaddies of worker placement games. A worker placement game is the kind of game where pieces are placed on a board, hopefully to pay dividends later like in points or resources. They pieces are “working” for you. It’s a popular mechanic and used in games like Kingsburg. They’re European in nature, and play slower and more methodical than standard fare.

Caylus is an incredibly dense game, so I’ll only give a very general overall as to the gameplay just to give you an idea of how it all works. In Caylus your goal is to do your best to impress a King while helping to construct his castle, doing a better job than your opponents. To do this you’ll occupy various buildings along a road leading away from said castle, and use those buildings to acquire the resources necessary to help in the construction. Different buildings have different abilities, but all eventually lead to you pitching in to help build the castle.

Doing a good job along the way will earn you “King’s favors” that will give you additional resources, bonus abilities or even more points towards an eventual victory. The castle is constructed in stages and when the castle in finished being built whoever has the most points wins.

That’s a very basic look, and I can prove that by telling you that games routinely last an hour or more when playing with other people, and if you’re lucky, faster if you’re playing the AI. It’s complicated and there’s a lot going on, though once you play it a bit you start to see how the pieces fit together.

My favorite aspect of the game is the Provost. All of the buildings occupied and built over the course of the game get placed along a road leading from the castle. You move the Provost along that road during your turn (if you can). Any buildings further from the castle down the road don’t produce anything, they’re “turned off” until the Provost is moved away. Using this tactic allows you to potentially keep precious resources away from your opponents. It’s really unique and was fun to use.

Graphically, Caylus is nothing to write home about, but it gets the job done which is no small task. There’s a ton of information to convey and everything makes sense. It’s nice to have the colored discs and cylinders that come with the analog game replaced with images of workers and buildings here, as it really does help with the theme. The music is likewise well done. 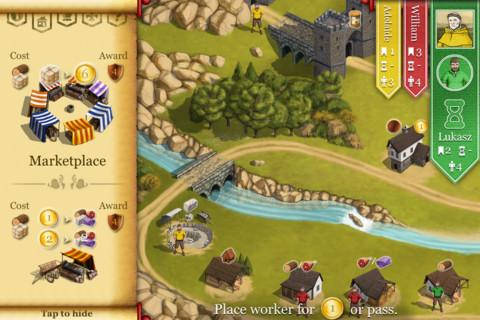 I love having dense games like Caylus on digital devices because of the built-in tutorials and rulesets. I’ve still never seen a tutorial as good as the one in Carcassonne, but the instruction here is serviceable. The rules are always within grasp, and everything is laid out and explained well, though there is a lot of it all said and done. Tutorial aside, it’s nice to have the app run the game while you get used to learning how to play.

The game plays 3-5 players and can be a mix and match up real and AI opponents. You can also go online and play that way too. Online play worked great, though I think with games lasting so long you run the risk of someone dumping out before it’s through. That’s not the fault of the developers though, just human nature.

I’ve said it before but it bears repeating, I love the board game infestation on the iPad. Not only is it a fantastic way to take your games on the go, but they give you AI opponents to play when no one else is around, and if nothing else it gives you an excellent (and cheaper) way to learn and test drive board games before plunking down the large cash to buy the analog version. While I may hate using the word so soon, Caylus really is a classic, and it’s wonderful to see it brought to life digitally to expose it to a whole new audience.