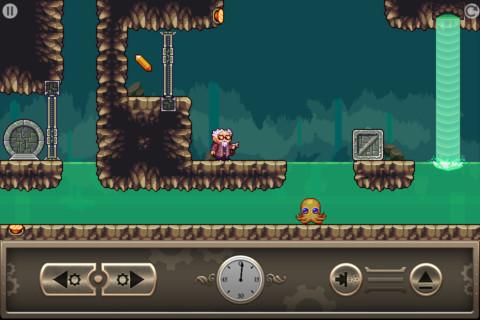 In some respects the iPhone is the puzzle gamer’s dream come true, considering just how many brain-teasing titles reside on the device. Then again, the vast majority of these games are basically junk, with little excitement and even less originality. Cavorite 2 falls squarely into this camp, presenting the same block-pushing, platform hopping challenges you’ve seen a million times before, only with an additional half-baked anti-gravity mechanic. It’s ultimately quite a snoozer.

Cavorite 2 picks up immediately after the original. Dr. Cavor has managed to elude his alien captors, locate his spaceship and plot a course back to Earth. Unfortunately, no sooner does he get airborne than he discovers that the vessel has been drained of all its fuel, and he crashes right back into the lunar surface. The good doctor believes he can harvest moon rocks to use as a fuel source, so he begins scouring the caverns in the hopes of securing his means off this rock once and for all.

The setting isn’t the only thing that’s recycled, as the gameplay also remains fundamentally unchanged from the series’ first entrant. The objective still remains pushing boxes onto switches and doing a bit of light platforming in order to reach the objectives. The one mild twist is that the doctor can spray boxes with the titular “cavorite” to make them temporarily weightless, using them to reach otherwise inaccessible switches or grabbing on to ride a box to a high platform. There isn’t the slightest of difference between these mechanics and those of the original, so it would seem the developers devoted the entire dev cycle to creating new stages instead of coming up with new ideas.

So what of these new stages? A few of them are admittedly clever, but for the most part they’re dull and uninteresting. It’s basically a constant parade of “push this box over there so that that box will fall down and I can ride it over to this platform.” There are a few stages where timing becomes an issue, but these levels are often frustrating because they directly counter the thoughtful, ponderous nature of the game. All too often stages must be restarted because you took too long considering the solution and by the time you had it the window of opportunity had closed.

Cavorite 2 also fails to score any points with its presentation, opting for “retro” visuals and sound effects that feel more like lazy design that intentional art choice. I understand that the old-school vibe holds a strong allure for developers right now, but when you aren’t going to do anything interesting, it just comes across looking slapdash and reeking of lack of interest. The soundtrack is mostly a rehash too, but considering the game borrows basically everything else from the original, this doesn’t come as much of a surprise.

It’s pretty clear that Cavorite 2 is not a sequel, it’s an expansion. The bad news is it’s not a particularly good one, and a general lack of charm or any type of developmental progress torpedoes the experience almost immediately. If you’ve played the original, then you’ve already seen practically everything the sequel has to offer. If you haven’t, there are better puzzle games out there more deserving of your money and time.