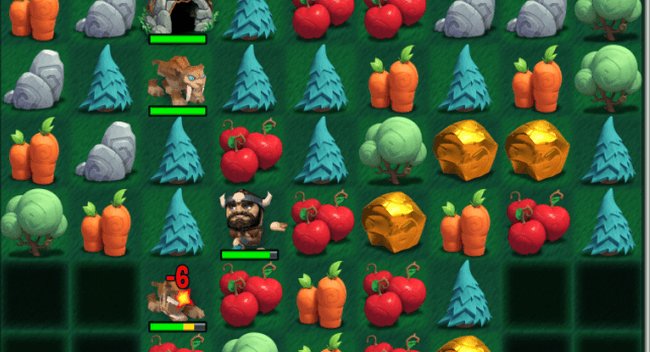 Not your ancestor’s match-three game

Cavemania is the long-awaited result of what happens when developer BonusXP partners up with publisher Yodo1 to release Yodo1’s very first global game: and let me tell you, this thing is more exciting than the discovery of fire. The bulk of Cavemania is played out on a simple match-three game board, which is filled in from top to bottom with colorful items that cavemen would normally find out in the wild and harvest for their precious resources: apples and carrots; leafy trees and pine trees; rocks and gold ore. Matching three or more of each item will net you a nice share of their respective resource, which you’ll need for reaching the goal in some levels, or to put towards building things in others.

But now here’s the big twist that sets Cavemania apart from other match-three adventures just like it: your Chieftan character also occupies a space on this changing game board, and you’ll need to utilize his position in order to do battle or protect delicate structures from meeting their end in the harsh realities of nature. What’s cool about this is that you’re always able to make any move on the board that you want, and permanently swap any two items regardless of whether they make a match or not.

This heightens the overall strategy of the game to exciting new levels: for instance, you might opt out of farming new resources for a few moves, if the current situation calls for you to move you Chieftan into fighting position with the deadly beasts and wildlife that also populate the game board from time to time; or conversely, you might want to move an injured Chieftan away from any harm until you can better gather your bearings. Your characters will automatically attack an enemy whenever they are in close range (one square away, either adjacent or diagonally), but be careful because the enemies will also be able to do exactly the same! Luckily, matching four or more like-items in a single move will reward you with a rare blue crystal, which can then be used at will to unleash a particularly devastating attack on your unsuspecting foes.

The graphics in Cavemania are simply fantastic, with incredibly smooth character and items designs, and a game board that’s positively brimming with color. The developers used an interesting mix of more traditional 2D cartoony artwork for the menus, map, and interface, and a highly polished and almost “fine art” effect when it comes to the different resources like apples, trees, and gold ore that you’ll be matching and collecting. Conversely, the Chieftan and other characters and enemies on the board are rendered in full-fledged 3D, and their constant living movements and animations are an especially nice touch. These three different styles come together flawlessly, and always make for a visually interesting experience every time you get back to the matching.

Just as deep and extensive as the different visual stylings in the game, we also have the sheer variety of level types and objectives to work towards on your journey through Cavemania. The game starts out simply enough, with the first few levels requiring you to collect X amount of food resources or X amount of lumber. But once you start to get a better feel for the basics, things ramp up in fresh and exciting new ways. Pretty soon you’ll find yourself tasked with everything from battling ferocious Sabertooths without letting your Chieftan fall, to rescuing or recruiting new warriors in the heat of the battle, to even stocking up on your resources so you can construct buildings on the actual match-three game board, like Granaries, Temples, and Lumber Camps, each of which brings their own specific perks upon their successful completion.

All of these objectives prove to be especially challenging, considering that you’ve always got a move limit to worry about. And admittedly, defeating three wild Sabertooths and finding time to build a Granary all in a mere 25 moves can almost seem like an impossible feat at first; however, this is where leveling up your Chieftan and fellow villagers comes into play, which once again only serves to heighten the complexity and rewarding sense of progression throughout this deceptively simple match-three puzzle adventure. The primary upgrades involve boosting your attack power and raising your overall health, and they’re all a bit pricy for the kind of coin you earn from completing each level with a 1- to 3-star rating based on score.

And if you’ve somehow got a few coins leftover when you’re not stockpiling for more of the permanent upgrades, you can always splurge on a few of the “vanity” items, which enable you to customize your characters by changing their hair styles, their hair and body color, and the appearance of their current weapon at hand. As you progress through the main questline and encounter more frightening creatures of the prehistoric world, you’ll unlock other types of villagers with their own unique sets of skills, like the Archer with her long-ranged attack, or the Healer with his (you guessed it) awesome tribal healing capabilities. Additional villagers that you’ve unlocked can be placed on the various game boards at will, so long as you earn the resources needed to recruit them. 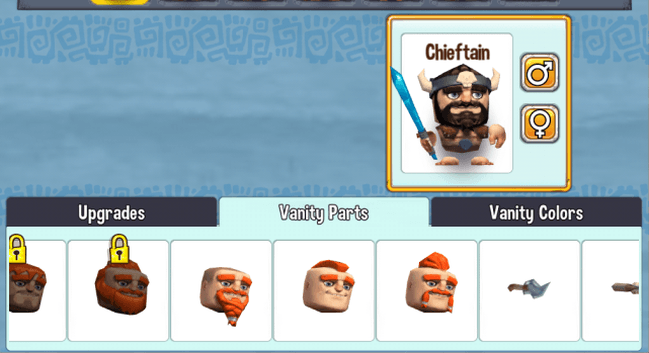 But unfortunately, for as much style and diversity that the game possesses in areas such as character design and gameplay, one of the only disappointments of Cavemania to me was in the game map, which lacks all of the heart and inventiveness that I saw in the rest of the game. Despite housing dozens of challenging levels, all of the circular icons are placed along a winding and lackluster track on a scrollable game map. The background world beyond this trail seems empty, lifeless, and dull, and that same woodland environment just seems to repeat the further that you scroll, and so it was just a shame to see such an uninspired and uninteresting approach to an element that had the potential to be truly spectacular.

But what need did cavemen have for maps anyway? Even with this slight misstep in the map department (it’s still a whole heck of a lot more detailed than those old cave drawings that our Chieftan is probably used to), Cavemania is still a fantastically deep, and a fantastically fun take on the match-three adventure genre. With an engrossing variety to the level objectives and the things you can do on a simple match-three grid, to the gorgeous and smooth presentation, it’s clear that to make a great game in today’s technological age, sometimes all you need to do is take things back to their prehistoric roots.