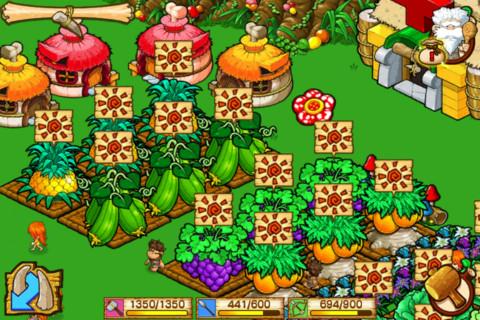 Caveman Land shows that even cavemen can be civilized. Sort of …

Just because cavemen (and women) had to hunt for food with spears and build homes out of rocks doesn’t mean they weren’t civilized. And in Caveman Land it’s your job to build up a pre-history civilization. It’s a title that plays a lot like other city building social games, only with a new theme and the addition of hunting. It may not be particularly original, but Caveman Land is definitely a charming, well crafted game experience.

The basic set-up will be familiar to anyone who has played this sort of game before. You start out with a virtually empty plot of land with the goal to build a bustling village. You’ll create homes for your cavepeople to live in (strangely, men and women have their own types of dwellings), various functional buildings like hospitals, and decorations to spruce things up. The customization options are surprisingly scant, and many of the cooler things to buy are pretty expensive. This makes creating a unique and fun village quite the slow process.

There are other familiar elements as well, including farming and clearing away debris like rocks and tree stumps. Caveman Land doesn’t use a traditional energy system, but instead limits how much you can play based on how many workers you have. Each job, whether it’s building a house or growing gigantic carrots, requires a worker’s full attention for the entire length of time it takes to complete it. So if all your little cavepeople are busy with jobs you can’t do a whole lot until they’re finished.

The only really unique gameplay mechanic comes from hunting. At any time you can head out to hunting fields and send your workers out to take down an animal. Depending on how many hunters you have and what type of weapons they’re armed with you’ll either catch yourself some dinner or end up with a hospital full of injured cave people. As you progress you’ll unlock new hunting grounds, progressively tougher animals to hunt, and new tools to take them down with. You can even lay down traps and check back later to see if you’ve caught anything. It’s actually pretty satisfying when you finally take down a giant creature, especially once you unlock the more terrifying dinosaurs. 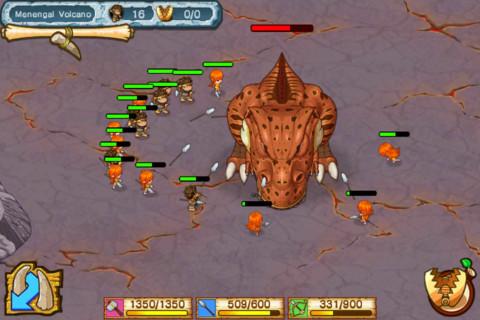 Considering it comes from the same developer that brought us games like Monster Pet Shop and Snoopy’s Street Fair, it should come as no surprise that Caveman Land looks great. The bright and cheery visuals and sound are terrific, but what really gives the game its charm is its sense of scale. Everything is just so huge, from the massive creatures you’ll hunt to the absurdly large produce you’ll grow.

Caveman Land certainly does a good job of crafting a solid city building game with a unique setting. The visuals and hunting mechanic go a long way towards creating the prehistoric feel, but other than that there’s little to differentiate the game from other similar experiences. And when you factor in the limited customization options and disappointingly simple social features, there are plenty of more full-featured games out there. Still, none of them will give you the thrill of taking down a dinosaur with nothing but a few hatchets.