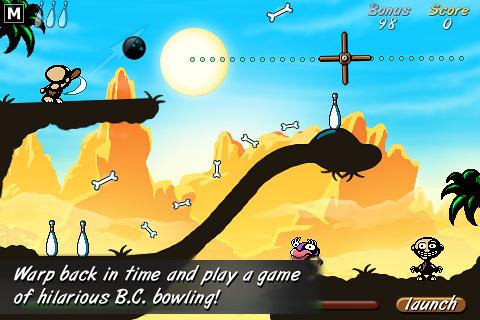 Don’t you just love bowling? The smell of the pterodactyl poop, launching the ball off a turtle shell, giggling as tiny dinosaurs get bonked… What, you don’t remember bowling like this? Your loss. At least Cave Bowling brings my experience of bowling to the rest of the world.

The latest game from Donut Games (makers of one of my favorite games ever, Rat on a Scooter) offers their wacky take on bowling. It’s not done in a lane with terrible shoes and that awful spray. Rather, it’s done in the time of cavemen, when men and women walked with the dinosaurs. Cave Bowling is as much about physics as it is knocking down the pins.

Instead of an alley, the pins are scattered throughout a single-screen level with platforms and obstacles galore. Using the touch screen, you set the angle of the throw by moving the arrow near your bowler’s head, and the strength of the throw using the meter on the bottom. Tap the throw button and see how well your shot flies. You must knock down all the pins in the level to unlock the next one. Bonus points are awarded for collecting floating bones, allowing you to achieve a higher rank on the level.

There are a number of obstacles and simple machines that help move things along, including water geysers that carry the ball, chutes that propel it over great distances, or turtle shells that bounce the bowling ball more like a basketball. Some of the obstacles require precision timing or aim, making things a bit more dynamic than they would have been.

The level design has few low points, with most being very clever in their use of physics and obstacles. Each level has its own title that gives you either a hint of what you’ll face, or a tip for how to win. There are some tricky ones, but thanks to the great amount of control you have over setting up the throw you can keep experimenting until you get that perfect score. And with 60 levels, you’ll have plenty of challenges to face.

Cave Bowling manages to avoid the big mistakes most “press one button to play the level” physics games make. For instance, the level always resets to your last attempt. If you’ve gone far away from the level default, the pause menu lets you reset to the original positions to try again if you wish. This one option makes even the most difficult levels palatable, because you’ll never feel frustrated by either getting so close and just wanting to tweak the shot, or realizing you’ll need a different tactic and starting again without quitting to a menu. 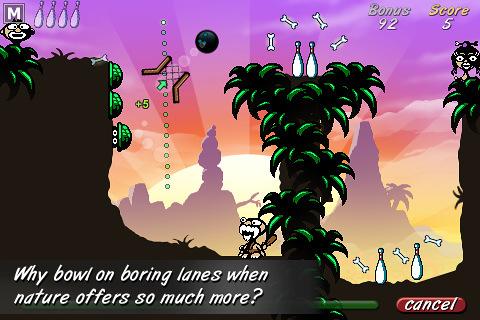 Cave Bowling has the same goofy look as other Donut Games titles, with cartoony characters and colorful, detailed graphics. The music is largely forgettable (a single drum-heavy caveman stereotype tune), but Donut Games remembered that we’re playing on a device largely known for its music playback and lets you use your own tracks. Microsoft recognized at the launch of their Xbox 360 console that every game should allow a custom soundtrack should the player wish it. Unless the developer is absolutely confident in their musical score, there is no excuse for every app to allow this as well. Thank you, Donut Games, for allowing this.

To try to keep you bowling, there are online leaderboards and basic stat tracking in the game. It’s nice, but it leads to the one problem with Cave Bowling: low replay value. Certainly you can take another crack at beating your score on a level, or try to get a three-star ranking on everything. But once you’ve knocked the pins down, there’s little reason to go back outside of if you really enjoyed a level. Some achievements or other unlockables outside the main stage select screen would have been nice.

Still, it’s nice to see some creativity and production value in what is a simple physics puzzler. Cave Bowling features original design, mechanics and challenges, something many iPhone games lack these days. For the price, it’s a prehistoric good time on the go.