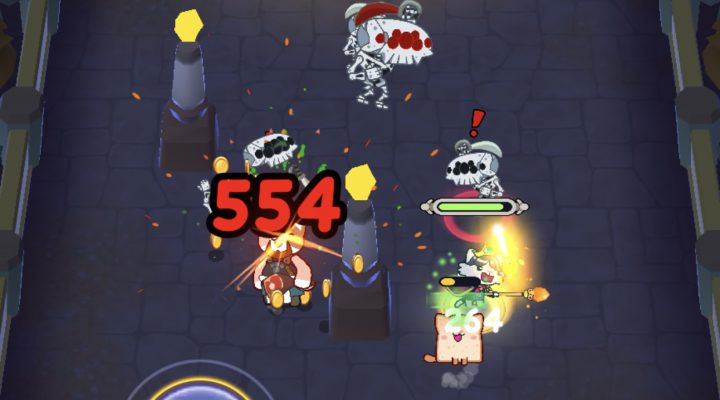 Fast-paced and full of action

Loads of cats to collect

Easy to get to grips with

Catopia: Rush is packed full of cats. And magic. And monsters. It’s a fast-paced arcade action adventure with gacha elements, team-building, and loads more besides. And it’s pretty darn good.

After some story and some explosions, you set off on a quest to save your people from a giant monster. This involves wandering through dungeons, firing off spells and recruiting an army of like-minded kitties to help you out.

You control everything with a thumb, moving it around the bottom of the screen to dodge attacks and make your way through the levels. Lift up your thumb and you’ll start firing at the closest foe. You’ve also got special moves that you access by pushing a button and aiming them in the direction you want to fire.

It’s a simple control system, and it doesn’t take much time to get used to it. That means you’re going to be jumping into the action headfirst, which is exactly what you want in a game like this.

When you’re not fighting monsters there are a variety of menus to look through, challenges to complete and plenty more. There’s always something to do in Catopia: Rush, always a new character to unlock or a new building to put up.

And you’re going to be having fun while you’re doing it all. It’s hard not to play Catopia: Rush with a determined smile on your face. It’s by no means a walk in the park, but the challenge is just enough to keep things interesting and keep you engaged.

This is the sort of game that you’re going to keep dipping into, slaughtering a few foes, adding new cats to your team and earning some more goodies. It might not be super deep, but the combat is slick and fun and you’re never short of things to do.

Catopia: Rush is definitely worth checking out. It’ll fill up some little play-sessions nicely, and it’s got enough going for it to keep you entertained for longer if that’s what you’re after. Plus, y’know, cats are awesome.

Hellrule Review – Hardcore With an Emphasis on the HARD