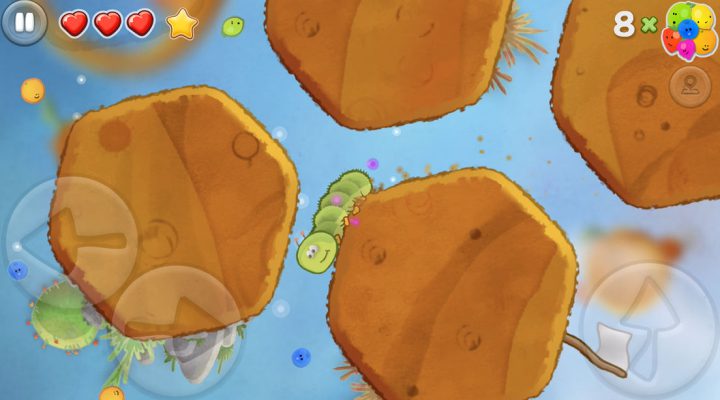 Not a game for the easily-nauseous among us.

Occasional glitch as Bob gets stuck in the environment

Demands patience: "game over" means a lot of retread ground.

Caterzillar – the latest from one-man indie studio PixelZapp, in partnership with prolific mobile publisher Noodlecake Studios – dares to ask a question so many have avoided: what would happen if we put a caterpillar in space? All right, it might not be something anyone was asking, but fans of mobile platforming will be happy to know the answer makes for one inventive game.

Following Bob the caterpillar on his journey to rescue his lost love, Caterzillar takes our intrepid butterfly-to-be on a journey across grasslands, desert, alien terrain, and even dark matter. Along the way, lest you forget that this is a mobile game, the game tasks players will collecting 100 fruit pieces and three stars in each level. On the surface, it might be hard to see where that “inventive” part comes in.

The catch, you see, is Caterzillar’s top-notch use of antigravity mechanics. Instead of your standard platforming fare, levels are assembled from floating orbs, rotating squares, and other assorted space debris. Right from the beginning, the fundamental building blocks of a platformer – getting from place to place – become a puzzle unto themselves. Caterzillar uses a few simple principles like the fact that Bob can walk upside down, and the fact that gravity is set each time you touch a new surface, to great effect. Throughout the game, geography cleverly walks the fine line between delightful and disorienting, and almost always answers that internal question, “I wonder if this will work?” with, “Absolutely!” By the time Bob is careening into each level’s exit portal, you’r brain will feel bamboozled in all the right ways.

With that said, PixelZapp doesn’t rest on its laurels and rely solely on zero-g zaniness. As the game progresses from level to level and world to world, Caterzillar slowly but surely introduces an interweaving set of new mechanics. Fans of the Super Mario Galaxy series will be particularly excited to see 2D renditions of some of their favorite concepts. Whether it’s twisting vines that shoot from the earth to create midair loop-the-loops, floating water that defies the laws of physics, or mobile cannons that rocket you to far-off locations, each new concept feels tailor-made for the game’s floaty environment. 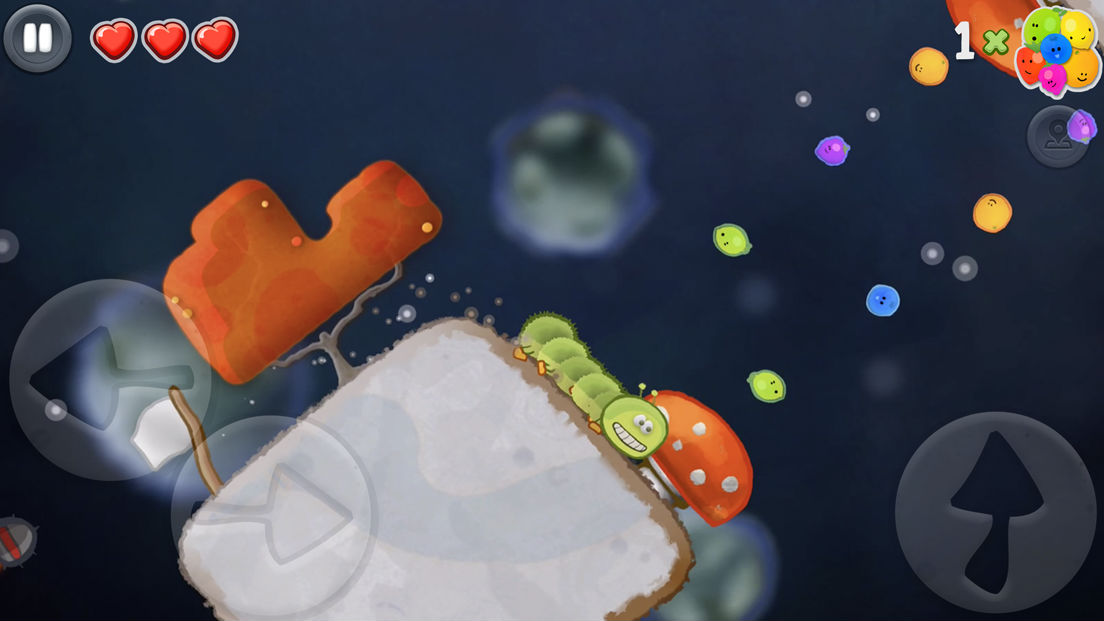 Smartly, Caterzillar fully explores these concepts across eight meaty levels in each of its four worlds instead of splitting levels up into bite-sized bits. Sometimes taking as much as fifteen or twenty minutes each, these stages allow players to feel like masters of each new mechanic. Speaking of meaty levels, don’t let the game’s bright, buoyant aesthetic and adorable fruit with faces fool you (as fruit with faces can so often do): this is not a game you’ll be breezing through. Each hit takes away one of Bob’s three precious hearts, and to lose them all means Game Over in the retro sense of the word, starting you all the way from the beginning of a level.

This can mean more than a little frustration as you find yourself within spitting distance of a level’s end only to be done in by an unexpected buzz-saw or wayward missile. There are even times when that frustration had me tempted to dock points from Caterzillar; ultimately, though, it served as a reminder of the unique conditions reviewers play within, forced to swallow a game whole.

Like Bob munching diligently away at his fruit, this is a game best consumed in small doses – a level or two at a time, reveling in the challenge and complexity of each stage.