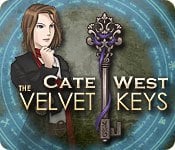 A peculiar string of murders has the police baffled in Cate West: The Velvet Keys. Though clearly not alive, the bodies show no sign of foul play, and aren’t decaying the way three-day-old bodies should. Cate offers to use her unique talent for seeing visions to help find a suspect, and quickly discovers an ancient curse, a hidden crypt, and an old enemy who may not be quite what he appears.

Velvet Keys is the sequel to Cate West: The Vanishing Files, and refers to the characters and events of that game often, which could leave new players a bit confused at first. Though it can be frustrating at first to not understand why Wesley is taunting Cate, you’ll pick up on who’s who quickly enough. The most important thing to know is though Cate uses psychic visions to help the police, which is where the hidden object searching comes in.

I always appreciate it when a hidden object game makes an attempt to provide a plausible reason for you to be finding odd bits and pieces, but Velvet Keys does it particularly masterfully. In order to awaken the victims from their undead states, Cate must first forge a Velvet Key by fusing the alchemical properties of random object – the perfect excuse for tracking down a rubber duck, scissors, hiking boots, and a katana.

The hidden object sequences are beautifully designed and will challenge even the most seasoned player. It’s not just that the items are well-hidden, but also that lists frequently involve a fair bit of clever wordplay that forces you to carefully consider what’s being asked of you. When looking for 3 Female Warriors, for example, you’d do well to notice the words "Amazon," "Joanne D’Arc," and "Valkyrie" hidden in the picture, and be open minded enough to realize that the "3 Threes" on your list is pointing you towards the number 9.

Assembling a Velvet Key allows Cate to communicate with the spirit of the victim, who will usually point her towards a crime scene. Once there, you’ll examine the scene by playing a twist on the spot-the-difference game; each image will be missing some elements that are present in the other image. To solve the level, you must make the scenes identical by returning items to their appropriate locations. It’s surprisingly tricky, because objects are missing from both scenes – you’re never sure where you need to look next.

To further get in tune with the victim, Cate must examine items that meant something to them, and this is where the game really gets creative. You might be provided with pieces of object, say, half a cassette tape, that you must repair by finding the other half in the image. You might be shown a close-up photo of an item, then asked to guess what it is. Or, in my personal favorite mini-game, you’re asked to find the item in the scene based on the victim’s memory of it. A victim’s comment that "We were always fighting over what news program to watch," suggests the TV remote control, while "I bought the best champagne for New Year’s Eve" points you toward the corkscrew and cork.

Once Cate has all the information she needs, the victims are taken to the Ossuary – a bizarre machine designed to revive them – which Cate must activate with the approprate Key. The puzzles required to turn on the machine are relatively ordinary, such as match-two or sliding tile games, and you can skip them if you like. But you probably won’t want to; your final score determines which game ending you get, and the bonus for completing the Ossuary puzzles is pretty hefty. You get other bonuses for finding items quickly or completing levels without using a hint, so look sharp and work fast.

Cate West: The Velvet Keys beautifully shows that players should expect more from hidden object games than just a jumble of junk and a shopping list. It’s a long, smart, extremely polished game that sets the standard for the genre. Developers should look on Velvet Keys with a mixture of fear and awe, because it’s a yardstick by which future hidden object games should be judged.