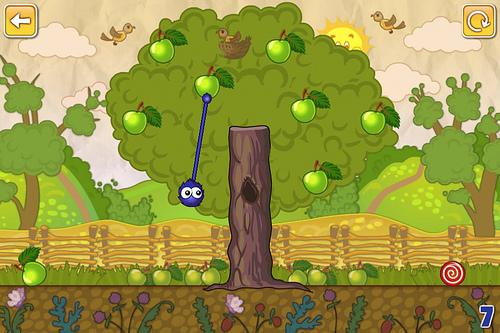 As my old school teachers used to regularly tell me, there’s nothing wrong with being a little bit simple. Indeed, in the world of iPhone development, it’s these simple ideas that often end up being the runaway hits – as long as they involve a bird or two somewhere down the line, of course.

By keeping things so straightforward, however, there’s always the threat that the play that results will be far too one dimensional. As Catch the Candy proves, by sacrificing any sense of complexity, developers run the risk of killing the gameplay in the process.

It’s searching for any semblance of fun in what Catch the Candy serves up that dominates your play time, given the task at hand – tracking down pieces of candy, just as the game’s name suggests – is neither especially taxing, nor entertaining.

Taking charge of what’s best described as a blob with an especially large tongue, controlling his lengthy muscle actually serves as your one and only input. As such, any point of contact with the screen results in his tongue flying out towards your finger, sticking to any surfaces in the immediate area.

It’s your job to utilise his tongue like Indiana Jones’ whip, with any lift of your finger resulting in it returning to sender and – if your timing is spot on – your blob flying through the air for just long enough for you to latch onto the next object at hand.

Once you’ve mastered his movement, getting close enough to the one blob of candy that decorates each stage is your next priority, sending out your tongue on its final mission to pick it up in one swift movement.

Of course, there are obstacles aplenty to get past first, and – in theory, at least – the tongue can be used both to draw objects closer to you or blast them out of the way with a quick, short lashing. The problem is, Catch the Candy plays as if it needs to go through several further rounds of testing – there are levels where success, whether in your first attempt or during your one hundredth crack, is largely down to luck.

Some stages are simply a case of pushing one or two objects off the radar, ranging from a series balls that fit neatly into gaps in the track, or a stack of bricks standing between you and the sweet stuff. However, often merely making your way around the levels themselves is an ordeal, namely because their design runs perilously close to being unworkable.

One fairly early stage of the 53 currently on offer sees you attempting to climb a diving platform before making your way over to the candy piece, merrily sat sunning itself on a sun lounger. Problem is, it’s virtually impossible to scale the the heights of the platform itself, and with no other route on offer, it’s game over before the level has even begun. 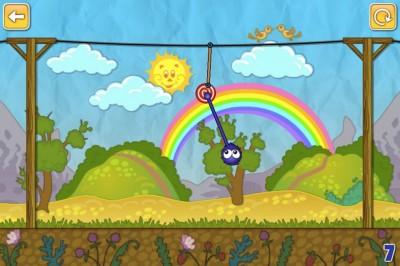 That is, however, Catch the Candy‘s problem all over. The lack of creativity when it comes to the design of its stages nullifies any chance it might have had of serving up memorable play from the word go. The lack of effort that has gone into empowering each level with any sense of character or distinction whatsoever verges on the lazy.

Instead, Bulkypix has opted to serve up a playground that, while wrapping up every location from a trip on a cable car to a run on the golf course, never offers any genuine level of interaction.

Indeed, Catch the Candy often fails to hit the mark even when it comes to the most basic elements of level design, and the game as a whole feels like a something of a rush job – a concept that was far too plain to begin with, shackled by a series of equally tepid stages that do nothing to paper over its already sizeable cracks.