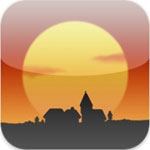 The Island of Catan is a happening place. It’s a hopping chunk of land that’s so laden with resources that it has to beat settlers off with a big stick. Everyone wants to stake their claim to a major piece of this hexagonal floating rock in a quest for supreme colonial dominance, but they’ll have to plan their turf expansion and resource gathering very carefully if they want to come out ahead. Though it never quite comes to physical blows, this island competition can get pretty cutthroat in a hurry.

Based on the popular strategy board game Settlers of Catan, this portable version crams all the resource-gathering, infrastructure-crafting, and trade-conniving of the original into a small, neat package. It features simple, easy-to-learn gameplay that hides a surprising amount of depth and challenge. Catan is a hexagonal-shaped plot of land divided into 19 smaller, colorfully-designed hexagon territories. Aside from one barren patch, each hex holds one of five precious harvestable resources (brick, lumber, wool, grain, and ore) needed to build towns, lay out roadways, and upgrade to cities. Throughout the course of a game, each player strives to gain control of these resources by building colonies and roadways along the edges and corners of each hex. If you can also thwart your opponents who seek to nab the same territory in the process, more power to you.

After an initial setup round where every settler is allowed to place two towns and a few roads on the board, the fun really begins. Each hex is assigned a number from two to 12, and when the dice are rolled every turn, any players who’ve developed an adjacent town to the plot matching the number rolled receive a unit of that hex’s native resource. Situating your towns near frequently-rolled hexes and building out to block other players’ expansion is all part of the strategy. You receive victory points for each town and city you own and for special circumstances like having the longest string of connecting roads. The first player to reach the predetermined victory point goal is declared the winner.

Other rules and twists also come into play to beef up the challenge and encourage strategic sneakiness. You can trade resources with the bank at a 4:1 ration or haggle with other players to facilitate the exchange of needed goods. But at any time you can also find yourself coming up short on crucial goods. Rolling a seven on the virtual dice lets you move a robber token on any hex of your choosing. He’ll then steal resources from an adjacent player and halt the harvesting of resources on the land he’s on until moved. These nuances really add an extra measure of surprise to the gameplay.

Catan’s stylish and colorful map can be easily zoomed into for a closer look at the landscape animations and settlement layout. The computer A.I. is crafty enough to offer up a solid challenge when playing solo, though this game is really all about playing with friends. Unfortunately, the only way to do so in this version is in a hot seat mode where you must physically pass your iPhone around to each player during their turn. Other than that minor limitation, this is one excellent addition to the iPhone’s line-up.