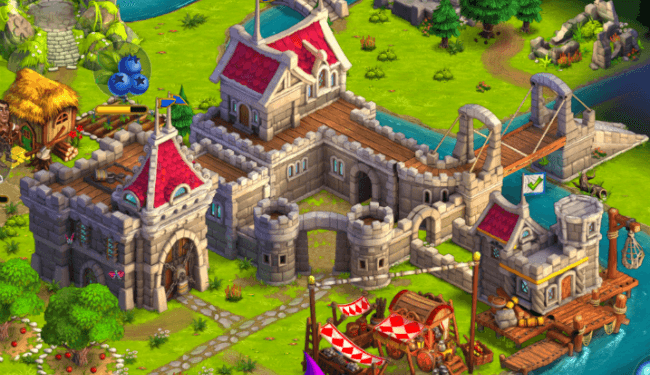 While the original CastleVille fits snuggly in the history of Zynga’s Ville games as the spiritual successor to The Pioneer Trail, CastleVille Legends sets out to be something ambitiously new. Designed from the ground up for mobile, Legends is more a game of trading and economics than it is a medieval life simulator.

If that description scares you off, don’t worry – much of Legends will feel like a familiar experience to the Zynga faithful. The nuts and bolts that bring the game together (crafting, quests, etc) are things that you’re already doing in other games. The trick, though, is that these elements come together in Legends in a way that creates something we haven’t seen before in a Zynga title.

If we were to break CastleVille Legends down to its base mechanics, it would probably look something like this: creating resources, crafting those resources into products, and selling those products for fun and profit.

On paper, I admit it sounds a little like FarmVille 2. But the execution here feels markedly different.

In keeping with the character-driven CastleVille flair, you’ll find that one of your earliest resource creation stations will be the home of Rafael the Woodsman. With a swipe of your finger (and the cost of 6 coins), Rafael will be happy to make some axes for you. This takes a minute (yes, waiting plays a role here as in many free-to-play titles), and once you collect those axes, you can use them to chop down trees. Fallen trees produces logs, which when taken to your Woodshop can be turned into items like torches, ladders and lanterns. These can be sold for coins, which in turn allows you to buy more buildings that will produce and craft new and different resources.

There’s a catch though – and it’s a particularly brave one on Zynga’s part. Rather than allowing players to sell any item, they can only sell the items that Myra the Merchant is looking to purchase right now. 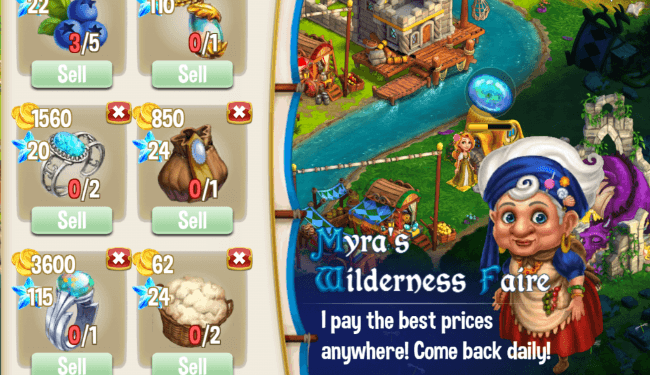 Myra has a list of items she’s willing to accept, and if you have stock in something she doesn’t want, you’re going to be stuck with that item until she does. While this might be viewed by some as a bit of a buzzkill, I quite liked this element of CastleVille Legends. It made me put thought into which items I chose to craft instead of just crafting something because I could. Similarly, there’s a cap on how many items you can store in your inventory at one time, so you’ll really need to ask yourself questions like “do I really need these blueberries right now, or can I wait before harvesting?”

If you’re of the school of thought that this element is kind of a bummer (you’re entitled to your opinion, even if I think it’s crazypants), you’ll be glad to know that trading opens up a bit more once you reach level 5. In fact, CastleVille Legends introduces an element that Zynga players have been wanting in other games for years – player-to-player trading.

Dubbed “sea trading,” as you’ll be sending your cargo back and forth on boats, players can put items up for sale on a global marketplace where other players will be able to purchase your goods in exchange for coins. And they’ll want to, too – when crafting my own goods for sale, I found myself frequently jumping into the world of sea trading to acquire needed goods (rather than wait to create them on my own). It’s a pretty brilliant system, and they’ve managed to balance it in a way that will keep you from buying your way through the game and missing all of the fun. Your shopping options will consist of only a small random sampling of players, so there’s no guarantee you’ll always be able to buy what you need.

Of course, not every item will be a guaranteed get. Sure you can farm cows for milk, but how do you farm stardust? Or craft legendary items like the glove of Midas? For these, you’ll need to send heroes on adventures. 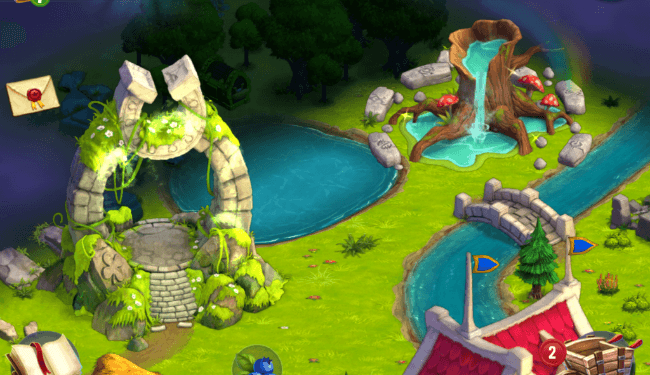 Adventures are kind of a mix of normal resource gathering and a slot machine. Normal, in that you just need to drag some heroes onto the adventure site and wait until they’re finished – but slots, in that there’s no guarantee you’ll get anything more than experience points. This means you’ll want to unlock as many heroes as you can to keep the adventures going, and if you have a surplus of primo items… well, I suppose there are some other players who’d love to go shopping on the high seas.

If you’re downloading CastleVille Legends to recreate the desktop experience in your pocket, you’re going to be sorely disappointed. There are no neighboring kingdoms to visit, no gloom rats to fight, no castle walls to build. But in its place is something better. Something fresher. CastleVille Legends has clearly been developed with mobile play in mind. Zynga has taken a bold step in trying something new with a familiar brand, and it’s paying off.

Or at least it will once Myra is willing to buy it.