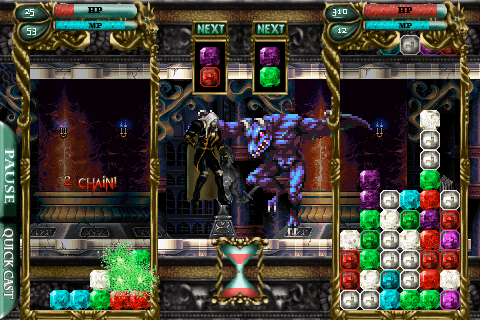 (In the interest of full disclosure, I have played the original repeatedly over the last decade. I am so intimately familiar with the game that I can literally play it in my head without a controller in hand.)

Following the plot of the classic title, Castlevania Puzzle: Encore of the Night tells the story of Alucard, son of the evil Count Dracula, who is drawn to CastleVania to put a stop to his father’s reign of terror once and for all. However, there are others who roam the castle, and not all is as it seems. The hero of the people, Richter Belmont, has seemingly turned to the dark side, and his sister-in-law Maria is searching for answers. Even Death himself has a say in your fate.

The castle layout is the same as the original – that is to say, enormous! CastleVania is made of up different areas, like the Marble Gallery, Underground Caverns, Outer Wall and more. Each area has a vast number of rooms to explore. Saving your game comes in the form of Safe Rooms littered throughout the castle. These rooms allow you to replenish your HP and MP, as well as shop with another important character, the Librarian. If you know where to go from the original game, you’ll know where to go here. If you’re new to the Castlevania universe, don’t worry as you explore the massive map. The Librarian character will help guide you to your next destination with the game’s generous hint system.

To navigate the map, rather than jumping and slashing like an action game, each room of the castle is its own spot on a larger map that you tap to proceed. Areas that are accessible have a blue line guiding you, while areas that require an item to access or switch to flip are marked in red. For better or for worse, you’ll be doing a lot of backtracking in Castlevania Puzzle: Encore of the Night. It’s a staple for the series, but may be a touch inconvenient for newcomers.

Making this backtracking easier is a brand new way of teleporting around the castle. In the original Symphony of the Night, you would need to find special portal rooms. Here, every Safe Room acts as a portal. This saves a lot of time and effort as you traverse the labyrinthine corridors of the castle.

Castlevania Puzzle: Encore of the Night is a beautiful game. Even though the art is mostly recycled from Symphony, it holds up well. Some of the sprites have been re-drawn with a higher-resolution look to them, while others remain pixilated. It’s a bit off-putting to see Alucard resplendent in his cape facing a chunky skeleton, but this is a minor flaw. The story is told through short cut scenes that are skippable if you want. The soundtrack is taken directly from the original title, and it’s still as hauntingly beautiful as ever. If the music isn’t your thing, you can import your own playlist to listen to as you hunt evil. 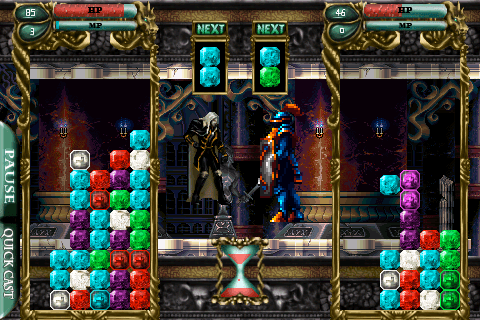 Of course, Castlevania Puzzle: Encore of the Night would be nothing without solid gameplay, and it is here in spades. Whenever you enter a new room you may have an encounter with one of the ghoulies of the night. A versus screen appears telling you what beastie you’ll be facing. The match-three gameplay here is pretty simple, with colored gems falling from above. If one side lands, the other will continue to fall. Some pieces require a match beside them in order to be cleared. Again, fairly standard stuff.

Where Castlevania Puzzle: Encore of the Night changes is in both pacing and how to achieve victory. Remember, Symphony was an action game, and Castlevania Puzzle: Encore of the Night tries to retain that feeling. An hourglass in the middle shows how long each “turn” is, and if whatever damage you’ve accumulated through matches and combos is dealt to your opponent and to you. But winning or losing isn’t simply achieved by filling up the playfield. Your opponent’s HP must be brought to zero. As you fight bigger and badder bosses – some of whom have many times your HP level – you’ll need to attack with more vigor. If the playfield gets filled and another attack is on the way (by means of blocks being sent to your opponent), then the game determines how many rows of blocks must be destroyed in order to accommodate the coming assault. The greater the number of blocks that are removed, the higher the damage. This means that huge comebacks are possible – from either side.

The matches are fast and furious, and balancing dropping colored gems with using items and spells ends up feeling very much like an action game. Admittedly, some of the bosses are particularly hard the first time you face them, but these odd spikes of difficulty aren’t too bad. A bit of perseverance and resourcefulness will save the day.

Aiding you are items, spells, weapons, armor, relics and more that you can give to Alucard to power him up. Like a good action RPG, Alucard levels up the more enemies he defeats. Every time you level up you can allocate ability points to different stats like strength, stamina, intelligence or luck. You can also allot points to different spell systems like Fire, Ice or Holy. These spells can be used in battle with different effects. For instance, some spells grant you an instant 10 HP attack on your opponent, while another may grant you a percentage-based boost. Others are elemental attacks that are either effective against your opponent or help them. Finally, others still give you a temporary stat boost, like defense. 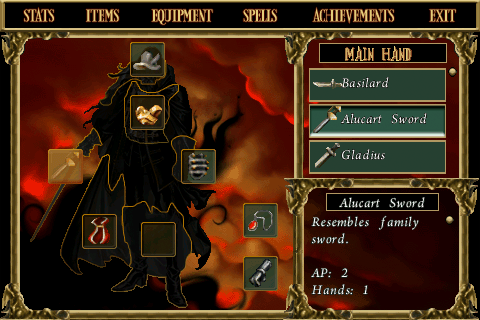 The items and equipment also give Alucard help with his base stats as well. It’s up to you to customize Alucard based on your style of play. There are a ton of items to collect, and others still to earn. Special cards create different sets that grant you bonus items. Also, the game’s honors (achievements) will give you extras like experience or a special item.

Castlevania Puzzle: Encore of the Night, as mentioned, is an enormous game. Its depth is immense, from its leveling system to the battle system to the castle itself. Without giving anything away, let’s just say that just when you think it’s over, your battle has only begun.

In fact, the only real flaw in Castlevania Puzzle: Encore of the Night is the lack of a quicksave option as opposed to needing to find a Safe Room. This in itself isn’t so bad, as you can instantly teleport back to the last Safe Room you were in. Any real flaws in Castlevania Puzzle: Encore of the Night are so negligible that they are almost always compensated by something that more than makes up for them.

Very rarely does an iPhone game come along as complete as Castlevania Puzzle: Encore of the Night. It appeals to many so many players, from RPGers to puzzle fans, that it’s hard to find anyone who wouldn’t love this game. It’s a phenomenal download, and absolutely worth your time and money. So stop what you’re doing and start stalking the catacombs of CastleVania. Dracula is waiting.