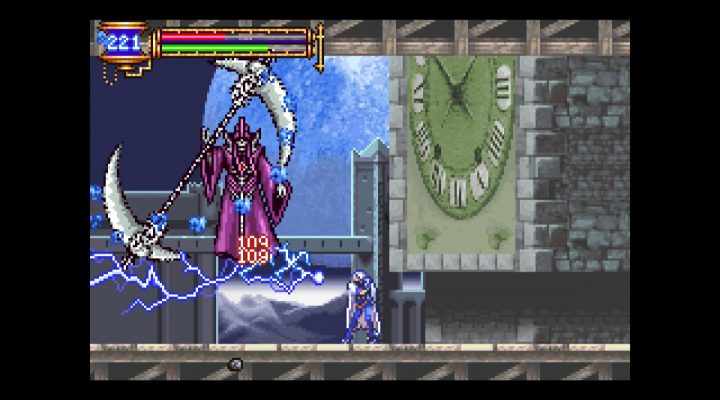 Aria Of Sorrow is sublime

The Game Boy Advance is often criticised for having hosted far too many ports of classic SNES titles – but when it came to the Castlevania series it was no slouch.

Instead of just bringing Super Castlevania to the handheld and being done with it Konami instead released three all-new adventures on the system. And they all still hold up well today, as this collection ably demonstrates.

All borrow the set-up started by the Playstation’s Symphony of the Night – they’re 2D platformers which see you exploring worlds which open up as you gain more abilities and weapons.

So a double jump allows you to get to previously inaccessible spots for instance. There’s also a streamlined RPG element where defeating enemies gains you points to level up and get stronger, allowing you to grind if you feel the need (and at certain points you certainly will).

The games themselves all have their own tweaks to this formula, with varying degrees of success. Circle Of The Moon (or just Castlevania in Europe) has a Dual Set-up System where you can activate various special abilities for example, but it is nowhere near as interesting as it sounds because the cards you need aren’t always easy to find.

The light and dark worlds of sequel Harmony Of Dissonance are a bit more interesting, but the game is too similar to Symphony of the Night. The difficulty curve is also a bit lacking – it’s all too easy for the most part.

Konami really did strike it lucky with its third effort Aria Of Sorrow though, which is still a supremely impressive title and (whisper it) arguably even better than Symphony of the Night.

Set in the near future it fine tunes the Metroidvania formula to the nth degree, with the ability to gain new weapons and moves by absorbing enemies’s souls – which also allows a huge amount of freedom in how you progress through the game.

It’s incredibly well balanced and has the best visuals and enemy design of all three games to go along with that too. By this time Konami had clearly mastered developing titles for the the system, and it shows.

In terms of the overall package itself, it’s solid if not without its flaws. A few are almost inevitable, with the Game Boy Advance’s original 240 × 160 pixel resolution not translating well to play on the TV.

There’s not even an option to play the game in a shrunk down view to match the GBA’s screen size in handheld mode though, which seems a tad lazy.

The addition of late era SNES game Vampire’s Kiss is also welcome but only really adds superficial value to the package.

Ultimately, there’s a lot of quality adventuring to be had here however – with Aria of Sorrow in particular still one of the best entries in the entire Castlevania series.

Doors: Paradox Review – When is a Door Not a Door?

Dragon Quest The Adventure of Dai: A Hero’s Bonds Review – More Than a Mouthful