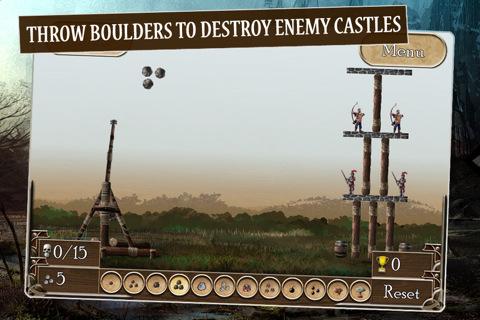 Have you ever stopped and thought to yourself, “I really want to crush someone with a giant rock that I’ve just heaved at them?” If you have, then I’ve got some good news and some bad news. The good news is that Castle Clout, a trebuchet-firing game in the same vein as Angry Birds has just become available for iOS devices. The bad news is that the game isn’t nearly as awesome as its concept would leave one to believe.

The basic premise of Castle Clout is that players are meandering (with their trebuchet) across a continent that is positively littered with towers, all of which are just begging to be destroyed. Why are they traveling across the country? Who knows? Who cares? Folks don’t really need an excuse to unleash mass chaos on passive medieval populations, do they?

The gameplay is pretty basic: players fire shots from a trebuchet across a 2D map at a “castle” that houses a number of figures who have to be killed. Apparently these castles were constructed by a particularly lazy version of the Three Little Pigs, since they’re often built out of wood and will collapse at the lightest tap from a single shot.

As the game progresses there’s some extra challenge added into the equation by including friendly figures who have to be spared during the assault. In some levels this isn’t a problem, but in others —like when they’re in the middle of the besieged castle— successfully taking out one’s enemies without killing one’s friends is a bit of a crapshoot that’s frequently more frustrating than anything else.

On top of all this, the controls just don’t work all that well. There are two methods to launch attacks, “classic” and “precision.” The classic version requires players to tap on the trebuchet in order to make it start to swing. After that, players have to tap the siege weapon again when they want the ammunition released. Figuring out the timing for these kinds of shots is much easier said than done. Meanwhile the precision controls allow a player to draw a line corresponding to firing direction and power; this method works better, but successfully making a shot is still tougher than it should be thanks to problems with the game’s camera.

Much like the controls, the visuals here don’t really work all that well. The graphics look pretty basic and appear rather fuzzy on the Retina display; this is problematic at times because it’s not always easy to tell which figures are hostile (and need to die) and which ones are friendly (and can’t be hit without losing the level).

Additionally, there’s no way to zoom in or out on the map, which makes it difficult to aim accurately. It’s really irritating that there’s no way to see where one is aiming, which means that resetting the level is a pretty common occurrence. 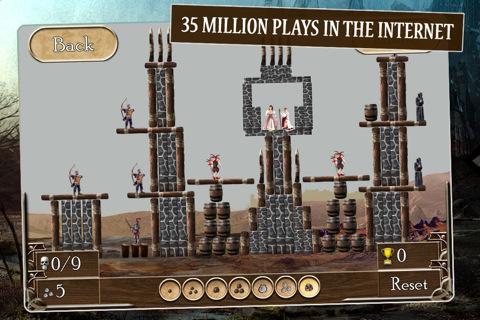 The sound, meanwhile, is OK. On the iPhone’s speakers, it sounds incredibly tinny and unattractive, but is actually a lot better when headphones are plugged in. That said, the music is pretty much the same short loop over and over again. The death screams and groans, too, are funny to listen to, but only for a while before they feel old.

In addition to the 150-level campaign, players can also create and share custom levels. Again, this is way better in concept than it is in execution, since players are forced to use a clunky interface to assemble structures and place figures. Instead of being given the opportunity to place, rotate, and resize specific structure items, players have to use a menu to choose each piece, then return to the map and place them. There’s no undo or erase option, either, so assembling a good map requires a lot of patience, planning, and a library of four-letter words to be shouted every now and then.

Castle Clout is technically fine, but it’s not really all that much fun to play. That’s really too bad, since it feels like a lot could’ve been done with a premise like this, especially if the developers had decided to ham things up a little and make the game particularly ridiculous. Instead, it’s a title that’s merely interesting, when it really should be striving to be fun.