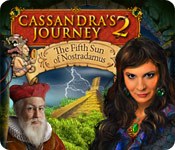 Skeptics have tried to debunk his prophecies for centuries, but the popularity of Nostradamus still endures. His uncanny ability to predict the future (or to appear to do so) has long captured the popular imagination. Cassandra’s Journey 2: The Fifth Sun of Nostradamus plays masterfully off of this  fascination, re-imagining Nostradamus as a psychic guide who will help you prevent the end of the world by seeking out hidden objects, playing mini-games, and solving riddles.

The game picks up where the original Cassandra’s Journey: The Legacy of Nostradamus ended, with Cassandra as a practicing psychic investigator who’s doing her best. This game calls for her to solve a missing persons case, as a man named Michael as gone mysteriously missing. Picking up Michael’s trail is easy, but it turns out that the cause of his disappearance was an ancient evil spirit from South America that’s attempting to bring about the end of the world. Nostradamus, of course, intends to help Cassandra put a stop to it.

There’s more effort and attention to detail evident in a single level Cassandra’s Journey 2 than some developers invest in entire games. There’s very little of the rote repetition in the level design that can make a middling hidden object game get tedious after awhile. Instead every level offers some totally unique theme or gimmick to the object-finding.

There’s one where you gather up ingredients and cook a meal, one where you’re searching through a bazaar and need to spend money in order to obtain an item, and even a devilishly challenging level where you need to find 27 parrots that are cunningly hidden in a verdant rain forest. You never get images as clues, instead having to work from more challenging hints like object names or short riddles. Cassandra’s Journey 2 keeps the difficulty expertly balanced with what is easily one of the best hidden object hint systems to date.

Most hidden object game hint systems just point out exactly where an object is hidden in a given level. Cassandra’s Journey 2 instead uses a system where a meter slowly charges with energy. You can choose to spend your hint meter’s energy on different types of hints, depending on how much help you want. The weakest hint will only indicate what quadrant of the level a target object hides in, while the strongest simply tells you where a given object hides. There are five types of hints in all.

The option to spend on only weak or vague hints when stumped does wonders for the gameplay. You no longer have to choose between being stumped or just making the game hand you the "answer" to your current problem. You can instead try to nudge yourself along to "ah-ha!" moments where you realize what mistake you’ve been making. This makes completing the game’s main storyline feel a lot more rewarding, though the extremely polished presentation helps a lot, too. The graphics are artfully crafted from photographs of actors and photo-realistic backgrounds. Cutscenes are fairly attractive while many of the levels you search through are gorgeous tableaus.

Cassandra’s Journey 2 is not without a few flaws, but they’re all very minor. The plot climaxes rather abruptly, ending on a cliffhanger that is clearly going to be resolved in a forthcoming sequel. The mini-games you encounter between levels are a bit forgettable, but can be skipped over. The photo-realistic graphics can result in some pixel-hunting when clicking onto oddly-shaped objects, especially those with spindly parts. You may have to click two or three different areas of an object before a click registers, but this is infrequent and won’t hamper your in-game progress.

It is rare and a bit wonderful to encounter a hidden object game that is as polished and fun to play as Cassandra’s Journey 2: The Fifth Sun of Nostradamus. You can play the game’s various mini-games and fortune-telling tricks from the main menu, but it’s the core story mode and its intricately designed levels that will win most players over. You can expect a solid six to eight hours of play from this title, gameplay that was good enough to make me forgive the sequel-bait ending. Instead I take it happily, as a promise that I’ll eventually get to play another Cassandra’s Journey title.