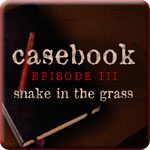 With the last installment of Casebook (Casebook Episode II: The Watcher) we were left hanging as a murderer got away with his terrible crime. Now, Burton’s back on the trail in Casebook Episode III: Snake in the Grass as you accompany him to follow the murderer to his new life. But will Burton succeed in catching him red-handed and proving that he’s really the killer he is, or will he get away yet again?

In the newest Casebook title by Clocktower Games, Burton just can’t let his previous case go. With Hapman getting away successfully and sending Burton a morbid painting that made things personal, Burton is more intent than ever to catch him. Breaking protocol, Burton tracks Hapman down, all while assuming a false name and working to catch him without approval from the department. But Burton’s cover won’t last long, and it could potentially put his very career at stake. It’s a case of all or nothing this time.

Casebook Episode III follows the same format as the previous titles in that you’ll be exploring rooms and environments openly. A new feature has been added to the game in that you can actually play a couple of mini-game puzzles, but their appearances are minimal. Unlike the previous titles, this game cuts back on gameplay and focuses much more on story development through movie scenes, of which there are many lengthy ones.

The story of Episode III is much more involving and interesting that the previous titles. The acting is also very well done, although Burton’s obsessiveness over the case often seemed overdone, and could have perhaps been toned down a notch.

Having a lengthier and more detailed story came at a cost, however, and that cost was gameplay. Casebook Episode III only features three gameplay areas. These areas do feature better resolution than the previous titles, however sometimes they’re difficult to navigate and clues are often far from easy or even moderately reasonable in difficulty to find. Without the help of the "i" key for help, it’d be extremely difficult to finish this title. (On the plus side, when you do use the "i" key it’s extremely helpful.)

Game objectives are still on the confusing side, with some appearing randomly and others being crossed out without an obvious end to them. There seems to be no particular list of items that clears a single objective.

The in-game camera, which is used to gather evidence, hasn’t seen any changes since the previous title and can still only hold eight pictures at a time. These pictures can be processed back at the crime van as evidence with a short sequence of tasks, not unlike a mini-game yet still too short and straight-forward to be considered such. Evidence linking in this title is a little more obvious than previous titles, which is a plus.

Movie scenes, which take place during the course of the game, can be reviewed and replayed by accessing the notebook. Notes have also been added next to these replay options, which is a nice touch and very helpful for players who may need to backtrack. The notebook can also be used to quickly move from one location to another.

One issue that’s definitely worth mentioning is the large fluctuation in sound. Players will likely find themselves turning up their speakers very loud to hear something one moment only to have to turn them down drastically the next. Movie scenes versus in-game dialogue have very different sound levels that cannot be adjusted from anywhere within the game.

Overall, Casebook Episode III offers a good story, but not quite as much gameplay as would be expected. It still stays true to the unique fundamentals at its core in simulating crime scene investigation, which is still welcoming to new players. However, new players would probably be better off playing a different title from the series first (like the free introductory chapter Episode 0 – Case of the Missing Urn), as Episode III is more suitable for returning fans and veterans.