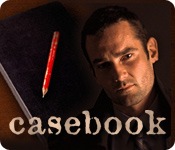 Casebook doesn’t just combine the best elements of both the hidden object and adventure game genres into one intriguing whole, couched in darker, more mature trappings than the average mainstream offering. It also introduces special technology that allows you to wander videotaped crime scenes, complete with real-life actors and locations, as if you were actually an investigator taking part firsthand in an episode of Bones or CSI.

Long story short: Two innocent children have gone missing, and the list of suspects and possible motives behind the kidnapping is trumped only by the amount of clues you’ll have to sift through to identify the culprit. Partnered with Detective James Burton, played by a real (and surprisingly engaging) person who helps provide background and leads, you assume the role of a rookie gumshoe out to crack the case.

Along the way, you’ll encounter shady characters of all sorts, many of whom star prominently in excellently played and narrated interrogation scenes or interstitial sequences, with over half an hour of video featured in total. Despite a few quality control issues – even at a whopping 937MB in size, film quality in varying scenes alternates between spectacular and blurry – let’s be honest: It’s still an impressive feat, to say the least.

More surprising though, are actual crime scenes – bedrooms, refineries, etc. – themselves, which offer panoramic views of each location composed from digital film stock. Click the left mouse button, and you’ll actually stroll through them in real-time, as if you really were looking through the eyes of the main character.

Color us impressed; whereas most competitors would force you to watch a canned movie clip before taking another action, here, it’s as if a camera smoothly pans to shift one’s perspective on-command. In other words, while you wander past piles of objects from frayed rope links to discarded bottles, and look under covers for stray hairs or scour floors for footprints, the video reel basically pauses and seamlessly resumes on-command. Not too shabby, even if each area you’ll explore is of limited size and scope, and visuals quickly turn muddy when viewed a distance.

As for play itself, the action mostly consists of examining these nicely-portrayed locales in first-person, right-clicking to pull out your camera when an object of interest is spotted. Useful items are then highlighted in a viewfinder that can be zoomed in and out or maneuvered as needed to snap a shot, with images filed away in your digicam’s internal storage bank. Once full, you can exit to a crime scene van, where photos are fed into a computer and your Scottish-accented pal back at the lab helps decide what’s of importance and which items are simply red herrings. (And believe us, there’s plenty of false leads…)

Afterwards, multiple mini-games – dusting for fingerprints, triangulating phone feeds, spinning your mouse to run test tubes through a centrifuge, generating water ripples to separate strands of DNA – are played. Once done, you’re left with snapshots that represent information and clues directly relevant to the case. These pictures are then placed in a folder, where leads can be clicked on and linked to further the investigation.

Thankfully, like frequent story interludes (which one can optionally skip if you’re not into all that wordy exposition), Burton and the boys at HQ are there to provide regular insight or tips. You can also hold down the “I” key (for intuition, natch) in a pinch, causing the game to point you towards any evidence you may have overlooked.

Parents should be aware: Featuring mature themes such as drinking, violence and the use of sedatives to subdue helpless victims, the game isn’t a good fit for younger audiences. But it’s no worse than anything you’d see on TV, and – high degree of repetition and backtracking aside – gets by mainly on the quality of its storytelling and presentation, in fact.

Bearing this in mind, if you find yourself hard-pressed to pull away from the average episode of Law & Order: SVU or Without a Trace, hey… Don’t be afraid to give Casebook a shot. Just be aware that, like the serials from which it draws inspiration, this title – first in a series of episodic outings – is guaranteed to prove short, sweet, topsy-turvy in parts and slightly morbid, but sure to have you coming back for more.