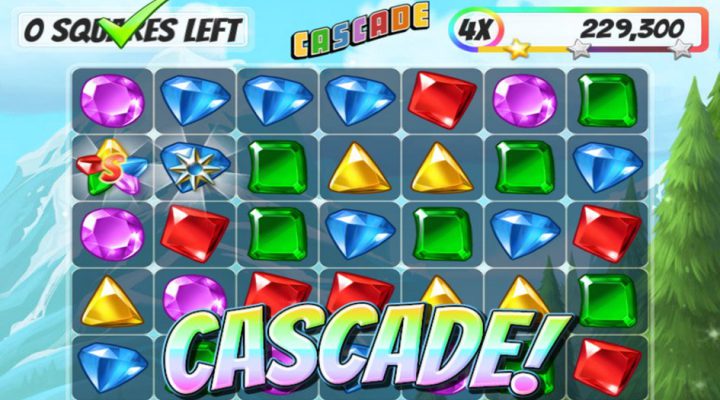 Easy to learn, difficult to master

None to speak of

Last March at the Game Developer’s Conference, Big Fish Games showed an odd little match-three/slots hybrid called Cascade. At that time Cascade was a work in progress with a few remaining rough edges, but even then its potential for transforming the match-three genre was clear. Happily, now that the finished product’s been released, we get to see that genre-changing promise fully realized.

In match-three terms, Cascade is fairly familiar. The main idea’s to match three or more colored gems in order to create powerups and score big. If Cascade had nothing but this going for it, most of us would probably put it down pretty quickly; as it is, the game’s slots aspect is the hook that’ll likely keep gamers playing ’til they wear out their tablets. 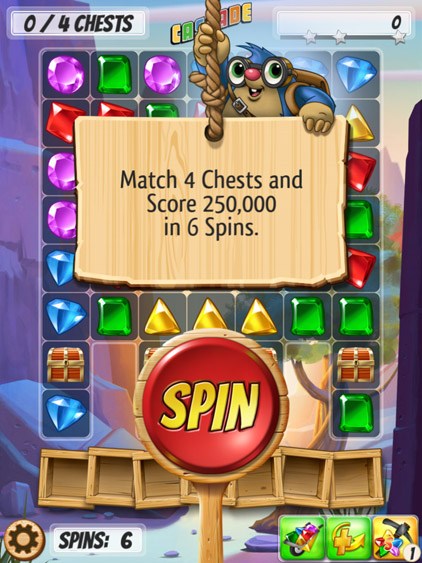 Cascade stars a cute little guy called Jasper the mole who’s something of a gem-addict. You’re his enabler, and as such, help him collect gems. Doing this takes equal parts strategy and luck, a dual focus that’s as good for expert match-three players who understand the importance of manipulating the playing field, as it is for more casual players who often rely on luck to save them.

You start each level with a set number of spins. By hitting the slots-like Spin button, you bring up a row of randomly-colored gems at the bottom of the screen that need to be matched. You tap to “fling” these gems upward (they’re restrained to their corresponding columns) to match three or more of the same color. Matches can be done in any configuration (as opposed to being constrained to horizontal and vertical) as long as they’re adjacent.

If you can’t match all the Spin gems, you have to spin again for a set of new random gems. Run out of spins and the level’s over. If you can match them all however, you keep getting free spins and racking up points. Clearing levels depends on reaching preset score thresholds, and scoring well depends on creating “wild,” “super wild” and “burst” powerup gems to create combos called “cascades.” The concept is simple, but making effective use of your limited supply of randomly-spun match gems takes some real thought. 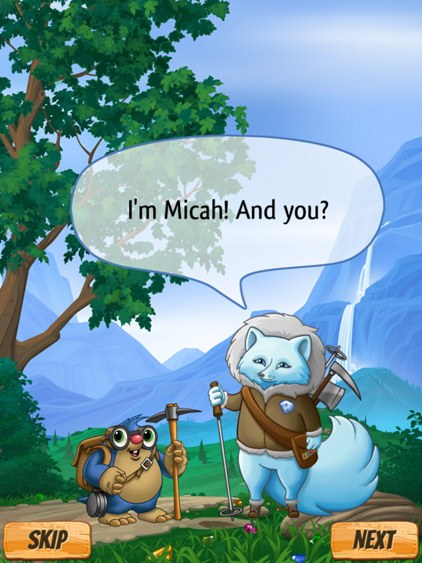 Many match-three games pull us in with forty to fifty fast, easy levels, then spring the harder ones on us all of a sudden, knowing we’ll happily pay to get past them. Cascade handles things differently by ramping things up more gradually, but earlier. It does this by inserting tricky board configurations, score requirements, obstacles and other objectives (like dropping treasure boxes to the bottom). What could be a frustrating approach actually works though, mainly because the game recharges your lives so quickly.

An ironic truth most of us know by now is that free-to-play games can get expensive. By doling out gameplay in five-minute chunks, they try to force us to pony up the dough in order to have more. If we don’t, we’re stuck waiting countless hours for our lives or energy or what-have-you to recharge. Cascade uses a much more generous approach. At less than two hours, it charges up relatively quickly, and this makes it easy to retry those more difficult levels without spending a ton of cash. 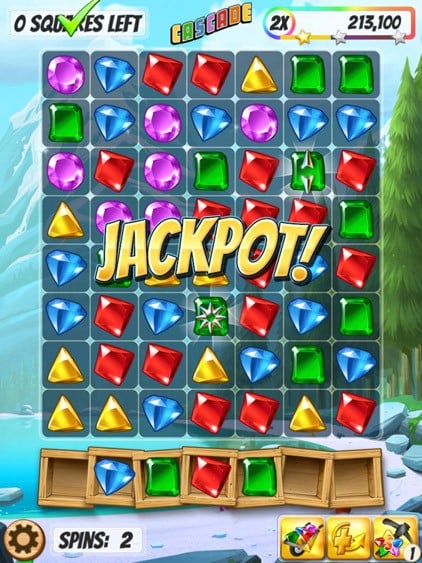 In addition to clever, crowd-pleasing gameplay and a fast recharge, Cascade looks and sounds good—there’s a simple storyline supported by cute graphics and quirky music (Jasper the mole has an inexplicable ‘thing’ for funky music.) On top of that, it hands out daily powerup prizes and mixes things up with a daily challenge. Finally, its social aspects don’t hit you over the head. You can invite friends to play if you want to, but you don’t have to spend half your time closing irritating pop-up messages urging you to do it.

Big Fish Games has long been known as a publisher of the highest-quality games, and Cascade is the latest feather in the company’s cap. Cascade is cute, smart, mentally taxing (in the best possible way) and generously free-to-play. It’s also achieved an admirable dual goal; by combining the best aspects of two incredibly popular genres—match-three and slots—it’s extended the entertainment value of both and created something new.