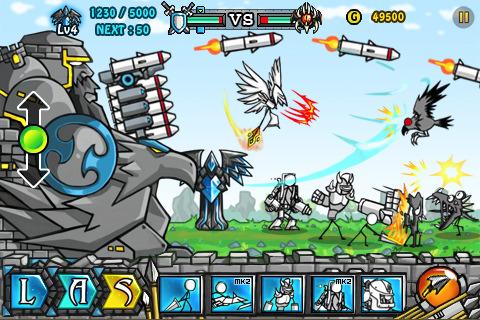 Anyone who thinks that cartoon characters couldn’t possibly engage in acts of war should probably check out an episode of two of Tom & Jerry. If Hanna-Barbera’s cartoon was still a regular fixture in this day and age, there’s a chance every episode would have to be preceded by a parental guidance warning – most of them containing more violence than you’re likely to see in your average Terminator movie.

In truth, though Cartoon Wars 2: Heroes – like its predecessor – might live up to one part of its name by serving up conflicts aplenty, the cartoons that lead the line here are less family favourites and more stick men with big knives.

That’s all they need to be, however. Like most castle vs. castle games, just what the objects are you that actually control is fairly meaningless. Success instead relies on your ability to employ a prudent yet powerful line of attack, the game rewarding ambition and coming down hard on sterility and predictability.

That’s because, if you’re unaware, castle vs. castle games are essentially mini wars fought on a 2D playing field. Taking charge of one base on the left and sending your troops towards your enemies on the right, you pick and choose from a whole variety of soldier classes, the less able taking just seconds to pop up in play and using up less ‘mana’ – the energy force that essentially keeps you in check throughout.

Even in the early stages where just two classes of cartoon combatants are available to you, the dilemma of whether to generate quick and easy soldiers that can attack in packs but are floored by your rivals with minimal effort, or to invest in bulkier, yet also costlier and more time consuming troops that will hold out for longer is constant.

The trick, of course, is to mix the two up. Throughout each battle, you’ll find momentum swinging each way (tapping the top of the screen taking you directly to the action, wherever it might be), with responding to events rather than simply sending out troops ad infinitum the best tactic. For instance, if your base is surrounded, the lowest ranked fighters – deployed en masse – can be the best way to hold out.

Employing the tougher troops, albeit more sparsely, can conversely be the key to advancing on your foe’s hideout., with victory resting on your ability to take out the enemy’s base before your own falls. 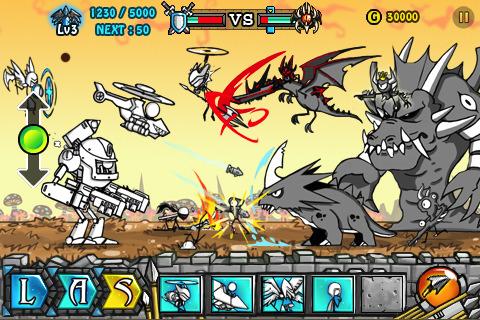 In addition to your troops – which, as you earn gold from each level, are available in increasingly battle hardy form and can be upgraded accordingly – you can also fire arrows from the top of your base (the angle altered accordingly to make it fire further into the action) and special moves once unlocked.

However, all of this is especially true of most castle vs. castle titles. On iPhone alone, the likes of Armageddon and Battle of Puppets are two notable entries, serving up similar action to Cartoon Wars 2: Heroes in vastly different settings. What makes play here different are the shooting mini-games that intersperse the main levels, the idea being to run around shooting at leagues of fighters approaching from all sides.

It’s not the deepest addition, but does help break up play that otherwise might threaten to become a touch monotonous. Your rival will also spring surprise attacks on you, putting you in a defensive position from the word go and, ultimately, sending any steadfast strategy into the stratosphere.

It’s this decision to mix things up a bit that just about saves Cartoon Wars 2: Heroes from stumbling into mediocrity. It’s by no means a bad game and, by strengthening its troops, actually makes improvements over its predecessor, but – extra modes aside – reasons to buy Cartoon Wars 2: Heroes over its numerous rivals are a little thin on the ground.