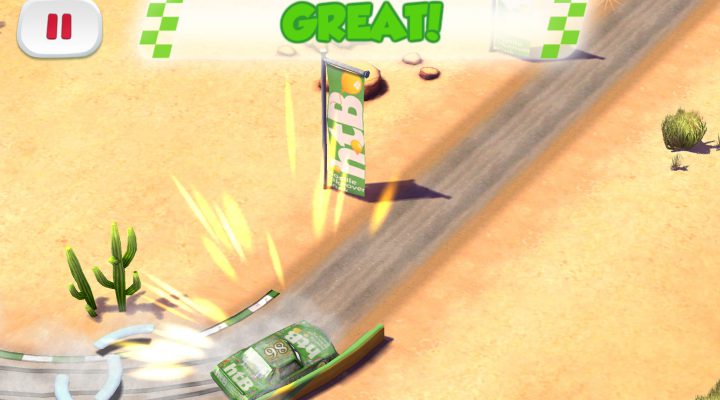 Pleasant mix of racing and city-building that young Cars fans will love.

Racing uses simple tap and swipe touch mechanics that anyone can master.

Probably too basic to hold the attention of teens or adult gamers.

Many familiar buildings need to be purchased with premium currency.

Mobile games based on licensing super-famous IPs have given us plenty of reasons to be cynical over the years, but for anyone who thinks they’re always commercials for something else, I give you Cars: Fast as Lightning. Gameloft’s latest effort is a perfectly pleasant builder/racer mash-up that’s sure to attract the attention of some younger gamers, and more impressively, doesn’t appear to be plugging anything new Disney/Pixar project.

When last we left Lightning McQueen, he had succeeded in putting Radiator Springs back on the map and saw his buddy Mater accidentally become a super spy. Now he’s got a great new idea: he’s going to let cars of all sort build their own tracks in Radiator Springs so they can challenge others to race them there. In one fell swoop, we’ve got the builder and racer parts of the game established, all while noticing that Owen Wilson is actually voicing Lightning. Nice.

Success at racing relies on very simple game mechanics. You hold down a virtual gas pedal to accelerate and ease off to go slower through turns. Every now and then, you’ll come across boost areas that give you a burst of speed with a well-timed tap, and obstacles you’ll have to pass by swiping in the direction indicated on the screen. Gran Turismo this ain’t, but given the target audience, it’s a system that works out great. 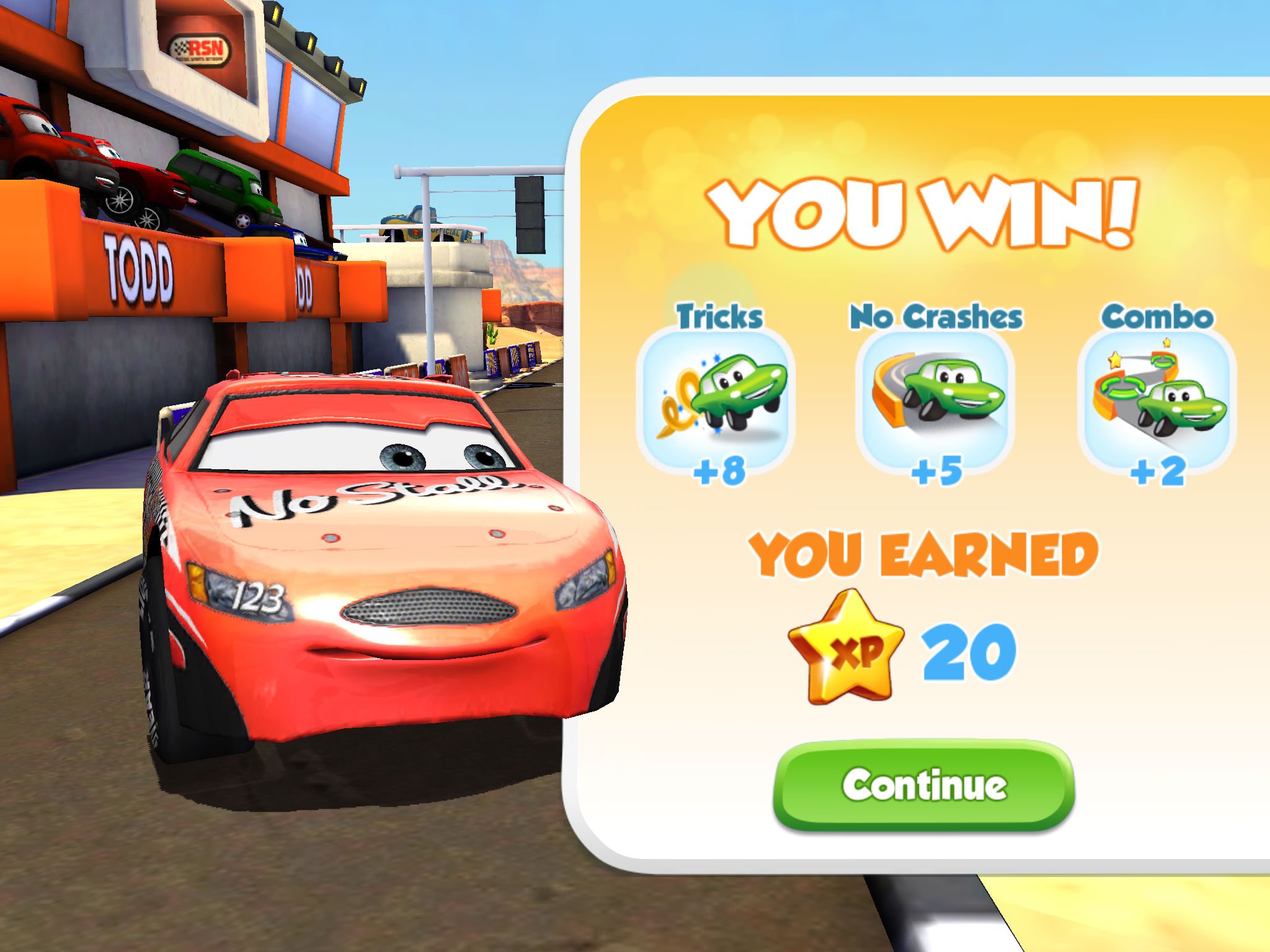 Victories earn you experience points needed to level up and unlock more tricks for your track, as well as coins to upgrade your car. No fancy multi-tiered modifications here, just a single tune-up service to increase your speed. The process does take some time unless you spend premium currency to speed it up, which is one aspect of the game that could frustrate kids.

Winning races also grants you stickers, and collecting enough of those can unlock new characters or paint jobs. The roster of vehicles includes both main and supporting characters from both Cars movies, though the main attraction, Lightning hmself, will require a lot of dedication and play time to earn. But hey, even sending Guido or Luigi out onto the track is a lot of fun in its own way.

Advancement also allows you to throw more different jumps and stunts onto the various tracks, as well as the ability to add new structures to your own little version of Radiator Springs. In keeping with the fact that this game is targeted toward younger gamers, the builder elements are about as far from sandbox as you can get, parceling out specific locations to add buildings or decorations. As with most builders, you can collect coins at regular intervals and tackle missions handed out by Lightning and Mater, so there’s always something to do.

Children might need some explanation on the gas resource that limits how many races you can tackle in one session, as well as the fact that several of the most famous Radiator Springs landmarks, like the Cozy Cone Motel or Mater’s towing yard, need to be purchased with gems. Though they can be earned through gameplay, gems are mostly there for real money purchases. To be fair, this is a game that is very upfront about its IAP status, with a lengthy explanation of the process at the very beginning and multiple times when it tells kids they should get permission from adults. You can even turn off the IAPs entirely, so this is about as safe and honest a free-to-play system as it out there today. 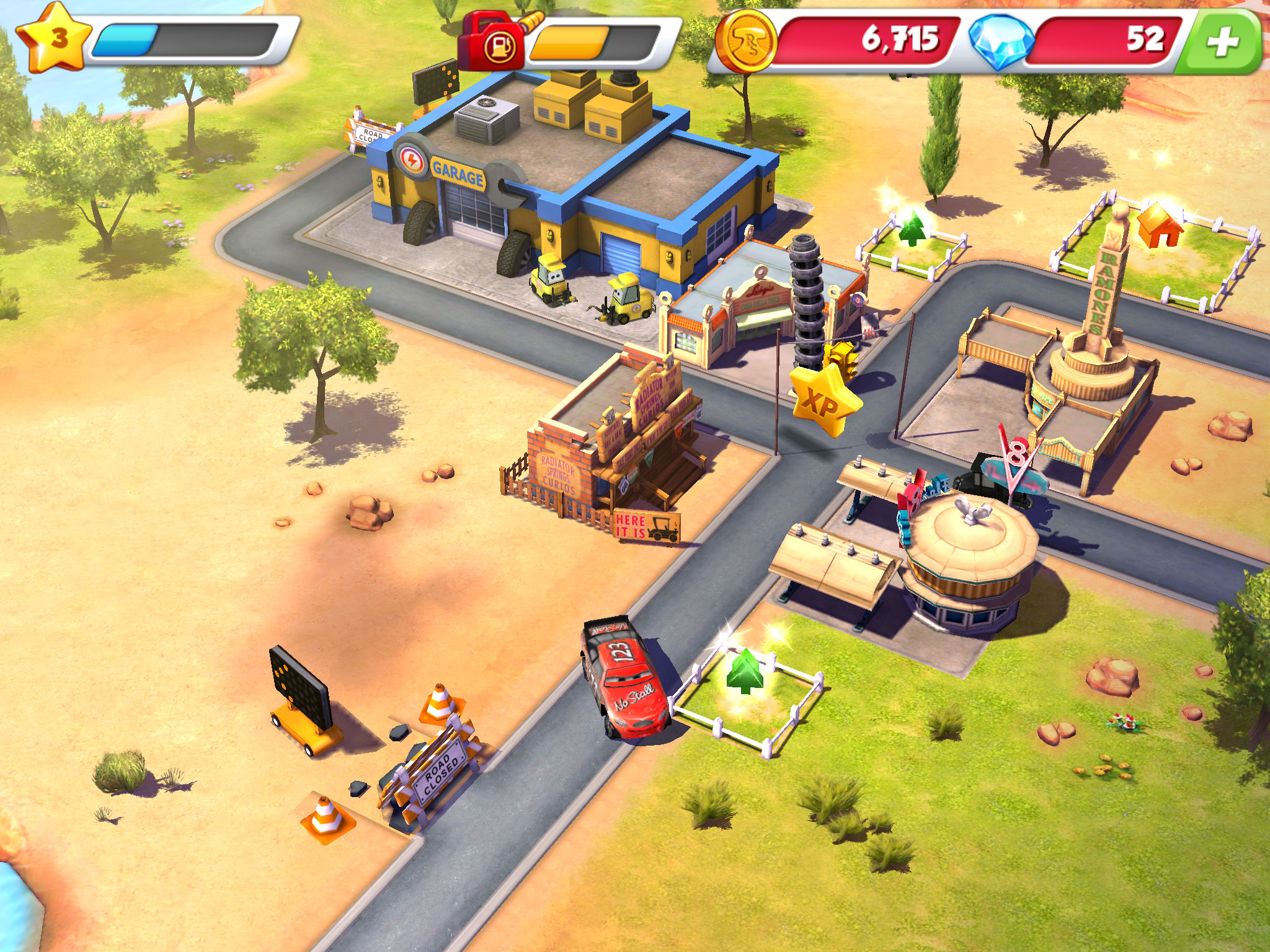 All of this wouldn’t matter if Cars: Fast as Lightning didn’t look the part, and while it might not be up to clearing the high bar of a Pixar animated production, it’s certainly got the authentic feel. Having Wilson in the voice cast helps, but the characters all move and display the mannerisms you’d expect. The in-race action is appropriately cartoony, and it all adds up to an agreeable overall package.

See? No reason to be suspicous of this licensed game after all. Any kids who are still enamored with the Cars franchise are going to love this game, and parents should appreciate the fac that it’s not pushing anythng on us but itself.

Want to make it to the finish line? Be sure to read our Cars: Fast as Lightning Tips, Cheats and Strategies.