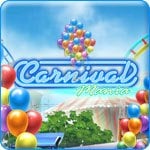 Funny thing about so-called “tycoon” games: Hardcore business simulations at heart, apart from their surroundings (zoos, hospitals, malls, etc.) and candy-colored window dressing, there’s often very little casual about them. In a happy turn though, Carnival Mania – which, like retail pioneers RollerCoaster Tycoon and Theme Park, challenges you to build your own fairground – actually does simplify play mechanics to heighten mainstream accessibility.

However, due to several design quirks and a plodding pace, it does little to expand the genre’s reach beyond existing fans, and may alternately bore and frustrate non-believers to tears.

It’s a simple concept here, really: Players are tasked with helping cartoon character Polly Diamond turn the rundown carnival where she used to play back into a must-see attraction. After having the grounds willed to her by a rich uncle, she’s allowed to upgrade the site as she sees fit, meaning you’re free to build and place structures to your heart’s content.

Cotton candy stands, refreshment kiosks, roller coasters, strength tests, magic tents and more can be utilized to bring in the customers, whom you’ll see arrive and explore the area from an eye-catching, miniaturized overhead view. While production values aren’t on par with a Zoo Tycoon, Thrillville or other major PC/console launch, brightly-shaded backdrops, animated characters and rides with moving parts do add charisma.

Of course, all of these elements belie a surprisingly tricky economic ecosystem which hides underneath, whether in sandbox or story mode, the main attraction. Assigned specific goals in each of 54 timed scenarios (build X many of a certain structure, reach Y income level, save up Z amount of cash) and six individual locations in the latter case, to meet them, you’ll need to think several steps ahead.

Managing money and resources like building materials and employees is just the beginning. As play progresses, you’ll also need to buy blueprints for newer, more expensive attractions, acquire land to build them on, sell off underperforming acts and upgrade various park elements. Never mind mechanical repairs that can shut down your cash flow as quickly as they can a hot streak in one fell swoop.

To some degree, it’s all pretty much par for the course. But as they say, don’t be fooled by a pretty face. At surface level, play is simplified to an all but universal “build a few structures, earn more cash, buy additional goods and workers, acquire extra land, erect cooler attractions, pimp out your park” approach. (A mercifully small range of menus lets you quickly source info on fairground performance, purchase plans for new rides, build different sights and perform routine maintenance.) Nonetheless, as early as three or four levels in, you’ll be surprised and confounded by the title’s difficulty, which suddenly ramps up steeply without warning.

Compounding the issue – hint: try selling off certain structures once they’ve outlived their usefulness – is the yawn-inducing rate at which the action progresses. With everything from when you get paid to how long it takes before structures are up and running or upgrades ready to roll out determined by slowly-increasing meters, much of the experience is spent just waiting around.

Pre-game intros whose text you can’t scroll through are annoying enough. But plotting out a park, enhancing it and then watching as it fails dismally time and again a good ways into the challenge because it took that long just to see if a particular strategy’s working? That’s no fun, and a problem most competitors adroitly solve by either a. being more forgiving, b. presenting a stream of helpful hints, c. providing a greater range of hands-on tutorials or d. offering optional controls to speed up time. Here, you’re mostly left to yawn and flounder instead.

That said, for all its play balancing woes and odd setup choices (why do patches of land available for purchase appear and disappear randomly?), this is an attractive game with a catchy hook, and easily comprehended implementation. We just wish more testing and deeper instructional segments had been incorporated for sake of easing the learning curve, especially from the perspective of beginners, sure to be unpleasantly surprised a short way in.

If you’ve never played a cash stockpiling sim before, take a pass: The wallet-friendly cost of the title’s nothing compared to the small fortune you’ll spend on therapy recovering from associated shellshock. But for genre stalwarts looking for a slightly more streamlined and challenging alternative to the usual loot-stacking diversion, get ready to meet your match.