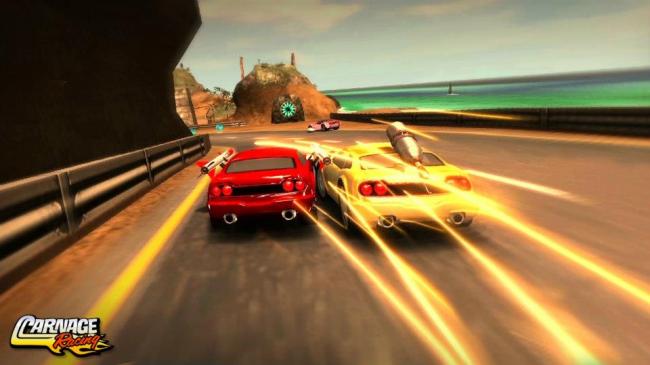 There were times during my playthrough of Carnage Racing when I had to remind myself that I was playing a Facebook game. As some of you may know, I’ve long been an advocate of the platform’s legitimacy and a fan of its slow emancipation from simple designs of games like FarmVille — but playing Primal Carnage felt like making the shift from learning how to drive to flying to the moon within the span of 24 hours. It’s all here, console racing fans: weapon powerups, competitive multiplayer (against real opponents!), and a host of upgrade options. And the best thing? It keeps social spam to a minimum.

For all that, you’d be silly to jump in expecting graphics of the caliber of Forza Motorsport or Gran Turismo. Carnage Racing remains a social game at heart, and as such it’s equipped with graphics that play nice with most browsers. Still, there’s a lot to love here. I find myself wishing we had more to choose from aside from its party time island setting, but the multiple tracks manage to achieve a sense of diversity amid the uniformity. In one race, you might careen past a tourist trap hugging the beach; in another, you’ll rocket through the molten caverns of an active volcano. The three available cars also manage to please despite their predictable “bad boy sports car” vibe, and unlockable customization options allow you to differentiate yourself from the pack.

It’s in the gameplay, though, that Carnage Racing truly shines. For one, this isn’t some loopty-loop racing game that fails to deliver itself from its own monotony; Carnage Racing instead thrives on weapons like those found in Blur and Mario Kart and–even better–a system of portals that keep races competitive until the finish line.

And that’s where the real fun begins. Maintain your speed and use the many ramps to achieve air time, and you’ll build energy on a sidebar which unlocks your Phase Shifts. Triggering Phase Shift while under fire renders you immune to the attack, and activating it a few seconds before ramming into the portal icons scattered throughout each stage opens a portal that allows you to catch up with or pull ahead of your rivals. Much as in the console hit Split/Second, the resulting juggle of leads maintains the spirit of competition until the last few moments of a race, and in all my races, I don’t think I ever encountered a player that took more than 20 seconds to reach the finish line after the winner.

It doesn’t hurt that there’s an agreeable learning curve. Movement is bound to the WASD keys or arrow keys depending on your choice, and mastering the tricks of acceleration and turning curves should pose few problems for newcomers. The upgrades tend to focus on your weapons (such as homing devices for your missiles and immediate triggers for your time bombs), and while there’s some concern that allowing players to unlock them with cash renders Carnage Racing a pay-to-win experience, there’s little to nothing here that you can’t acquire through leveling and earning gold from your winnings. 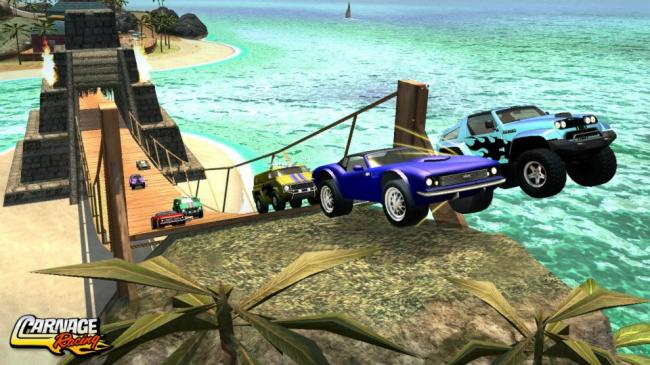 It’s easy to fall in love with Carnage Racing for its live multiplayer options, but developer Jagex (famed for the long-running MMORPG Runescape) includes options for your Facebook friends as well. You can, for instance, host a private match with them, and if you can’t ever get your schedules to overlap, you can compete against each other in timed trials. If you just like to go alone, there’s even an option to race against the seven acceptably intelligent AI players. In every step, Carnage Racing reveals itself as a rare social game that allows for multiple ways to enjoy its gameplay.

If you don’t expect Carnage Racing to perform with the hardcore niceties of more detailed racers, you’ll find that it achieves near perfection. It’s easy to jump into, but mastering its weapons and portals allows ample room for mastery. As a side benefit, it’s also sparing in its requests to add posts to your Facebook wall, revealing obvious hopes that console players normally turned off by this type of intrusive advertising will spread the word themselves. All in all, Carnage Racing is one of those rare social games that justifies itself as a “social game for players who don’t like social games,” and we’re looking forward to future updates for this outstanding new contender.