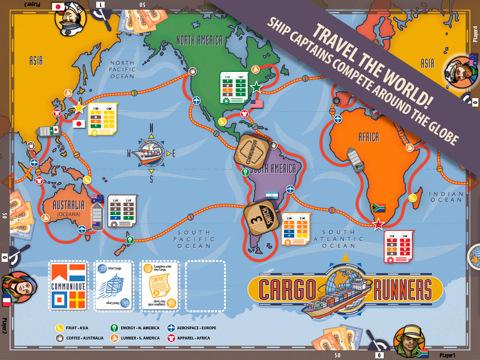 Most board games that appear on the App Store, whether good or bad, are based on a board game that’s already available in the real world. Developer Trouble Brothers takes that formula and turns it on its head, debuting new board games exclusively on iOS devices and worrying about the possibility of print production later. It’s an unorthodox plan, but it’s one that seems to work. Their first release, Wizard Hex, was a slam dunk amongst iOS board game aficionados – and their sophomore release blows their freshmen effort out of the water.

A board game for two to four players, Cargo Runners pits gamers against each other in a race to become the richest shipping baron on the high seas. Each player will control a single ship, and they’ll move that ship from port to port collecting different cargos. The game features six home ports, and each home port offers a contract that needs to be filled. Different contracts require different combinations of cargo, so while they might want a shipment of four fruit in Tokyo, you’ll be able to claim a contract in London by trading in two aerospace, one energy, and one coffee. Since each ship can only hold four cargo at any one time, you’ll have to be picky when deciding which cargo to load onto your ship. 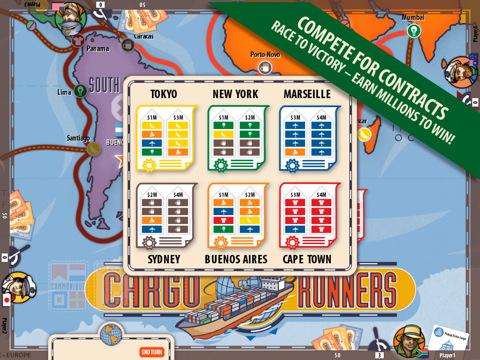 Once a contract is cashed out, it’s closed to prevent other players from claiming the same contract. So if two players are both racing to claim a $4 million apparel shipment in Capetown, the first player to get their will see a hefty payday while the loser will be looking for a place to dump their now useless cargo.

Other elements, like weather events blocking certain pathways and labour unrest shutting down cargo production on select continents, add a nice random element to the game that would otherwise be missing. You might be three ports away from winning the game only to be blocked by a storm in the Bermuda Triangle, which would then force you to reach New York via the lengthy route down through South America, Africa, and finally Europe.

The game also features a nice element of card play that can both improve your odds and sabotage your opponents with a great touch of “take that!” gameplay. Some cards may benefit the entire table, like removing a weather element or labor embargo. Others may help only you, letting you pick up double cargo on your next turn, or cash in on any contract using any cargo. And then there are the great cards that really stick it to your opponent – like stealing their cargo, or moving the location of a certain contract so that they’ll need to travel halfway across the world to drop off their load. Since players can only hold one card at any given time, and some of the cards disappear after a single turn whether you’ve used them or not, you’ll need to put a lot of thought into the cards you’re choosing. 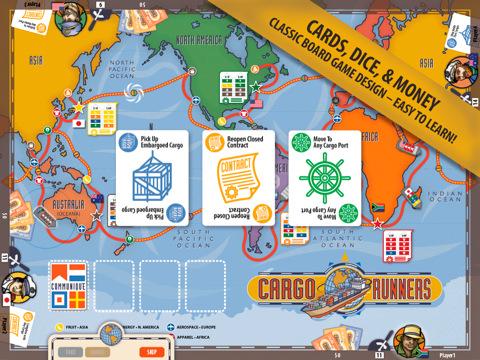 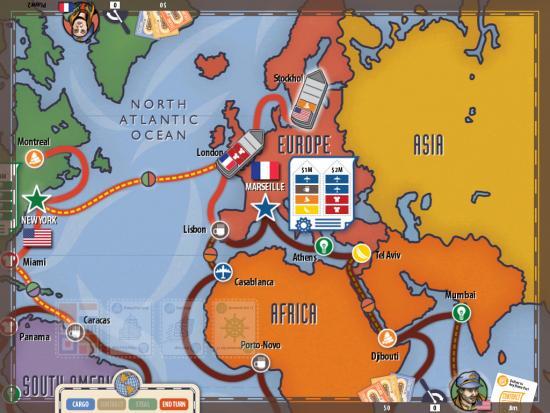 Don’t get me wrong – board games are meant to be social activities and they’re always more fun when played with friends – but one of the big advantages of digital devices is that you can have a single player experience with an AI opponent to help you learn the game, practice the game, or just enjoy the game if you don’t have a chance to play with others on the go.

I, for one, love taking my iPad with me to the park to enjoy games while sitting in the grass and breathing in the fresh air. And more frequently than not, it’s iOS board game experiences like Small World that I turn to in such situations. I’d love to add Cargo Runners into the rotation, but since I’d be in a situation without WiFi or friends to play with, I’m completely out of luck. There are lots of situations like this where real people and WiFi connections are in low supply – Cargo Runners simply can’t cater to those in its current form.

Still, despite the lack of single player support, Cargo Runners does offer some terrific online play through Game Center. The experience moves quickly with nary a stutter, and there’s a nice notification system that will send players a friendly reminder if they’re being too slow. At the moment all multiplayer games take place in real time, but the developer assures us that asynchronous play is something they’re looking into once Apple adds it to GameCenter in iOS 5. That’s something that’s been great for digital board games in the past, and we can’t wait to see it get added here.

With a slick presentation, well-balanced gameplay, and a tremendous amount of fun, Cargo Runners is an absolute winner in our books. The lack of a single player option hurts an otherwise great package, but if you’re looking for a new board game to break out with friends or are simply happy to hunt down the online competition night after night, this one is an easy purchase to make. If you can look past the lack of AI opponents, this one is a must-buy.