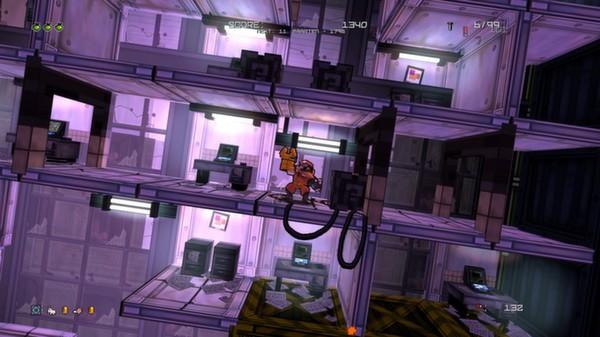 Think Spelunky in space, and you get Cargo Commander

I witnessed a talk at the Game Developers Conference in Europe this summer, in which the developer behind Eufloria discussed the many advantages of basing your game around randomly generated worlds and levels. After playing Cargo Commander, I can see exactly what he means.

Don’t let the generic name put you off – Cargo Commander is a force to be reckoned with. Choose your randomly generated mission, dive through various cargo holds in space, and grab as much treasure as possible while dodging nasty aliens. Think Spelunky in space, and you’re roughly in the right area.

You are an employee of Cargo Corp, and your job is to zip about space, finding cargo containers and extracting anything good from them for the big boss company. As you delve deeper into a series of containers, the dangers become more and more tricky to overcome, and you really begin to feel like you’re putting your life on the line.

This is because, after a set amount of time, a wormhole opens up, and begins sucking everything in – including yourself and the containers you’re hopping around in. Hence, it becomes a mad dash to rush back along the pathway you have created, and reach your spaceship before the containers drift off into space, taking you with them.

It’s impossible to state how epic this journey back home feels every time it happens, especially with the accompanying soundtrack that does a fantastic job of piling on the pressure. Sometimes you’ll come across a wall you can’t get past, and you’ll have to cut it down with your drill, while the walls behind you continue to cave in. Numerous times we found ourselves purposely moving as far through the supplied containers as possible, simply so the resulting escape would be all the more intense.

This isn’t just a game about getting in and getting out as quickly as possible, however. Whenever you get caught outside in the blackness, the music fades and an oxygen bar begins to count down. Drifting through space and attempting to reach a container, your spaceship, anywhere that has sweet, sweet oxygen is an experience in itself. 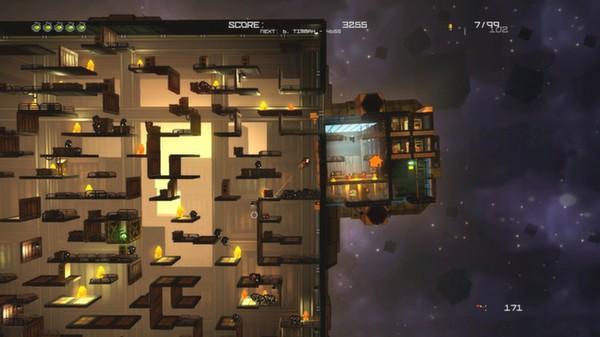 Now consider the following – Cargo Commander has infinite levels to play. When you select your world, you can simply enter any word, phrase or string of letters into the box, and a randomly generated set of containers will be supplied, along with its own online leaderboard (yes, there are infinite online leaderboards too). You could, essentially, play this game forever, and never see the same set-up twice.

This makes replayability smash through the roof and launch itself to the stars. Since each world has its own highscore boards, it’s very easy to get sucked into one particular world and continually aim for that number one spot. The game also provides a list of the most popular worlds, and will tell you which are the best to visit. It’s all extremely well designed, and we had a hard time pulling ourselves away to write this review.

Pile on top of this Steam achievements, in-game ranks and a huge variety of upgrades to tack onto your spaceman, and poof, there’s a couple of weeks of your life gone. 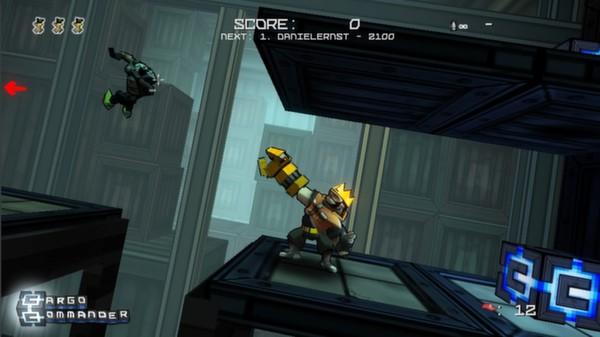 It would be criminal not to mention Cargo Commander‘s story. While it all appears to be fun, games and near-deaths, you’ll receive emails once in a while from your wife and son, and a number of the achievements feature elements such as hand-drawn pictures describing how your son believes you are the best spaceman in the world. It’s all so simple, yet so very effective at painting the picture of a family waiting for their daddy to come back home.

Gripes? Well, we’ll admit that we cursed numerous times when swapping containers – the change in gravity direction means sometimes it’s nigh on impossible to make the jump properly. Still, at least we can hit the F button and make our little guy scream blue murder. Yes, there really is a swear button. And no, we have no idea why.

Cargo Commander is a hugely welcome surprise, especially for the asking price, and we couldn’t imagine a better way to spend the next few weekends. If you enjoyed Spelunky, this should be on your wish list.