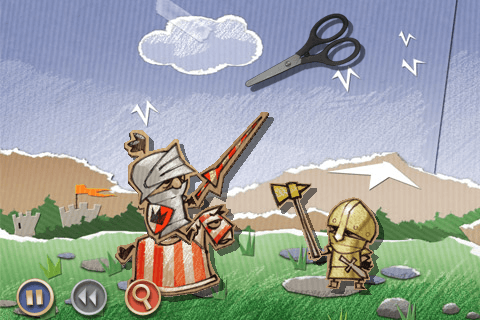 Walt Whitman references aside, Cardboard Castle is a game about a world made of paper and the trials and tribulations a knight in shining armor must overcome in such a world. Using the world against itself, you’ll chop down paper trees, light paper enemies on fire and more in an effort to reach your goal.

What really can’t be overstated here is how incredibly awesome the art style is. Everything looks cut from paper or cardboard and bigger elements even have the little corrugated edge to them. Pieces look hand colored and could have jumped right out of a child’s coloring book. It’s… adorable. The look and feel really helps when playing the game, and just left me smiling.

The puzzle solving is inventive and takes a little time to know how things react with other. This is really just done through trial and error. Cup of water combined with Tree? The tree grows an apple. Water on bad guy makes soggy paper. Sun on soggy paper dries it. Etc. There’s no list or preface telling you what does what, so in the beginning you’ll just be fiddling around to figure that stuff out.

There are 3 stories with 5 levels each, which means you get 15 levels in total. They’re all based around your intrepid cardboard knight, saving castles and damsels and such. The levels start out easy but definitely get difficult as you move on. After working my way through them all I really wanted more, but since the levels aren’t random or anything, once you go through them there really isn’t much in the way of replayability. 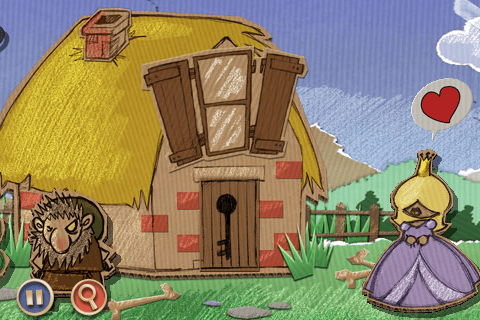 The big downside here is that on harder levels you need to execute a number of tasks in a very specific order to beat each level. Missing something or doing something wrong puts you in a spot where you can’t do anything else and you’ll need to restart the level. This is ok when you need to do 2 things, but in the later levels it’s just annoying. A simple “undo” button would do wonders. There were a few levels where I had to restart 5-6 times as I worked my way through it trial and error style.

My other complaint is less detrimental, but jarring to those of us that use our iOS devices alot. The gentle swipe controls that we’ve all gotten used to often don’t trigger anything in the game. Other games and apps have a great sensor for brushing the finger to and fro across the device, it’s one of the really great feelings of using it. So when you swipe and it doesn’t do anything you’re just left confused. Especially when it seems haphazard. Sometimes it works, sometimes it doesn’t.

Cardboard Castle isn’t without its problems to be sure, and some of them are bigger than others. But I think the look and feel of the game make up for those issues for the most part. It’s a short but enjoyable ride that’s definitely worth the price.

Adam’s Venture – Episode 1: The Search for the Lost Garden Review