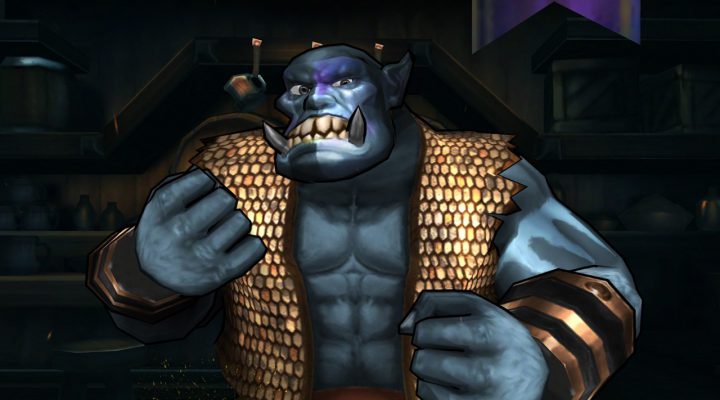 Stuffed with the usual free-to-play elements.

This past March I reviewed Card Crawl, a fun little dungeon-crawling card game that I was pretty sure was going to be the best new card game I played in 2015. Even though the game lacked variety at the time (it’s since been spiced up a bit), I found the game mechanics fun and challenging to learn and play.

Card King: Dragon Wars is quickly rising up to meet, and potentially surpass, Card Crawl as my favorite new card game of this year.

For one, on a surface level, the game looks great. I love the art style, and how each character I face feels distinct and unique. It’s just enough of a change to keep the game feeling fresh long after I normally find card games beginning to stale. Your opponents are not simply static pictures; they’re living, breathing creatures whose facial expressions reflect their current emotions. Destroy one of their creatures? They might look nervous or pissed-off. Defeat them? They may slam their head into the table or sneer at you while fiddling with their very pointy dagger. 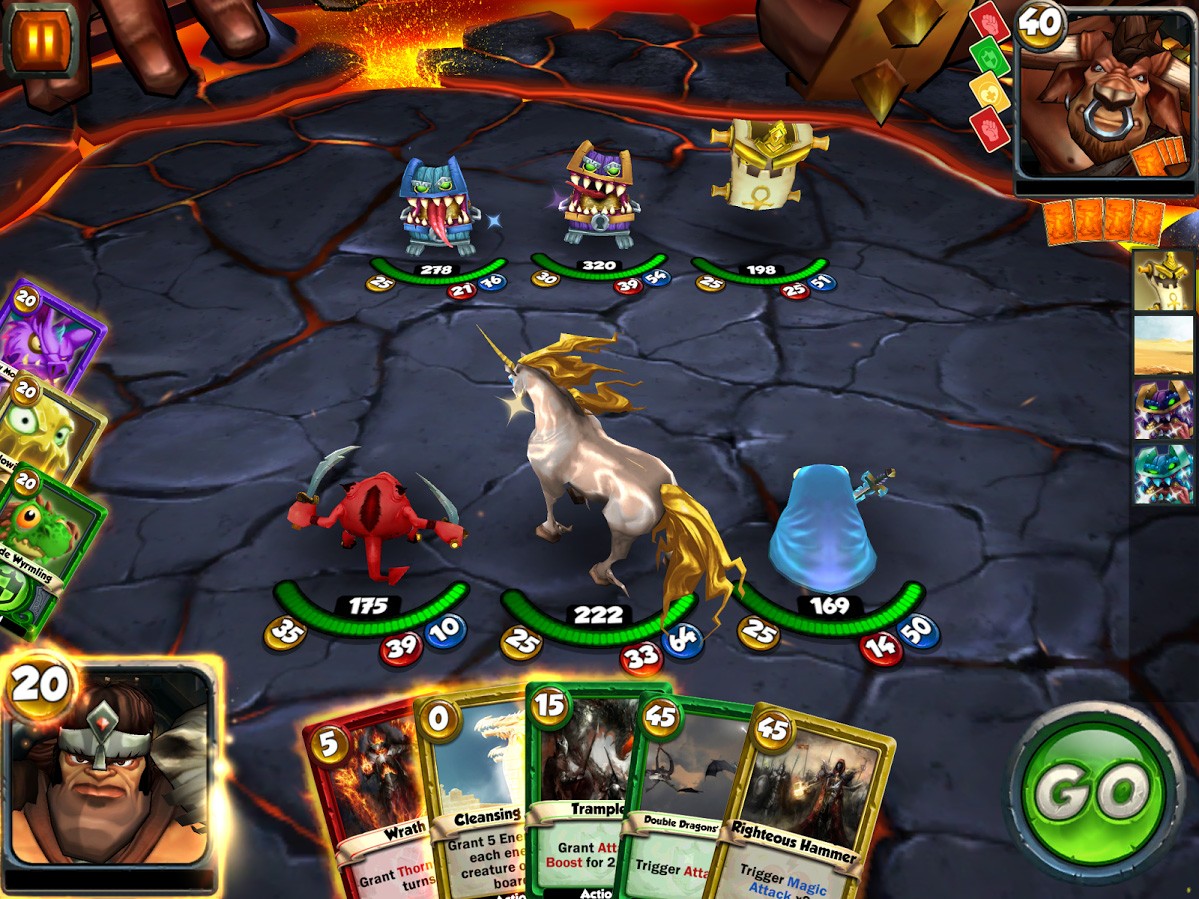 Yet with as much character variety as your opponents have in Card King: Dragon Wars, you get absolutely none. I wish that I was given the option to play as someone beyond a big, burly, barbarian man. I would have loved to be able to pick to be one of a handful of characters, even if only for aesthetic purposes. Being able to choose a character would have allowed me to add a bit of my own personality into the game, and while “big, burly, barbarian” is an apt way to describe yours truly (especially if there is beer and BBQ-anything involved), it would have been cool to have been an Orc, or a Dwarf. Or an Orc-Dwarf. The possibilities are endless.

While this certainly doesn’t affect the gameplay in the slightest, it felt like a missed opportunity that the characters are so lively and I’m stuck as a barbarian. “WIZARDS AND WARRIORS. READY YOUR DECKS,” the game advertises in the iOS store. Too bad only warriors came to answer that call. 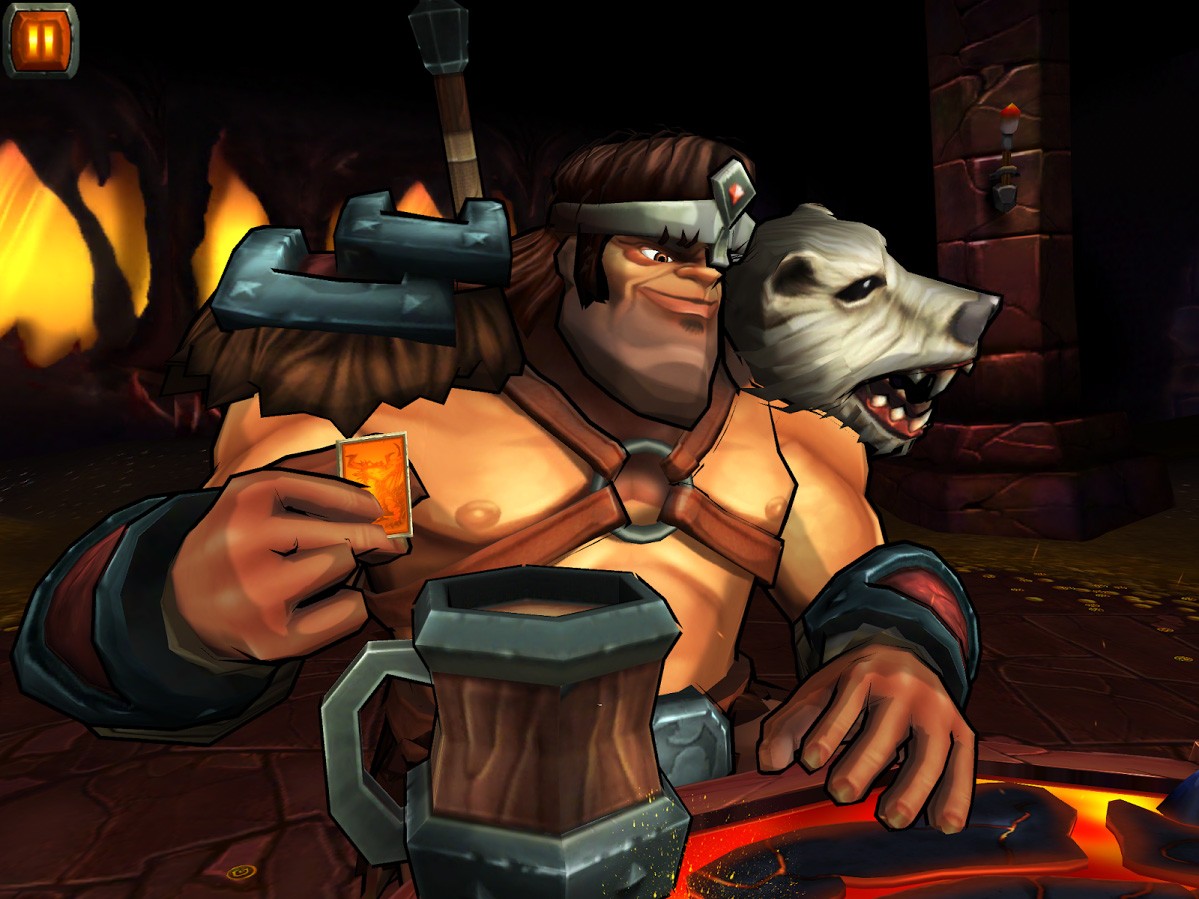 Speaking of gameplay: if Pokemon and Hearthstone had a baby, it’d be Card King: Dragon Wars.

While the game has its fair share of free-to-play tropes and chores, at its core the gameplay can best be summarized thusly: you build up a team of critters, and then use their ability-cards to defeat your opponent’s team of critters. Initially I was thrown off by the fact that my critters were not cards themselves, and that the only way to get more cards is to attack critters, but it didn’t take long to get a firm grasp on the gameplay mechanics and really fall into the flow of things.

Card King: Dragon Wars is all about playing your own team of critters off of one another in an effort to bring down your opponent’s team. You can finger-drag your critters into the enemy critters Hearthstone-style, but that will not be using your team at their maximum potential. The only way to achieve maximum efficiency is through the use of ability cards. You get an ability card after initiating a finger-drag attack, and the card you get is determined by the critter you attacked with. 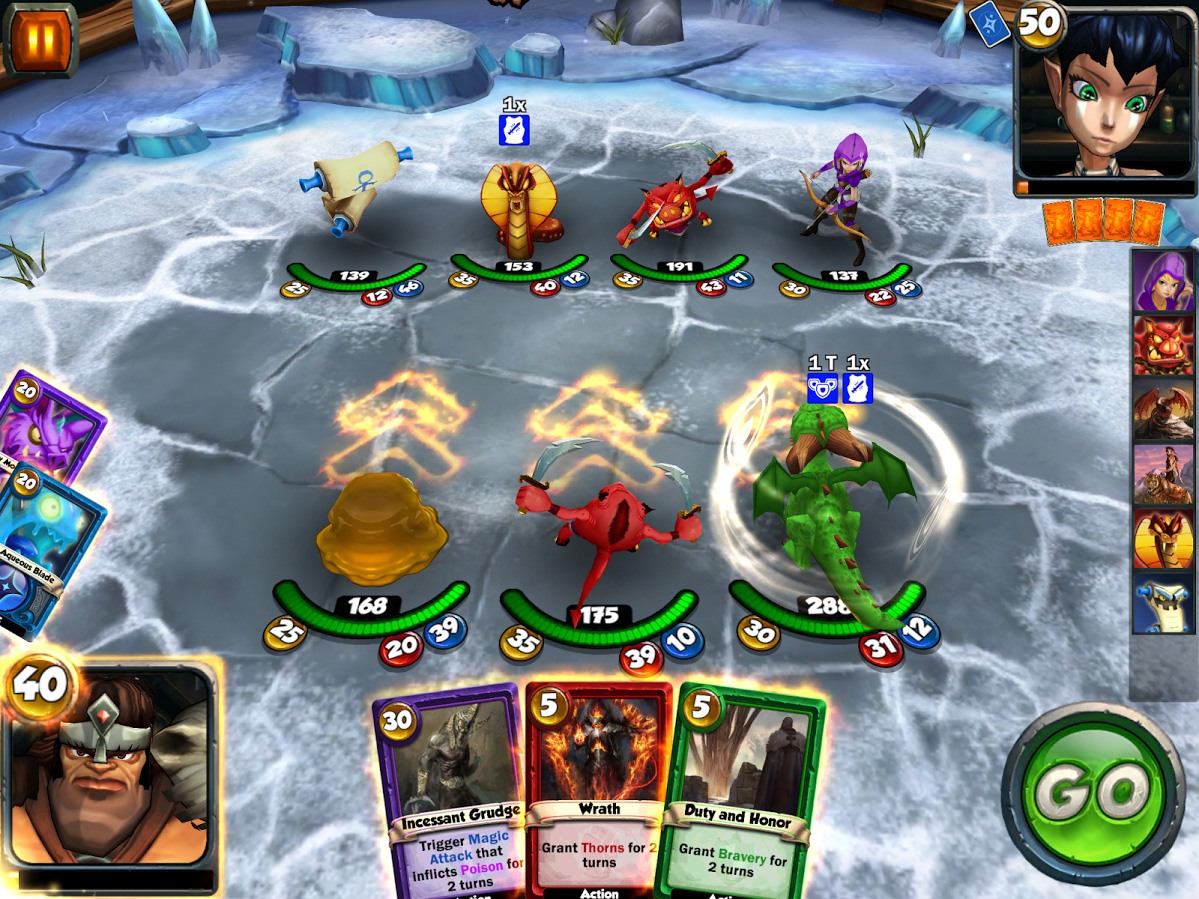 Each finger-drag attack costs you a certain amount of energy, but ability cards can typically trigger attacks for a smaller amount of energy and may even have effects like team-attack (where a group of critters can attack at once) or some other power-up. Because the mechanics are just different enough from the typical card games I’ve been playing my whole life, I found that I was given the opportunity to discover new strategic ways of playing my critters. And the fact that I can play them off of one another (finger drag to get a particular card type to power up another critter, for example) was just super fun to get into and play around with.

In between battles you’ll be doing all the usual things that free-to-play mobile games employ to keep players engaged while their energy-meter refills (yes, Card King: Dragon Wars has an energy meter that you’ll drain as you play). Players can use their lesser creatures to harvest critter eggs that hatch critters for you to use. You can also partake in player-vs-player battles, or try your hand (no pun intended) at the Dungeon events, which are tough — but the rewards more than make up for the difficulty.

While Card King: Dragon Wars may lack in avatar customization, and it features all the typical free-to-play gimmicks, it’s still a fantastic game that’s filled with lively characters and critters while offering an engaging, strategic gameplay experience.

Now if you’ll excuse me, I’m eager to get back into playing some more matches.