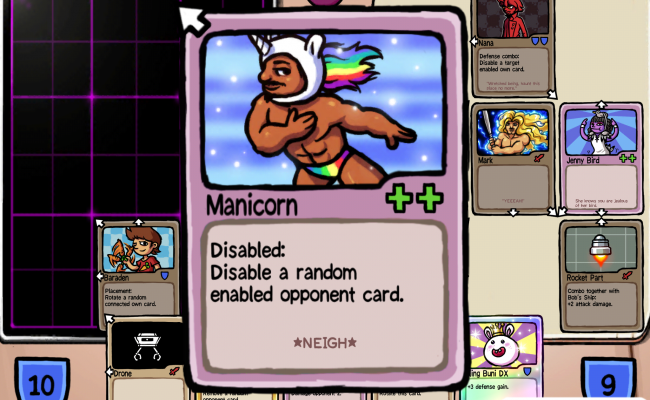 My brother and I were born only about 17 months apart. As such we usually went to the same schools, played with the same friends and watched the same shows.

We also look a lot alike. Obviously we’re not twins, but those meeting us for the first time often assumed as much. Even today people confuse us, or just refer to us by our collective last name. Our similarities meant we rarely fought, except to distinguish ourselves from one another.

We expressed our distinctiveness in the language of GameBoys. Of course we each had to have our own – not just because sharing is definitely not an option, but because they had to be different. They were different colors (mine teal, his purple), we had different carrying cases and, of course, different editions of Pokémon. 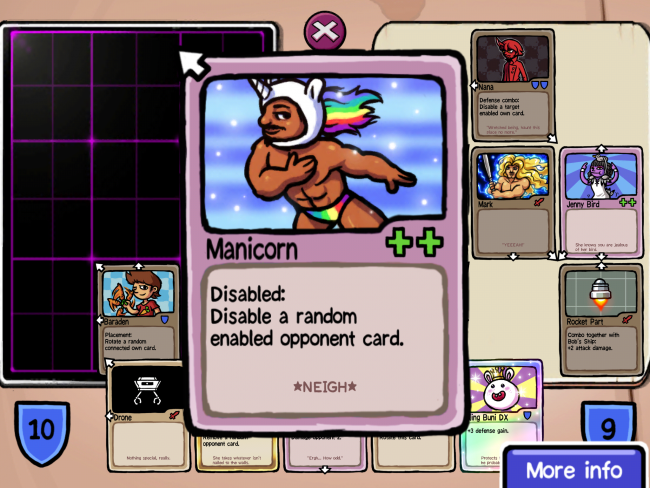 Pokémon became shorthand for our individuality: different versions, different starters, different teams and different favorites. “Gotta catch ’em all” is such a part of my early sense of self that even today, when I’ve largely stopped playing the games, it triggers a completionist itch in every game I play.

The developers at Ludosity clearly have a fondness for Pokémon as well, though they apparently had no interest in making that sort of game.

Card City Nights has all the trappings; eight masters card players block your way to the ultimate prize while you develop one-sided rivalries and build your collection. Your collection is one of cards rather than indentured, indigenous creatures, but you get the idea.

Where Pokémon is achingly sincere, Card City Nights is a just shy of cheeky. It’s not self-aware enough to call parody or subversive enough for satire. Call it two-parts love letter and one-part pastiche, then. But if this is an imitation, it’s one based on the satellite material — the card game, the anime, the movies — not the games themselves.

Ludosity’s send-up of the Pokémon franchise doesn’t play like Game Freak’s juggernaut. In fact, it doesn’t really play like the collectible card game that its name implies. It’s rather more a combination of Puyo Puyo and tic-tac-toe.

The union is played on a nine-by-nine grid with cards taking the place of falling blocks. Instead of matching colors there are arrows unique to each card that must face each other to clear a combination. Doing so can increase your health, damage the opponent or lock enemy cards on the board. 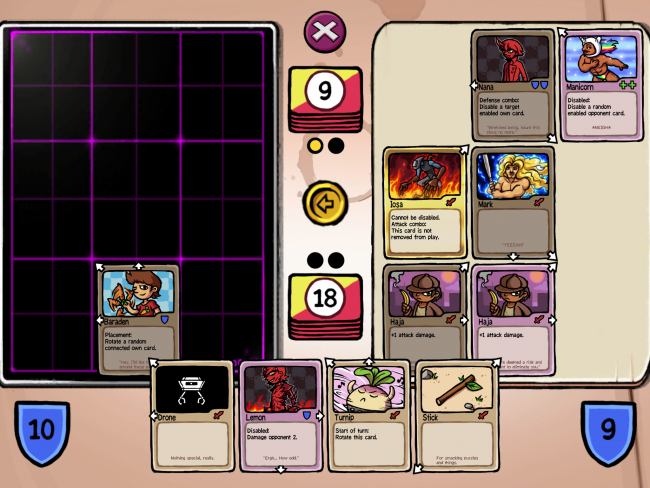 In Puyo Puyo, the act of making strong combinations also fills the enemy board. In Card City Nights, simplicity was sacrificed for customization. Decks can be designed around keeping your board clear and your health high that starves your opponent through attrition. Or, you could design a hungry, high-damage machine, built to pour damage down your opponent’s pants and burn out quickly.

I prefer a more dexterous stack. My deck is filled with versatile neutral cards (which have more connecting arrows than their counterparts) and just enough damage-dealers to lock up the opponent’s board.

These aren’t unique ideas. They are, however, unique from one another and as it turns out play quite well together. I found myself devoting Hearthstone levels of attention to its deck building and Mean Bean Machine levels of frustration when my card matching failed. The mechanics feel as though they were related from the very beginning.

I actually appreciate Ludosity’s demarcation between reference and rip-off. There’s no shortage of Pokémon clones on iOS — games with half the elegance and none of the charm. Card City Nights is a game first and an imitation second.

And it’s not as though the game’s charm is wholly borrowed. 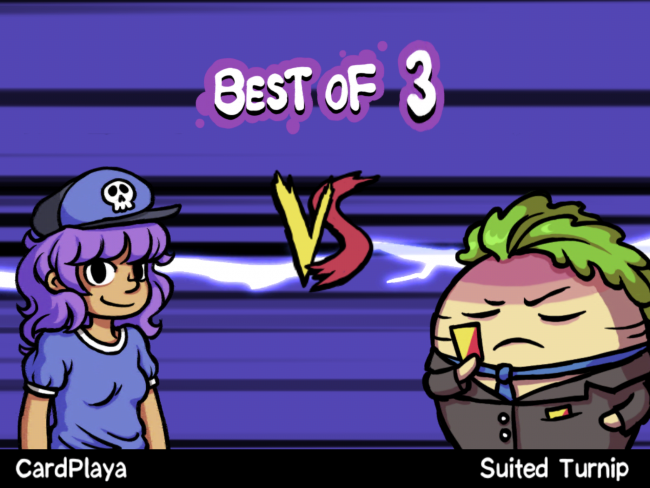 The bright fields and deep, green forests of the Kanto region are replaced with dark, clear city nights. Thick, bold outlines and a simple color palette mark each character design, which usually includes half-lidded eyes and laissez-faire attitudes. It’s like listening to jazz with your eyes -appropriate given the game’s soundtrack is, mostly, smooth jazz.

Unfortunately, it’s a world trapped in smoky amber. The characters beg to sway in lazy rhythm to the music, but fail to make any kind of motion at all. Instead, both they and the world they live in are deathly static.

Card City Nights is played entirely across a concrete map. You tap to select a venue, tap to select an opponent and tap to place your cards. That sense of exploration and adventure built into the core of Pokémon games is absent, and the familiar cycle of examine, collect, progress is poorer for it.

Card City Nights isn’t concerned with being unique; it knows it is. The way it plays shows some resemblance to other personalities, but the game wears it with reverence and confidence (even while it tries its best at irreverence). Its most original features are plastic and surface-level, but they hide a deeper personality that isn’t quite like what we’ve seen before.