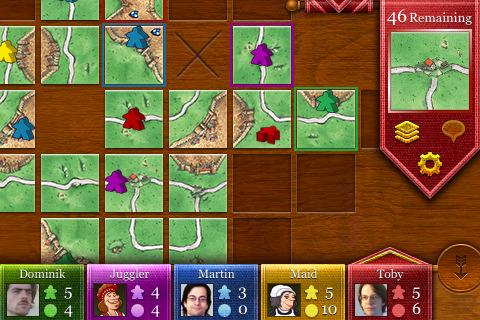 The single best board game experience in the App Store.

This isn’t the first time we’ve seen the supremely popular board game Carcassone hit a digital platform. The game saw release on Xbox Live back in 2007 and met with critical acclaim. Now the tile placing game is dipping it’s toe into digital waters a second time with the recent release on the iPhone. Personally, I really wanted this one to be good. Cue sigh of relief, because this game is better than good – it’s outstanding.

A typical game of is played between 2 and 6 players who take turns drawing tiles and building out the world of Carcassone. Tiles have cities, fields, and roads in various arrangements, and can only be laid down in places where their sides match up to the tiles you’re placing them against. So if your tile has a road running off the left side of it, then that side can only be placed against another tile with a road that matches.

In addition to placing the tiles, each player is afforded a certain number of “meeples” who represent their population and they determine scoring. After placing tiles you can place meeples on roads, in cities, etc to garner points for yourself. It takes a combination of skill at tile and meeple placement to walk away with a victory, for instance you need to make sure your city tiles are completely walled-in in order to maximize the points you’ll get for it.

You’ll have numerous options when setting up a game of Carcassone in dealing with who you’d like to play against. You can pick people from your address book or add them manually, and can play either over the web via push notifications or locally. You can play a quick match with a random person over the network which was easy to set up and moved quickly. But that’s not all.

There are also different AI opponents with varying degrees of difficulty to choose from. The AI opponents have attributes like “easy” or “hard” and even fun ones like “weird” and “mean.” In addition to all that here’s also a specially designed solitare mode if you don’t like playing against anyone else at all.

The solitare version is very interesting because you need to play the game very differently than when you play against opponents. You lay out the tiles yourself one at a time but need to build cities and roads in sequencially larger and larger sizes. So for instance you need to build a 2 tile road first, and after doing that then you need a 3 tile road, working up to 6. Same for cities. They also need to be done in order, so you can just build a 6 city tile and be done with it. You get points for how compact your city is at the end, inefficient tile placement will lose you points.

Carcassone as a board game occupies a certain place among what are known as “gateway games” in that they’re super easy with decent strategy under the hood to make it a low barrier of entry for new gamers to try out and get hooked by. This gateway status is easily apparent in the iPhone version, and makes an excellent way to get yourself into understanding this wonderful game. It’s such a perfect translation of the game that it’ll please seasoned veterans and new players in the same stroke. 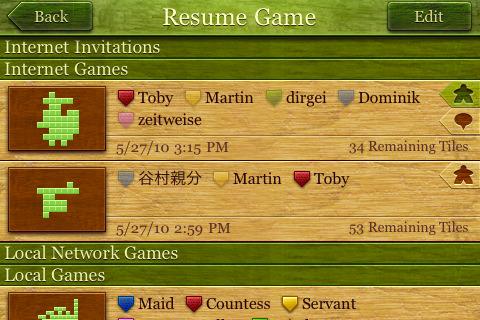 Carcassone may have the best tutorial I’ve ever seen in an iPhone game as well. Not only does it include a text manual of the rules, but also includes a full tutorial that you play through that includes a voice-over to explain what’s going on. If you’ve never played or are rusty on the rules of Carcassone, then this tutorial will get you up and running in no time.

It’s also worth noting that while Carcassone is currently an iPhone-only release, an iPad release is in the works. Rather than releasing as a separate app, the developers have promised that your iPhone purchase will be updated to include both versions. This means you’ll be getting two versions of the game for one low price.

All said and done there’s nothing I can find wrong with Carcassone, at all. It’s by far the best example I’ve seen yet of porting a board game to the iPhone, and is instantly engaging even if you’ve never played the real one. With the options for both local and network opponents, or AI and solitare games when you’re alone the game covers all the bases. I really hope they release some of the many Carcassone expansions. Five stars all the way.