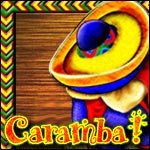 If you’re a fan of The Simpsons, you know Bart’s famous exclamations. "Don’t have a cow, man!" "Eat my shorts!" And, my favorite, a derivative of the oft-used Spanish interjection of surprise, "Aye Carumba!"

Okay. So, Bart’s not entirely correct. It’s actually spelled "Â¡Ay, caramba!" No matter, Zylom has the mariachi band warmed up and ready to hit the streets with their unique puzzler, Caramba.

A physics-based, south-of-the-border-themed title, Caramba is played, predictably, with Caramba Balls and offers a unique mix of elements – think billiards and match-three. You begin in Adventure Mode, traversing Mexico a region at a time. Complete one and more are unlocked. Successfully finish several and the next mode, Practice, opens up, followed in turn by Challenge and Salsa. Practice allows you to replay levels already completed, while Challenge caters to more experienced gamers, and Salsa lets you play levels randomly (over 100 in all).

How’s it work? Simple. Start a new level and a selection of balls appears. Then, with your mouse, fire a shooter ball from one of the play field’s edges at balls of the same color on the field. On impact, they’ll "light up." Light up three or more with a single shot and they’ll vanish. Remove all balls from play before time runs out and you’ll advance to the next level. That’s it. Scoring is based on total points collected, the time required to clear a level and the number of balls employed.

While play couldn’t be much simpler in theory, Caramba requires a great deal of skill to master. Simply blasting away won’t work. As with billiards, angles and lay are key elements. Err in the angle you select or fail to plan where the balls will lie after a shot, and your score suffers. Moreover, shot power needs to be regulated (by holding down the mouse button) to achieve the best tally and you really must think several shots ahead. This becomes more critical as you advance through the game’s increasingly difficult levels.

Of course, there’s more to consider than that. As you bank and careen your way through the game, added elements spice up play. Bonus items, which pop up at random, include Two-colored Balls, Joker Balls, Caramba Coins and Chillies. Two-colored Balls light up balls of both colors and Joker Balls light up those of any color. Caramba Coins let you "purchase" a second try at a level you failed to complete, while Bonus Chillies have varying effects. A Red Chilli doubles points received, Green Chillies extend the aiming line used to set up your shots and a Yellow Chilli stops the clock for 25 seconds.

Challenges take the form of Screwed-down Balls which are fixed in place, Black Balls and White Balls considered colorless and incapable of being removed (though White Balls can be given a color and then cleared), as well as irregular shaped levels, balls requiring multiple matches to clear and metal walls that limit your shot locations.

So, what’s it actually like to play? Well, as indicated, Caramba is very similar to billiards. Yet, unlike pool there’s no cue stick and the shape of the playfield continually changes. Nonetheless, those familiar with billiards will be most at home with the game. Early levels are quite simple to play, but later levels will require more and more "trick shots" to complete.

And here’s where the purchase decision comes into play. Caramba is a more exacting game than most casual fare. It requires precision to succeed, especially later in the game. Hence, its appeal is a bit more limited. It looks and sounds great, has a simple yet solid play concept and offers oodles of Mexican "flavored" fun. But, if you don’t have the skill and patience required for billiards, you probably won’t stick with Caramba. In addition, play wears a little thin early in the game and it really cries out for a two-player mode.

As enjoyable as this game is, it should come as no surprise that Caramba will not appeal to everyone. Most games don’t. Though, in this case it seems more apparent. If you’re not frustrated by games of precision, by all means give it a shot. Otherwise, in the words of young Bart, you might be crying out "Aye, Carumba!" for the wrong reason.