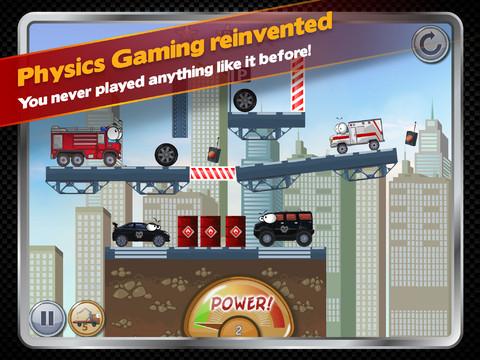 Bringing your childhood heroes to the next level of awesome

When asked about what profession people trust the most often, firemen, medical professionals, and police officers almost always find themselves at the top of the list. Good people are great for a healthy society, but what about when trouble is beyond the law? Where are the rogue paramedics, taking the law into their own hands? In FDG’s Car Toons!, that’s where.

Based on an older browser title, Car Toons! puts you in control of an 80’s-style A-Team of service vehicles, including a fire truck, ambulance, and police car. When the streets are littered with troublemakers, it’s up to this power squad to come out of retirements and clean up their act.

Each of the game’s 100+ stages are complex in set-up, but simple in execution. It’s your goal to push the evil black cars off each stage using whatever means necessary. While these are certainly rogue vigilantes, they aren’t on a suicide mission, and it’s up to you to keep the team in one piece as well.

Movement is extremely simple – one tap starts a vehicle, while another tap slams on the brakes. Ideally, you’ll be ramming your full-speed car into an enemy, followed by a quick stop to prevent you from meeting your opponent’s fate. While most stages are fairly straightforward, later events introduce layered terrain, explosions, physics puzzles, multiple cars, and abilities.

Each car has a unique ability that allows it to conquer abnormal situations, such as the police car’s U-turn, the fire engine’s rocket boost, and the ambulance’s power jump. These abilities lead to some extremely complex scenarios, such as leapfrogging on top of an ally car for a dual attack, or performing a U turn in order to avoid a chain reaction of TNT.

The only frustrating thing about these abilities is their control implementation. Powers can be activated by tapping the power button followed by tapping on a vehicle of your choice, or by double-tapping the car you want to activate. In earlier stages, either option is acceptable, but in the later ones it’s almost mandatory that you employ the double tap method with its increased speed. On the iPhone, it can get pretty tough to focus two fingers on one tiny car – especially if you have bigger hands.

If there’s anything that Car Toons! provides, it’s variety. Most stages provide an entirely unique concept, such as launching an enemy car in order to blast them with a horizontal block baseball-style, jumping into a windmill in order to backflip into a bomb reaction, or any other ridiculous action-packed scenarios. It’s eye candy that’s extremely reminiscent of Amazing Alex. 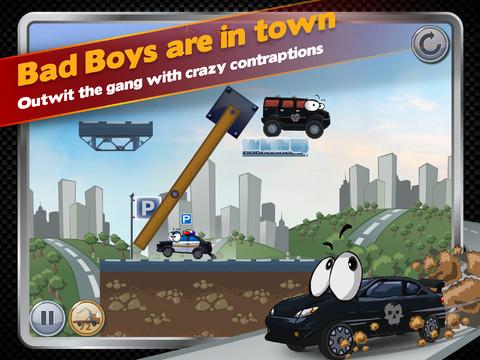 Unfortunately, Car Toons! shares the biggest shortcoming of the previously mentioned title – too often it’s too easy. The chain reactions are fun to watch, but they’re all over too quickly. It was only around half an hour tops before I realized I was halfway through my 100 stages, and it only took a few more casual sittings to complete the rest. It was a great game while it lasted, I just wish that it lasted a little longer.

If you’re a fan of physics puzzle titles and want to bolster your library with something action-packed, Car Toons! is an excellent choice. It might not have the best replay value in the world, but this car-based adventure is definitely worth a spin.