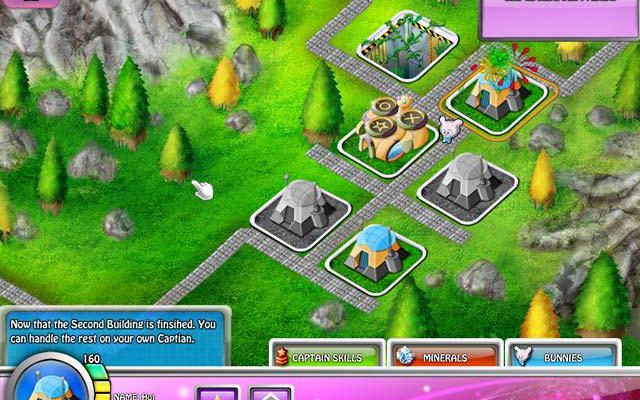 Vast Studio’s Captain Space Bunny is a space-themed city builder with some neat ideas. Problem is, those ideas are buried under a heap of problems so deep that few players are likely to burrow through and find them.

The first issue you’ll notice is the quality of the game’s writing, or rather the lack of quality. Missing words and awkward structure render many sentences almost unintelligible, and misspellings are rampant. Reading through the tutorials and subsequent narrative text (which, should you care to know, is about a female bunny travelling from planet to planet and helping local governments with development problems while looking for clues that will lead her to her home world) is more hassle than it’s worth.

The next problem you’ll encounter is a thoroughly uninspired and unintuitive graphical user interface. I had difficulty keeping the locations of important menu items straight in my mind, and poor visual aids didn’t help matters. For example, the pictogram designating the vague category of “support” structures—recycling centers, research labs, and security centers (oops, I mean “secruity” centers)—is, bewilderingly, a file folder. 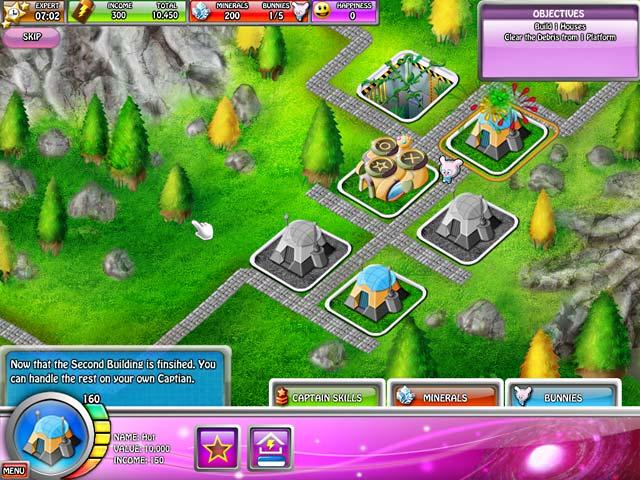 And I rarely had a firm grasp of where my industrious little bunny workers were, what they were up to, or when they’d be ready to take on a new task. Send a group to build a new structure or staff a festival and they disappear for long stretches, making it easy to forget where they are and how long until they’ll be available again. Compounding matters, when they eventually did reappear I was unable to reassign them to a new task until they made their way back to base. I watched, frustrated, as they passed by work that needed to be done along their way home, eating up precious seconds in the process.

Making it even more difficult to get into the swing of things are lackluster graphics and a bland and repetitive score. The buildings and characters are wholly lacking in personality, the cartoon cells used to tell the story are so simple they look like storyboards rather than a finished product, and plain, repetitive music quickly moves beyond dull and into the realm of grating. Thankfully, we’re given the option of switching the music off and leaving the sound effects—which offer important non-visual cues for many of the game’s events—on.

However, if you can get past these many major problems and locate the game that lies beneath, you’ll find a city builder with some neat ideas and intriguing mechanics.

It copies the design of many other city building sims in that each mission typically unlocks a new structure type or ability that gets added to existing stocks of structures and abilities and remains available for the rest of the game. Fans of the genre will also find familiar the concepts of upgrading properties to increase rent, creating amenities that improve the population’s happiness within a limited radius, and finishing within a set time in order to earn an achievement (a gold star, in this case). Though well worn, these facets of the game have been nicely implemented and offer a good, fair, and—dare I say—entertaining challenge. 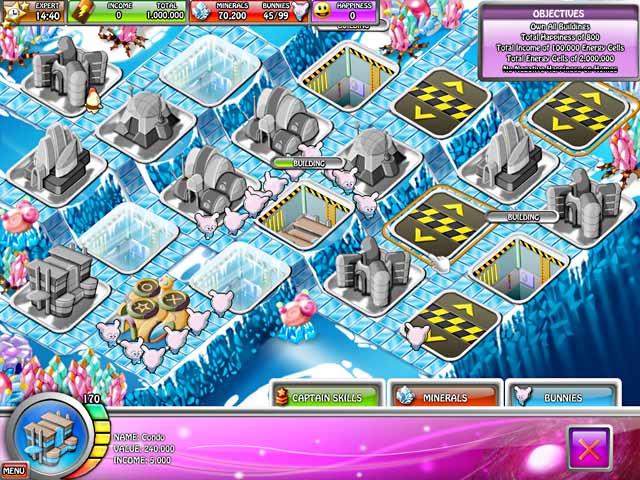 There are also some pleasant features that are a bit less common. For instance, not all lots and properties are yours to do with as you will. You’ll need to wait for the owner to put them up for sale and then decide whether you’re willing to just buy them outright for the asking price or put in a lower bid, which will extend the sales process and could be rejected, forcing you to wait for the property to go up for sale again.

Plus, we can use the food, gifts, and energy boxes we collect around town and store at our base to either boost citizens’ happiness or consume them for a one-time increase to our resources or captain’s skill meter. It adds a subtle layer of strategy.

On the subject of our captain’s skills, she gains some very useful abilities over the course of the game, whether it’s forcing a house to go up for sale, making her bunny workers really hustle their furry little butts for a minute or so, or slowing down the crab-like pests that wander into town and cause havoc. Her skills are practical, powerful, and satisfying.

Sadly, these modest but promising bits of innovation make Captain Space Bunny‘s failings all the more regrettable. With a little more attention to detail, some extra time spent in the art department, and a proofreader, this game could have been an excellent entry in the city building genre instead of the flawed, middling effort that it is.