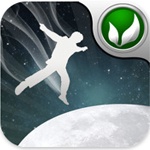 Here he comes to save the day! He leaps from planet to planet in a single bound, saving them by merely touching them! He asks for no reward, claims no bounty for helping out. Who am I talking about? Why, Captain Ludwig of course! He never gets a backstory so who knows why he’s planet hopping like this but maybe Captain Ludwig is just a dude out to have a good time, and in that case he’s quite the successful hero.

The game at it’s core is quite simple. The good captain stands on a planet, spinning around it. Tapping the screen makes him take flight, jumping out into space. The plan is to jump to another planet in range. Captain Ludwig is all about timing and tapping the screen at the exact right time to make a safe jump, bouncing around the planetary system until he’s touched them all.

This singular purpose (and button input) reminded me instantly of Canabalt. The main difference here is that in Canabalt you never stop, jumping like mad just to keep up. Here, once safely on a planet you can ride it around for a bit to determine your next best course of action. These measured decisions make for a different but still compelling gameplay experience.

Ludwig flings himself around 21 different levels, each a different planet system and most including a unique blend of obstacles. For example some have radioactive planets that you can only stay on for a few seconds at a time, others have floating mines that need to be avoided while jumping. As levels progress you’ll get a mix of a bunch of things trying to kill you. Sometimes you even jump into a spaceship to reach some WAY out there planets. The variety means you can’t just use the same strategy over and over for each round.

Since you’re jumping around in space though there’s more to worry about than just the obstacles the game throws at you. Space itself is a problem to be conquered. You can jump to any planet you wish so long as you can see it on-screen the second you jump. If it’s off-screen, you die. If you over or undershoot the target planet, you tumble off into space and lose a life.

Luckily the game does give you some help here and there. Extra lives sometimes float out in the ether, or bubbles to protect you can be snagged during jumps. These assists are few and far between though so while they’re always welcome you can never rely on them. Careful timing and planning is the only way to survive.

The obstacles and difficulty ramp up nicely and it’s far from a walk in the park anyway. It gets hard, but it’s never unfair which is a hard line to straddle but Captain Ludwig does a great job of it. The minimalist retro feel works great with the muted color palate which all blends with the gameplay. All the elements just fit together very nicely.

My main problem with Captain Ludwig is the lack of desire to replay any of the levels. There are OpenFeint leaderboards and achievements so there’s certainly a reason to replay them, but I found myself without that “I need to beat the score” feeling that I get some other highscore driven games. I was satisfied beating the level and content to leave it at that.

While I don’t think I’ll get much replayability out of Captain Ludwig, I certainly feel I got my value out of the included levels. It’s a challenging game that when beaten leaves the player with a good feeling of accomplishment and I personally hope they expand the game down the line with even more planet hopping goodness.