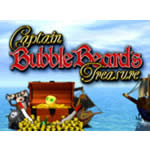 Ahoy, Matey! Swab the deck, raise the mizzenmast and hoist anchor! It’s time to set sail for adventure! There’s treasure to be had, by jiminy, and it’s ours for the taking! Pirates or not. All we’ve got to do is find it!

Fortunately, that’s no problem in the light-hearted Captain BubbleBeard’s Treasure. Neither is a lack of "monkey business" thanks to an apish sidekick named Chimpy.

What can you expect in this high-seas, island-hopping, timber-shivering tale? A boatload of puzzling, color-matching, bubble-bursting fun. It all revolves around the legend of Captain BubbleBeard’s treasure and the terrible secret behind it. Where’s the treasure? What happened to the good Captain? And, what’s up with the bananas? All good questions that only time and success will reveal.

In Adventure Mode, Captain BubbleBeard’s Treasure spans five islands providing a total of 58 levels with 76 Puzzle and 39 Strategy stages (three to five per level). Its five varied game types — Action, Puzzle, Strategy, Survival and Battle — offer distinct challenges, too. Action charges you with popping a set number of bubbles in a given time. Puzzle requires you to clear levels quickly. Strategy provides limited ammunition and only one or two ways to clear a level. Survival entails withstanding a timed onslaught of bubbles that constantly scroll down the screen. And, Battle pits you against an opponent that must be defeated over the course of one, three or five rounds (usually three).

Arcade Mode is played outside the confines of the back story with each game type unlocked once you’ve finished a couple levels in Adventure Mode. Play features continuous levels that increase in difficulty as you go.

At its most basic level, gameplay is familiar to anyone who’s played one of the many match-three, bubble-bursting games already available such as Bubble Shooter, Bust-a-Move, Inca Quest and Dynomite. Your goal is simple — shoot a bubble from your cannon at the bottom of the screen into a field of bubbles descending from above, matching its color with that of at least two other bubbles. When you do, they burst. Right-clicking the mouse swaps the current bubble for the next one in the queue. Understand these two elements and you’ve got the gist of play.

Of course, there’s more. While popping individual bubbles adds gold used for buying power-ups, dropping groups of bubbles increases your point score more rapidly. Albeit, with less gold and fewer trophies. Shortcuts let you speed through the game more quickly, if you wish, again with similar penalties. Plus, shops that offer power-ups are provided on each island. Run by Chimpy, they feature one-use goodies like Aiming Lines that temporarily show exactly where your bubbles will land, Time Stoppers to keep new bubbles from appearing for 20 seconds and Bubble Mines to blow up surrounding bubbles.

You can also buy passive power-ups that provide a constant bonus. These include the Bucket o’ Bombs, increasing your chance of getting color bombs and mines, and the Money Multiplier, doubling the gold you win.

In addition to power-ups, Special Bubbles and Trophies also come into play, literally. You’ll come across Rainbow Bubbles, Bubble Mines, Color Bombs and Skull Bubbles. Respectively, they assume the color of the bubble contacted, blow up neighboring bubbles when hit, explode when contacting two or more bubbles of the same color and must be dropped rather than popped. Barrels, fixed obstacles that can’t be removed, also appear. Trophies acquired, twenty in all, include items such as Island Trophies, for completing each island; Inflatables, purchased in island shops; and Flawless Victory, for beating a pirate 2-0 in battle.

For the most part, everything’s shipshape in Captain BubbleBeard’s Treasure. Graphics are colorful and attractive, music and sound effects complement the theme, and play is addictive. Best of all, you can tweak the game to match your skill level or disposition. Too easy? Ramp up the difficulty. Four settings — Normal, Tricky, Fiendish and Insane — adjust the challenge. Just want to shoot bubbles? Play Arcade Mode. Looking for some brain-teasing pleasure? Choose Puzzle or Strategy.

On the downside, nothing is really worthy of being hung from the yardarm. On occasion, banter accompanying the built-in tutorials is a bit annoying. But, it’s not a major issue. More bothersome is the lack of in-game pop-up descriptions for power-ups (only available in shops). So, if you forget what they do, tough bananas. Arrgh!

Nonetheless, Captain BubbleBeard’s Treasure offers, as claimed, "a fortune in family fun." It’s a generational game designed to please everyone from junior to grandma. There’s bounty on this voyage, Matey, and a whole lot o’ bubbly fun in store for all — landlubber or not!