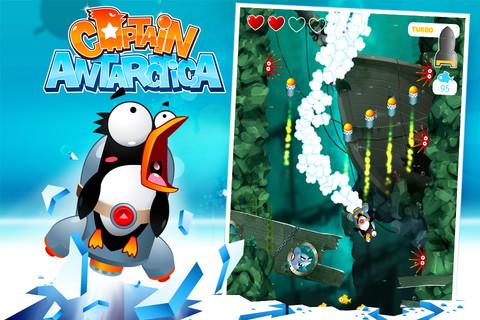 Captain of the S.S. Cute

Captain Antarctica is not your average hero. In fact, I’m not entirely sure what he’s a captain of. Regardless, he’s a penguin on a mission. His friends have been kidnapped and, jetpack in tow, he must set out and rescue them one by one.

In what I imagine is a little unusual for penguins, he must fly downward through a series of levels, dodging enemies and obstacles and gobbling up fish. Okay, so that second part isn’t all that uncommon of penguins, but I’m pretty sure the part about rapidly descending by aid of jetpack is. And last I checked, they don’t go up against heavily armed bosses – unless you count seals.

I’m willing to let that misinformation slide, as it functions as the means to an enjoyable end. There are definite comparisons to be made to other games here, but where Captain Antarctica fails to branch out in terms of gameplay, it manages to diversify in how it delivers that gameplay. Rather than ascend downward for as long as you possibly can, the game breaks things up into bite-sized levels, each of which contain a unique set of goals.

And besides, borrowing an idea or two from other games isn’t always a deplorable act – if it ain’t broke, why fix it? In the case of Captain Antarctica, it takes a page from other ascension/descension games by allowing you to move the character via tilt controls or moving your finger around the screen. There’s a definite tradeoff here – the tilt controls are a little less precise, and touching the screen ensures that some of the action will be obscured from your view. I found myself preferring the touch controls, but both work just fine.

Assuming the game is functioning correctly, that is. I encountered some framerate issues while playing on my iPhone 4, and they led to me crashing into an obstacle without any chance of saving myself. I was hoping it would happen once and go away, but it seemed to happen about once in every three rounds. It didn’t last the entire time – or longer than a few seconds, even – but it was enough time to wreak some damage.

Despite this issue, I still found myself pleased with most of what the game has to offer. The level of customization, for example, inspired the completionist in me to play more in one sitting than I probably should have. There are several different jets available to purchase with coins earned from playing, none of which I’d call particularly normal. Take the Fruit Jet, for example. It’s a large watermelon with two smaller watermelon halves strapped to the bottom. Because why not?

You can also increase the life of the eponymous Captain Antarctica by purchasing additional hearts, as well as improve the potency of power-ups you encounter mid-game. Some of these items were pretty expensive, but not to the point where I felt it vital to pour real money into the game to get them. Playing well will quickly net you a considerable amount of coinage, so my pro-tip to you is to not be terrible. I know it sounds counterintuitive, but it really helps.

Captain Antarctica is not the most original game, but it presents the content in a way that makes it feel fresh. With specific start and stop points in place, it makes it easier to pick up and play for brief periods. There’s nothing worse than performing really well in a marathon game, only to realize it’s time for you to get off the bus or attend to something else. I realize that may not be enough to excite people burned out on the genre, but for the rest of us, Captain Antarctica is a great way to kill a few minutes now and then.