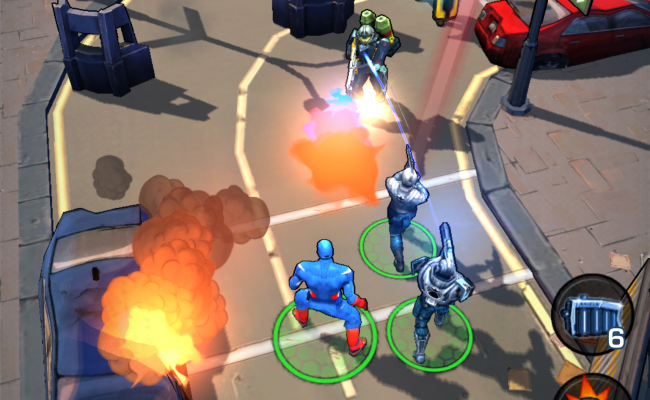 A shield throw in the right direction, but not quite on target

If hope springs eternal, then very few places see it sprout as often as in the garden of mobile games based on super hero movies. Gameloft is trying again with Captain America: The Winter Soldier, learning something from its past missteps but still not hitting the mark with something that’s as awesome as it seems it could be.

As the movie by the same name hasn’t been released in the U.S. yet (lucky overseas audiences!), there’s no way for me to tell you if the game contains spoilers. What I can relay is that New York is under attack by multiple criminal conglomerates with acronyms for names, and Cap has to lead S.H.I.E.L.D. agents into the fray to set things right. Presumably, the Winter Soldier is also involved at some point. 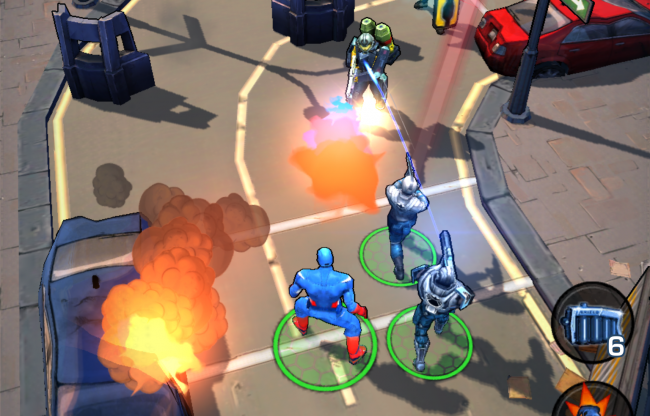 It’s easy enough to put Steve Rogers’ legendary skills into action, tapping on enemies to attack them hand-to-hand or swiping to target them with a thrown shield. Just like in the comics, Captain America can make some nifty tosses that ricochet off surfaces and hit multiple targets. There’s an option to use a virtual thumbstick and attack button instead, but only masochists would want to do that.

Depending on which outfit your Cap is sporting – there are quite a few cool ones to unlock – you have a special attack at your fingertips as well. It’s still not enough, as this game suffers from one of the problems that hamstrung the developer’s Thor: The Dark World tie-in title: the hero looks the part but just doesn’t feel heroic enough. He’s one of the Marvel universe’s premier melee fighters, but that doesn’t come through here.

The S.H.I.E.L.D. agents are smarter than the Asgardians who helped Thor in that game, and they have special abilities depending on their class that are genuinely useful and easy to use. They’ll auto-attack if you don’t give them anything specific to do, though it’s sometimes difficult to tell how close they are to getting KOed.

Movie versions of Black Widow and Falcon can also be summoned with special Avengers tokens, but all they do is rush through and eliminate some enemies on their way to … the movie premiere, maybe? Rescuing our princess in another castle? And the game doesn’t even give you something as memorable as “Thank you Wonder Man!” while they do their thing.

Each mission has three possible stars you can earn, often by intentionally handicapping yourself in some way (not bringing a full squad, not using any consumables). Both Cap and the agents can be upgraded between battles by spending credits or synthesizing different blends of ISO-8, the mystery substance that flows through and binds all Marvel mobile games together like a crystalline version of the Force.

Even if you enjoy the action, the story and the admittedly pretty visuals (one iOS reviewer compared the look to a super hero version of Borderlands), there are a couple of other gremlins lurking within. The first is that you have to pay to play, but the game still asks if you’d like to purchase credits or premium currency. Mobile developers, please pick one or the other. 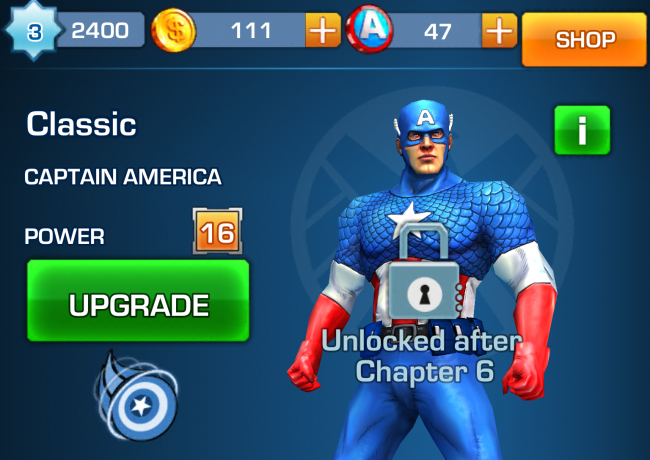 I was also dumbfounded that Captain America: The Winter Soldier needed an active internet connection to play. It’s not clear exactly why, as many more robust mobile games don’t need one, and it’s not like you’re playing live with other players or anything. This would be the perfect game to play in short doses while, say, standing in line for movie tickets, but you won’t necessarily be able to use it that way.

A loyal reader told me I overrated Thor: The Dark World, and while this game is better, it’s not by much. That leaves me in much the same place, lamenting that while this game looks like the proper companion experience to the sure-to-be-awesome movie, it’s just a bit underwhelming. Guess I’ll keep hoping.