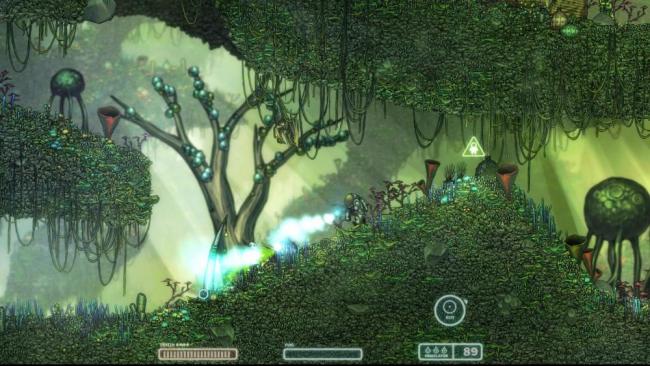 Why is that aliens are always depicted as these nasty, dangerous beings that will instantly lunge at any human life they catch sight of? Surely your first thought when crash-landing on an alien planet should be to worry about how you’re going to get back home, rather than what beasties you need to watch out for.

Of course, the simple answer is that, if when meeting an alien race they proceeded to shake us by the hand and offer a selection of assorted cookies and refreshments, that wouldn’t make for very good viewing, or indeed, playing. Thank heavens Capsized does nothing of the sort, or else we may have potentially missed out on the gorgeously hectic gameplay and very real sense of dread this game provides.

You are part of the crew on a spaceship that is hit by an unknown force, and sent rocketing towards the nearest planet. Each crewmember deploys an escape pod, and burns through the atmosphere before landing in a dense and dark environment full of nasty creatures and plenty of obstacles to overcome. With your gun in hand, you are tasked with finding your crewmates and escaping the planet.

Capsized is a physics-based platformer that mixed firefights with puzzle solving and exploration. While the main crux of the action is focused heavily on keeping the various alien creatures back, there’s lots to see and do, and the gameplay barely ever settles into one role, throwing multiple objectives and ideas your way.

You’ve got a laser hook that can be used for a number of different effects. Fire at the ceiling, and you can use it to swing over deadly gaps, or pull yourself up steep inclines. It can also be used for pulling and pushing obstacles around, opening up paths and even using smaller rocks at ammunition against tougher enemies.

If a ledge is just too far out of reach, activate your jetpack and you can launch yourself anywhere in the level, provided you’ve got enough fuel left. Using your jetpack during a fight can make the action feel even more exciting, as you swoop around dodging enemy fire and shooting your own bullets in their direction. 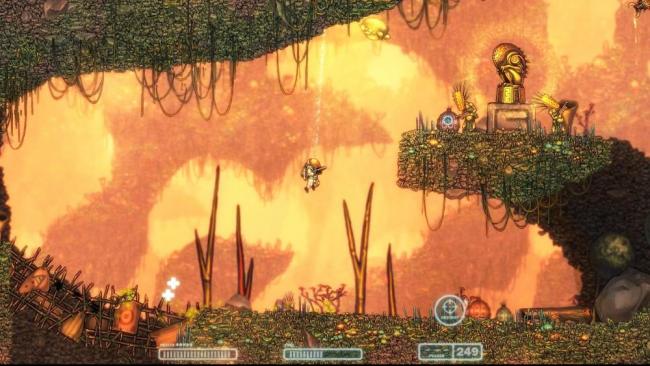 What makes Capsized so wonderfully playable is the open feel to it. Levels are never linear, and feature multiple routes you can take and secret areas to explore. There’s loads of variety to the missions too – one level you’ll be blasting your way through the hordes to the reach the exit, while the next you’ll be collecting your crew-mates together and leading them to safety.

As if the meaty campaign wasn’t enough, there are lots of extra multiplayer modes to jump into, fighting AI bots in specially designed arenas and going head-to-head with a friend to see who would survive an alien planet the best.

It would be wrong to talk about Capsized‘s plus points without mentioning those stunning visuals. The dreary, dark setting really captures the gloom of the planet well, and makes progression feel so tense. There are lots of little attentions to detail here and there that make it such a lovely experience too – for example, as you’re coming close to death, cracks begin to appear on the screen as if you’re looking through the helmet of your hero.

While Capsized is great fun, it may prove a little difficult for some players. On the later levels, the enemies really start to build up, and you’ll sometimes find yourself surrounding by up to a dozen baddies who will obliterate you in a matter of seconds. If you’re not very experienced with side-scrolling shooters, prepare to feel a little frustrated later on.

There’s also a lack of online features. Although the game is Steam-integrated, there are no online leader boards, or online play at all – which is odd, considering you can play local co-op and there are high scores all over the place. A missed opportunity that will hopefully be rectified in a future patch.

Capsized is a gorgeously atmosphere tale of survival in a seemingly hopeless situation that will enthral from start to finish. If this isn’t the type of game you normally play, you should at least give the demo a download and see if the fast pace and intense action capture your attention.