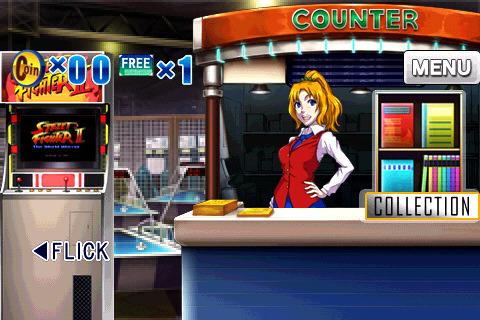 Repurposing arcade classics on new devices is pretty much old hat for publishers who’ve survived since the coin-op era. I’ve bought Pac-Man on nearly every device known to man. If I could, I’d play Frogger on my toaster. Now Capcom has bundled some of their best-loved classics together in a tidy little iPhone package, and they’ve managed to bring something fairly new and downright enlightened to the table.

Collecting four arcade classics – Street Fighter II, Ghouls’n’Ghosts, 1942 and Commando – with the promise of more to come, Capcom Arcade offers a brilliantly unique spin on freemium pricing. Rather than charging for the collection, players will be given three free plays a day that they can use however they see fit. If they want more, they’ll be able to buy tokens and pump them into the machine, just like in the arcades.

Token prices are totally reasonable – don’t expect to be shelling out a whole quarter like you did back in the olden days. Players can purchase 10 tokens for 99 cents, or, if they find there’s one machine that really tickles their fancy, they can purchase it for $2.99 thereby unlocking permanent free play status.

In addition to the “pay to play” model, players can also purchase cheats for each of the games. For 99 cents, players can unlock a variety of helpful “special items” that will give them a leg up, like a plane that starts with full shooting power in 1942, or the promise that treasure chests will always have armor in Ghouls’n’Ghosts.

It feels strange talking so much about the finances of a game in a review – even when that game is freemium – but Capcom’s approach here is so unique that it’s really what makes the bulk of this offering so special. Avid gamers may recognize similarities to Microsoft’s Game Room service for the Xbox 360 and Windows PC’s, and the comparison is mostly apt. The difference, however, is that while nickel and diming gamers on consoles is an uphill battle, freemium pricing structures have been welcomed with open arms on the iPhone.

But what good is a neat pricing structure if it doesn’t have the gameplay to match? Thankfully Capcom Arcade manages to pull off some perfectly faithful ports of these arcade classics. The on screen controls work well – even in more demanding games like Street Fighter II. And the visuals and sounds are spot on too. 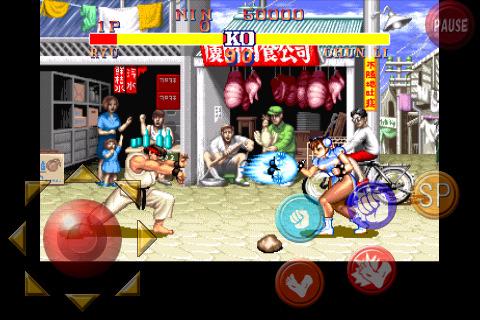 The only major complaint we had was with the screen size. Rather than offering transparent controls over the pre-existing graphics, the default setting shrinks each game into a smaller window, allowing for the controls to appear below on a solid black background. We would have much rather lost a little of the original presentation to cropping so that these games could take advantage of the iPhone’s full display. While the option to toggle full screen on and off is there for some games, it’s not an across the board offering.

We had some minor complaints too, but honestly, we’re being nitpicky. We didn’t like the addition of a “special power” button to Street Fighter II, as it somewhat nerfed the experience. We would also have liked to see a few more games at launch, or possibly some demos/marketing for the modern reimaginings of these titles that already exist in the App Store, like 1942: First Strike, Ghosts’n’Goblins: Gold Knights II, and Street Fighter IV.

Still, beggars can’t be choosers. As far as freemium offerings goes, it’s hard to say no to a free round of Street Fighter II every morning. An ingenious new pricing technique combined with some quality old school ports makes Capcom Arcade a no-brainer for anyone with a fondness for the arcades of yesteryear. And with the promise of more games to come, this is one you’ll want to be keeping an eye on.