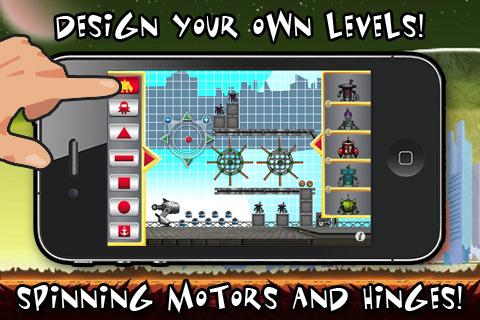 A Step in the Right Direction

A new update for Cannon Cadets makes a passable experience into a good – if not great – pocket game.

The graphics and sounds are both greatly improved. The levels are much more colorful, with different environments. The obstacles are now made of multiple materials, making it easier to see and target. The game has a much higher degree of polish.

Cannon Cadets adds a ton in the replay value department by adding scoring to the game. After each level, you are given a rank based on your ability to complete the level with the fewest cadets, as well as the most destruction.

Navigation-wise, the bonus levels are easier to find in the main menu, as well as now having a quick option to mute the sound. (There is apparently a way to play my own tunes in-game, but despite multiple attempts, I couldn’t figure out how.)

Finally, the latest version of Cannon Cadets offers a robust level builder. It has a steep learning curve, but has very detailed instructions as well as an online tutorial that really helps. Users can share their levels, and you can download and rank other creations.

While still not in the same league as the venerable Angry Birds, version 2.1 of Cannon Cadets has improved most of the flaws from the initial release, offering a fine improvement over the original product.

It’s not surprising that with the success of Angry Birds, companies are vying to be the next Misanthropic Macaws. Cannon Cadets sure tries its hardest to do so, but does it knock the first-place fowls off their perch? Not quite.

Cannon Cadets tells the story of Gordo the monkey. Used for various space-faring experiments, Gordo was eventually forgotten and abandoned on a planet. Gordo didn’t take kindly to this, and vowed his revenge to rob the universe of all its fun. But one fun-loving RocketBoy, with a jetpack fueled by fun, is out to stop Gordo and his nefarious robot army.

While playing Cannon Cadets, it’s almost impossible to not compare it to Angry Birds, since Cannon Cadets seems to borrow a lot of the pages from the birds’ playbook. 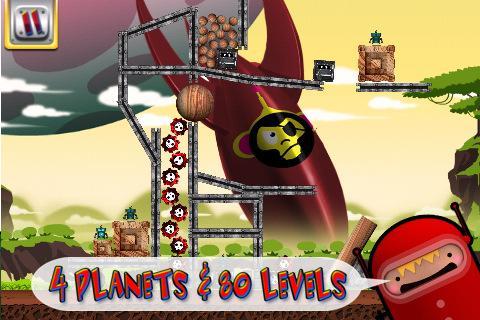 Progressing through Cannon Cadets‘ 80 levels (plus some hidden ones, which are unlocked by shooting down UFOs in some levels) is done just like Angry Birds. Launch the various cadets from their cannon to destroy obstacles and, ultimately, Gordo’s robot army. You have a finite number of cadets to launch, and multiple cadet types to solve each level. It all starts to feel a little too familiar despite the attempts Cannon Cadets makes to be funny and different.

One improvement over Angry Birds is a clear percentage number over the cannon as you drag your finger back to fire. It really helps improve a player’s accuracy when solving some the game’s very clever puzzles. Some stages require pinpoint accuracy, and being able to track exactly how much power your previous attempt used is a welcome feature. The puzzles themselves range from simple demolition to complex machines. Some levels require you to set something in motion – say, a large metal ball – that sets off a series of traps or explosions that gleefully annihilate the entire level you were playing.

The physics that power Cannon Cadets are probably the best thing the game has going for it. Everything reacts to whatever touches it, and explosions are wonderfully enormous. Watching a series of machines cascading into each other, especially in the later levels, is really a joy to behold at times.

Sadly, there is no incentive to complete a level using fewer cadets, as there is no scoring system or achievements. Once a level is completed, there is no reason to return. Unlocking the game’s levels can be done the traditional way, or purchased by tapping a locked planet, which brings up a prompt to buy your progress. Not everyone will agree with this method, but at least the option is there for players who simply get stuck. 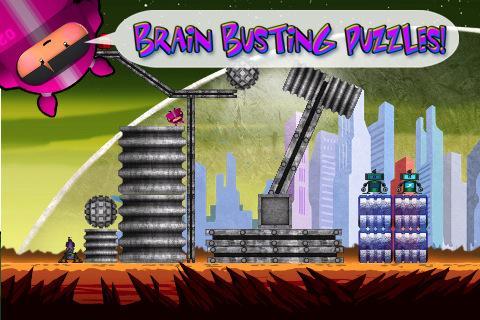 The graphics are angular and colorful, and try to be as silly as possible. But because everything is a robot or robot-built structure, the game foregrounds are overwhelmingly gray. Missing here is all the organic texture of Angry Birds, like grass or ice. It all seems a little bit cardboard cut-out. There is also some serious slow down when lots of things are moving onscreen. But overall, the graphics are more than serviceable.

The sound is another story. This has to be the worst sound on any iPhone game to date, including games where sound is completely absent. The 8-bit title song is the only sound you’ll hear. After that, it’s stone-cold silence with occasional burps, farts and unfunny battle cries from the cadets as they launch. Unlike the cute, laugh-out-loud birds, these battle cries are low-quality chipmunk phrases like “Oh Boy!” or “Oopsie Daisies!” There is not way to disable the sound effects, and no way to play your own music to fill the sonic vacuum.

There is a decent foundation here, similar to how Angry Birds started life as a product much smaller than it is today. But Cannon Cadets does more than pay homage to it. With nearly identical gameplay, nearly identical characters and minus the goofy charm, Cannon Cadets falls short of its lofty ambitions. This is one to watch to see what updates can do for it. But right now, it aims to dethrone Angry Birds, and sadly misses the mark.