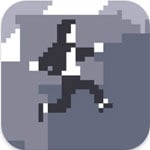 Since its debut as a free browser game earlier this year, Canabalt has been the darling of the indie games industry. But despite all the praise it receives about art style and music, it's simplicity, it's elegance — it's all too easy to strip away the layers of polish that frame Canabalt and sum the whole experience up with one little word: run.

In Canabalt you control a person who is running – from what we don't know. Judging by the scenery and some of the obstacles you encounter, some might say it's the end of the world. Others might argue an alien invasion. Maybe it's neither, maybe it's both. Whatever it is they're running from, they aren't slowing down for anything.

You're not in control of the person so much as you're in control of their ability to jump. The runner is running from rooftop to rooftop, and you'll need to tap the screen to time their jumps so that they land safely. Outside of jumping, the only thing you have any real control over is speed. If the runner bumps into certain objects – office chairs, boxes, etc.. – it will slow his speed a tad. The more he runs into, the slower he goes. The trick is in knowing the speed you'll need to be at to tackle the unseen environment ahead. Go too fast and you'll overshoot a small roof. Go too fast and you'll never make the jump.

To safely navigate the environment you'll also need to know about a few obstacles. Some buildings crumble to the ground as soon as you land on them. Others you'll need to jump “through” by crashing through a window. Every now and then you'll even need hurdle over bombs that have crashed out of the sky.

The game is about balancing maddening speed with quick reflexes, and seems to have been designed to be played in short bursts that complement its frantic nature. A session of Canabalt can last anywhere from 15 seconds to a little over a minute (though we assume a champion Canabalt player can last much longer), meaning that you're never going to have to commit more than a few idle moments to getting a game fired up. In fact, the quick load and play times make this the perfect game for killing the occasional idle minute here and there. If I'm waiting a couple of minutes to get my gas tank filled at a full service station or if my wife hops out of the car to go buy stamps, I can quickly fire up Canabalt and get through a few games before moving on with my day. If you're anything like me you'll find yourself going to addictive little gem a dozen or so times a day.

What makes Canabalt so addictive is the same thing that kept us hooked on arcade games back in the early 1980's; the high score. Unlike most modern games that try to foster competition amongst friends through a social scoring system, Canabalt only sees you challenging yourself. Scoring in Canabalt is all about distance – in fact, your points total is measured in meters. The further you make it before failing, the higher your score. Knowing how far you've made it in the past keeps the fires burning in that competition part of your brain, and you'll keep starting over and over again trying to outperform your previous best. And thanks to the randomly generated playfield, you'll never feel like you're tackling the same experience twice.

In terms of presentation, Canabalt sticks to a tastefully minimalist art style. Everything looks as though it would be at home on a 16-bit console, yet nothing on a 16-bit console ever retained such a high level of beauty. That's not to call the look of the game complex – far from it. But in keeping everything black and white, in shaping the world with events taking place far in the backgrounds and little touches like the birds your runner disturbs as he runs past their rooftop perches – there's an elegance here that's just not found in most simple games. The accomplishment is even more outstanding when you realize the entire project was made in only five days as part of the Experimental Gameplay Project.

As an indie platformer that became a browser-based sensation, it only seemed natural that Canabalt would make its way to the iPhone. And while the portable version of Canabalt offers little more than a picture perfect port, this is simply an occasion where added bells and whistles weren't needed. The lack of additional content might make it hard to swallow the $2.99 price point for some (after all, the web version is identical and free), but being able to break this out at every bus stop and long fast food line makes this portable version of Canabalt worth the price.