Home / Reviews / Can You See What I See? Review

Can You See What I See? Review 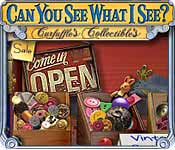 You may not have heard of Walter Wick, but he’s the genius responsible for arranging and photographing the scenes in the wonderful I Spy book series – so in a way, you could call him one of the founding fathers of hidden object games. Can You See What I See? features some of Wick’s most striking scenes in a charming seek-and-find adventure game.

The setting is Clyde Curfuffle’s collectibles shop, a staple of the community for more than 30 years that is unfortunately in danger of being shut down after a series of accidents. With Curfuffle himself in the hospital recuperating from a fall, it falls to you to help him keep the shop open by filling customers’ orders and looking for 12 valuable items listed in his journalthat will eventually lead you to an especially rare item that you can sell at auction to get enough money to see the shop through its hard times.

The list of items on a customer’s order can all be found by searching through twelve "bins" of stuff sorted by categories that include miniature cars, plushies, toy robots, beads & baubles, dinosaurs and animals. But these are no ordinary scenes featuring flat stock photos layered together. Each picture is a photograph of real, 3-dimensional objects that have been artfully arranged into playful scenes.

"Miniature Cars", for example, is a striking scene with row upon row of plastic and metal toy vehicles of all shapes, sizes and colors from early model racecars to trucks, buses and farm equipment from all eras. Your task might be to find an open door, popped-up hood, and racecar #4. "Dinosaurs" is a diorama-style scene with caves, a painted waterfall and lake, rocks and trees, and a dramatic red sky to recreate a prehistoric setting for you to pick out thing like 4 skeletons, a turtle, a shark and a bottle of glue (to glue the little plastic trees together, of course).

Each picture allows you to click on the Zoom button (or right-click the mouse) to move in for a closer look, and you’ll need to given the difficulty of some of the scenes. Beads & Baubles, for example, is a colorful but challenging jumble of what seems like thousands of beads of varying sizes and shapes.

After filling a customer’s order, it’s off to search for one of the valuable items in Curfuffle’s journal. First you solve a text-based riddle to figure out what the object is, then you must find it in the scene. Each object is a rare and valuable collector’s item, and the game provides interesting tidbits about each piece (like the rare baseball card of Homer "Squeaky" Warner, big league baseball’s first deaf player for whom umpires invented the hand signals that are still used in the sport today).

The final phase of each section is to play a Memory mini-game to unlock part of the phrase that will reveal the secret valuable item. The memory game seems a bit ho-hum and out of place, but in later levels you’ll at least see some variations like having to pair cards by color instead of picture.

The voice-overs of poor old Curuffle as he narrates each chapter are wonderful, as is the soundtrack of classical music favorites recorded with what sound like either real instruments or near-flawless digital equivalents. The only quirk about the music is that it has a habit of cutting in and out instead of being one continuous flow.

On the flipside, the biggest issue with Can You See What I See? is the hints system. You can get an extra hint if you find and click on Curfuffle’s yellow doll-like helper Seymour, but although he appears in each scene you can only click on him to get a hint once. Every subsequent time you revisit the scene and try to click on Seymour, it will register as a missed click and you might even lose some seconds off the clock as a penalty. It would have been less confusing for Seymour to be removed altogether from a scene once found.

Since there are twelve scenes, you can get 12 extra hints if you find Seymour in each one. If those run out, you can play a mini-game called Jumble Jar – where you drag items into the appropriate bins – to earn a few more additional hints. The problem with only getting a limited number of hints is that it’s eventually possible to get stuck. Hints also seem to stop working if you’ve used them to find an item once already or if you run out of time or exit the game and have to retry the scene.

Some of the riddles are truly taxing as well. One that tripped me up was "It survives to this very day, it helped T-Rex capture prey." There’s also occasionally some confusion about which object to click on since more than one item in the scene could apply. Items aren’t randomized, so on subsequent play-throughs everything will be in the same place. You can, however, play more than once to try to improve your high score.

I don’t want to sound like I’m getting too down on Can You See What I See? Without overstating the point too much, the scenes in the game really are spectacular with clever and meticulously arranged objects, and colors that pop like in a glossy magazine. A good dose of humor and polished production values bring the whole thing to life convincingly. Children will likely find the game enchanting for these very reasons, but it holds more than enough challenge for adults as well – in fact, it’s the perfect game to be played as a team since when it comes to riddles, two heads are often better than one.

Treasures of the Ancient Cavern Review