Home / Reviews / Can You See What I See? Dream Machine Review

Can You See What I See? Dream Machine Review 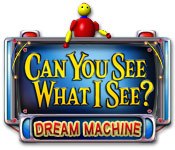 My favorite part about the first Can You See What I See? game (which came out mid-2008) was that the beautiful hidden object scenes were made up of old-fashioned toys arranged in playful ways. The sequel, Can You See What I See? Dream Machine, captures some of the magic of the original but feels overall like just another run-of-the-mill HOG.

The loveable but befuddled old man Clyde Curfuffle has another problem that he needs your help with. Clyde’s niece and nephew (twins) are celebrating their birthday tomorrow and he wants to give them each a very special present (a book of fairy tales and a robot radio). The trouble is, he can’t remember where he’s hidden them. Clyde asks you to find the presents with the help of an invention called the Dream Machine, which helps you explore Clyde’s dreams for clues about where the items are.

You’ll start by searching the scene for hidden objects from a straight-up list (like rabbit, hat or blackbird). Additional objects are represented by “dream riddles” that you must decipher (such as “He’ll help you stay above the muck / Some say his shoe will bring you luck,” which is of course referring to a horse.)

Can You See What I See: Dream Machine has also introduced a variety of different mini-games, and a challenge where you have to use the “dream decoder” to find the pattern within a group of objects (in other words, you’re shown 10 different objects and have to identify four that all share something in common.)

Finally, you can use the dream decoder to decipher symbols and learn interesting tidbits about what it could mean if certain objects appear in your own dreams – for the record, dreaming about scary clowns symbolizes childhood fears that you still haven’t overcome.

My feelings about the mini-games are mixed. Some are quite fun, but others – such as the apple-shooting and car-parking games – seem to go on just a little too long. (Perhaps offering three variations instead of four would have been better). Another welcome option would have been the ability to skip mini-games if a player just doesn’t care for that type of puzzle, or finds it too physically challenging.

Word recognition can occasionally be sketchy, too. For example, when asked to click on a “cat” I couldn’t click on either of the lions in the scene – even though lions are cats, too (albeit gigantic ones.)

The scenes themselves, while still unique, didn’t seem as artfully and thoughtfully arranged as those in the original Can You See What I See? game were. Sure, they were still largely composed of a charming array of old-fashioned toys like plastic soldiers and wooden alphabet blocks, but the clutter seemed more random this time around, which makes it harder for Can You See What I See? Dream Machine to stand out from the crowd of other hidden object games.