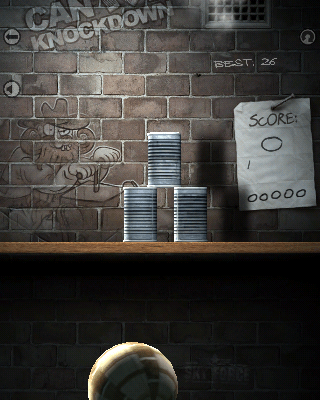 Can Knockdown 2 may be simple, but it’s still good, simple fun

Sometimes the simplest concept is also the best. That was true for the original Can Knockdown, last year’s iPhone hit that provided little more than what the title implied. You used a ball to knock down cans, like in a carnival game. And Can Knockdown 2 doesn’t mess with that simple formula that made the original such a surprisingly addictive hit. Instead, it adds a few new modes and an improved presentation to create a much more solid all around experience. It’s still a little lacking when it comes to lasting appeal, but Can Knockdown 2 is definitely good for some arcade fun.

The main mode remains the same. You are presented with increasingly complex can structures and tasked with knocking down each individual can. The fewer shots it takes the higher the score you’ll earn, and the more balls you’ll have for the next structure. And once you run out of shots it’s game over. Figuring out the most efficient way to tackle each structure can be pretty tricky, especially with some of the more complex ones. Thankfully the game uses an incredibly intuitive control scheme.

Throwing a ball requires nothing more than a swipe of your finger. You can direct the angle it’s thrown at based on the direction of your swipe, and the speed changes based on how hard you swipe. The physics feel quite realistic, but it’ll still probably take some time to get fully acclimated to the way the balls and cans move. That is, unless you played the original, in which case the controls will feel intimately familiar.

The main difference between the sequel and its predecessor is the inclusion of two new modes to flesh out the experience. Both are timed, and both provide a satisfyingly different experience when compared to the main mode. One mode has you tossing balls at floating targets that will pop out at random places on screen. A close shot will knock the target down, while a strong shot right to the middle will cause it explode, earning you more points. The other mode has you tossing balls at flying cans, which shoot out of pipes at the bottom of the screen. They appear at different distances from you and move at different speeds, so it requires some careful timing. In each mode, just like the main one, the ultimate goal is to simply rack up as many points as possible. 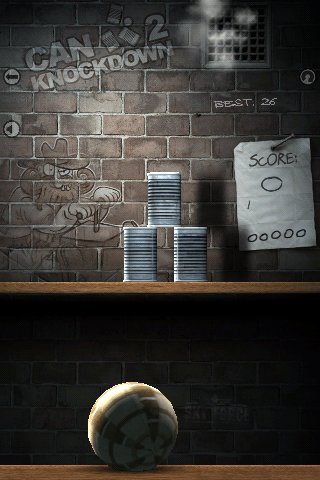 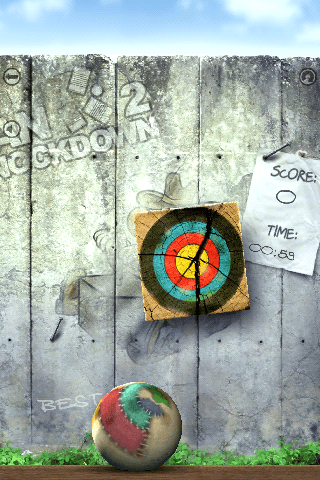 The additional modes go a long way towards making Can Knockdown 2 feel like a more substantial game, but it still could use a little extra something to give some added lasting appeal. Game Center achievements are a nice touch, but with only a dozen available it’s not much of an added incentive. And as fun as the core gameplay is, it doesn’t hold up for extended periods of play.

But it’s fun while it lasts, and it’s definitely a worthy game for those quick, two minute bursts of gameplay that the iPhone is so good for. And it’s simple and intuitive enough that you can pick up and play it within a matter of seconds. Can Knockdown 2 is the next best thing from hitting the midway at your local fair. It may not have cotton candy, but it’s still plenty of fun.