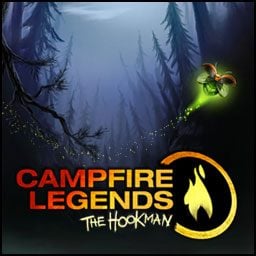 Sitting around a campfire telling ghost stories has been proven to be an outstanding way to scare your friends, but how about yourself? Now GameHouse has taken on the role of storyteller, and it’s your job to not just listen to the story, but to experience it first hand in an eerie tale of survival and the unknown. Just in time for Halloween, do you have what it takes to survive Campfire Legends: The Hookman?

The legend of the Hookman in Campfire Legends is portrayed as just that: a legendary campfire story of horrific proportions. As the game opens on a group of girls sitting around a campfire exchanging unsettling stories, the tale of the Hookman (in which two teenagers barely escape an escaped serial killer with a hook for a hand) is brought to life again one dark night. You’ll follow the story’s characters: Christine and her boyfriend Patrick, as their romantic weekend at a woodland cabin soon turns into a haunting and disturbing night alone with the unknown.

Campfire Legends is a thrilling hidden object adventure with some unique twists. Where some games in the genre have separate point-and-click sections coupled with scenes specifically designed for finding hidden objects, this particular game does a beautiful job of meshing the two. Hidden objects aren’t always hidden in a single screen or area, but sometimes rather spread out over a few areas. The beauty of this is that every single hidden object has a purpose, and the location of each makes sense.

There’s no "copying and pasting" of objects, as in objects that are randomly placed, often defying the laws of physics to make finding them harder, or random objects that are only added to an area to make finding what you need harder. Each object in the game, whether you need to find it or not, is specifically tailored to match and work with the environment in which it is placed. This quality, coupled with the meshed adventure and hidden object play with no specific borders, gives the game a very unique and exciting feeling of actually being there and experiencing the story. The feeling of sense and realism is unparalleled.

But there’s more to gameplay than simply finding hidden objects to solve puzzles; there’s also a variety of actual mini-game style puzzles to boot. Puzzles range from reassembling torn paper and broken mirrors to solving complex lock and safe systems, each with their own twist. The majority of puzzles aren’t particularly easy, either, nor can they be skipped. They’re challenging and will require you to think out of the box.

There’s a hint system available in this game, but you don’t have unlimited hints that renew themselves over time: you have to work for hints in Campfire Legends. Hints come in the form of fireflies, which cleverly perch themselves around the various areas. Picking up a firefly will allow you to save it and use it for later. Fireflies can act as general hints telling you where you should go, or may be as specific as showing you exactly where something is hidden depending on where you are in correlation to what you need.

You can also save up a certain number of fireflies to then trade for specific tips and puzzle solutions. Think of it as a hint upgrade system. If you run out of hints, your current goal can always be checked and by default, will be displayed at the top of the screen.

Yet what’s a campfire story without the horror? Don’t worry, Campfire Legends definitely delivers. It’s not just about a creepy environment: music, presense, fleeting shadows, surprise in-your-face encounters, and just plain suspense are all capitalized. In fact, the game does this so well I found myself holding my breath and literally jumping on more than one ocassion, and this is a horror enthusiast we’re talking about here. It’s seldom you ever feel completely safe. That being said, this game might not be suitable for the faint of heart or younger players.

My only real disappointment when it comes to Campfire Legends: The Hookman is that there’s not more of it. The game is fairly short, and when you do reach the end you’ll simply be left wanting more and wishing it wasn’t over. The game doesn’t feature much replay value, but many things are randomized for those who would like to go back and enjoy the story again.

There is some good news for those who want more though: Campfire Legends: The Hookman is the first of an upcoming trilogy. With a stunning soundtrack, gorgeous artwork, handmade environments, and memorable gameplay, this is an outstanding title. The most amazing thing about this game? This is the very first hidden object title created and developed by GameHouse Studio Eindhoven (the Netherlands-based studio formerly known as Zylom). One can only hope there’s more where that came from, but prospects look promising.

Alabama Smith in the Quest of Fate Review