If you perform well enough, Clint Eastwood might have a fake argument with you!

Both of my parents ran for public office when I was growing up, and I always thought it seemed like a tiring, thankless process. They assured me it was fulfilling, though, and now you can find out for yourself thanks to Campaign Story by 519 Games. This freemium Facebook game allows you to work your way up the political ranks by running from everything from mayor to emperor. Okay, maybe not emperor, but you get the picture.

Your Campaign Story begins when you elect the name and campaign slogan for your candidate, as well as one of 10 avatars (some male, some female). Your first objective is to become mayor, with the race also serving as your introduction to the game’s most important mechanics. One of the first things to master is how to keep track of the news, where issues important to the voters pop up in individual stories. Using Energy and Influence can make things happen in those areas, but your wily opponents will try to attack you when you do.

Of course, you don’t have to take things lying down. By hiring staff – beginning with a Press Secretary – you can react to the ways your opponent spins different issues. Choosing the high road takes longer but wins you positive reactions from more voters. Fighting fire with fire by mudslinging right back ties up your staff for shorter periods of time but influences fewer people. You know, because most voters are swayed by positive campaigning. Wink, wink!

Hiring Staff costs Money in most cases, which can be replenished by hiring a Fund Raiser, and having them, um, raise funds. More powerful Staff can only be hired by spending Gold, which should make the state of Utah happy. Gold can also be used to speed up the time it takes for staff to accomplish things.

The most important staffers might be Canvassers, who actually go out and press the flesh on your behalf. A Region Map shows areas where people are for you, against you or neutral using a stoplight-type system, and hovering a Canvasser over different locations shows you where they might be able to do the most good. A few minutes later, presto – more people have been persuaded to vote in your favor. As soon as 51 percent are leaning your way, the election is held, you’ve got the job, and you move on to your next political ambition.

As far as this reviewer could tell, that’s pretty much all there is to it. Running for a higher office means you are juggling more balls, so to speak, in terms of more issues and more regions to watch. But since you can hire more Staff (up to a limit on each position) and send them back as soon as they come in, there doesn’t seem to be any additional difficulty except for the larger scale. What’s missing is a sense of urgency, as there would be if you only had a certain amount of time to sway the voters. Real life candidates would probably agree that their campaigns would be much easier if they had all the time in the world. 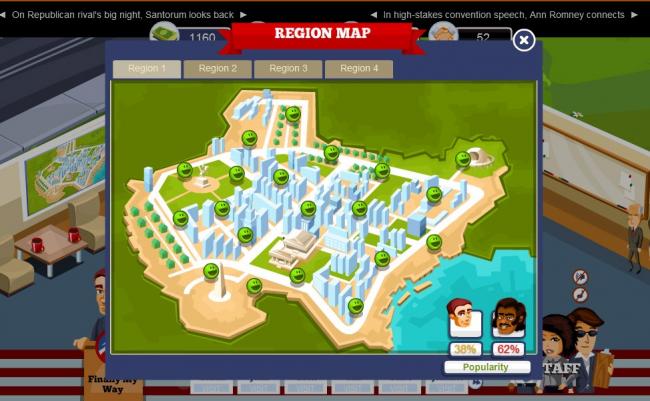 But Campaign Story is supposed to be a lighthearted look at the political process, not a cutthroat one. That’s certainly apparent from its visual style, which is cartoony and stylized. There are some graphical glitches from time to time too, like Staff hanging around your headquarters without displaying the icons that tell you they have resources for you to collect. It’s not a huge deal, but it is an annoyance.

There’s little doubt that Campaign Story is a lot less stressful than going through a campaign yourself, but that might be because there feels like so little is at stake. By all means, check it out if you are a political junkie who needs something to do for five minutes every day while waiting for MSNBC and Fox News to refresh their websites, but don’t expect it to change the world.