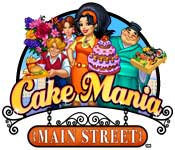 Sandlot Games sort of went off the deep end for Cake Mania 3, sending our favorite heroine baker Jill on a freaky time-traveling journey to recover missing family members and serve up thousands of delicious frosted delights for a menagerie of dinosaurs, mummies, and wizards. Cake Mania: Main Street sees Jill settling back into the slightly more normal routine of trying to revive her hometown of Bakersfield. This time she brought her friends, and there’s a lot far more than baking in store for you.

After just getting married and returning from a crazy trip through time and space, Jill must be exhausted. That doesn’t stop her from trying to rally the troops and save her old stomping grounds from the soul-sucking, small business-destroying clutches of the newly opened Bakers Corner mega mall that caused most of the shops on Main Street to shut down. With the help of her new hubby and a few other friends, Jill must reopen four small businesses, attract more people to the town, and stick it to the man. There’s also some other major life changes brewing just beneath the surface, but we’ll let you stumble upon that surprise on your own.

Little has been done to change the core of Cake Mania‘s addictive baking-themed time management gameplay. You’ll start out by playing as Jill in her rickety, re-opened bakery. There you’ll spend each day taking orders for baked goods from highly unusual customers, assembling each cake from scratch, and earning money to upgrade your equipment and eventually renovate your shop. Though it’s essentially the same underlying concept found in the past few games, it’s still very absorbing and entertaining to speedily assemble complex orders – complete with up to three tiers of cake, a bevy of different shapes and colors, and multiple special toppings – by clicking up a queue for Jill to follow as she zips around the kitchen. Fortunately, Main Street takes this idea several steps further, by tying your success into the revitalization of the town as a whole.

Turning around a failed local economy is a tall order, so Jill brought reinforcements to help her re-open the failed shops around town and make Main Street a thriving place once again. Her new hubby is in charge of the local burger joint, her city gal friend handles the flower shop, and a former sumo wrestler bud tackles the nearby sushi restaurant. These other venues provide some great new ways to play, without veering too far off course from the original high octane bakery fun.

In the Burger Barn, you wind up manning both the front counter and the grill. As orders come in from customers, you’ll throw down buns, cook the various meats, apply the requested condiments and veggies, slap everything down on their tray, take their money, and move on to the next person in line. Everything must be assembled in the proper order, which becomes tougher as more ingredients are added into your repertoire. Instead of buying lots of new equipment, you’ll purchase scores of new recipes that fetch a higher price, make the manual labor more enjoyable, and increase the challenge and complexity of your dishes.

Risha’s Flowers features a visual layout and gameplay that’s similar to Jill’s bakery, only you’ll be pulling flowers from the odd machines instead of cakes from the ovens. Other tasks involve wrapping colorful bouquets for customers and adding pleasant little accoutrements. Sumo Sushi is a more exotic take on Burger Barn’s gameplay, since you’ll be assembling Japanese cuisine that’s far less recognizable at a glance than your average burger and shake. Though both pairs of restaurants run by the guys and gals are similar in how they play, the differences in the presentation and the kinds of foods you’ll make each venue feel fresh and exciting. New restaurants and gameplay modes unlock progressively as you work your way through the game’s 100 levels. You can also jump back and forth between different restaurants you’ve unlocked at any time to continue working on improving each business, and there’s a ton of stuff to purchase, unlock, and upgrade in each.

Your steady stream of bizarre clientele is as crazy as ever, and their antics add extra chaos into the mix. Some, like old cat ladies and aliens, don’t do anything particularly exciting. But others have special powers that are geared to annoy and confuse you. For example, vampires turn their neighbors into other vampires, chefs cause the others near them to change their orders at the last minute, and ninjas use smoke bombs that stun other customers. When everything erupts at once, it makes the gameplay super intense.

Main Street substantially builds on the original foundation explored in past Cake Mania games, and offers enough exuberance and excitement to appeal to long-time fans. Even if you haven’t played the series before, now is a great time to jump into the cake mix.