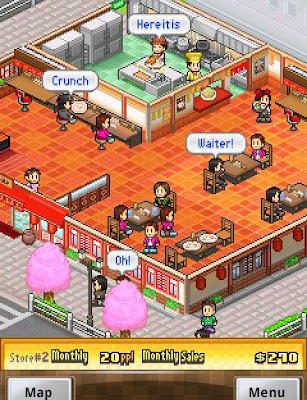 Another Kairosoft release, another weekend lost to the management game genre. Cafeteria Nipponica takes the developer’s tried and tested formula to the food and drink sector, as players build a restaurant empire that starts on the outskirts of the big city, and eventually expands to the hustle and bustle of modern life.

Every Kairosoft game to date has been thoroughly addictive, and this new release is no different, with so much to see and do and many, many hours worth of culinary challenges to dive into. Cafeteria Nipponica definitely feels a lot less focused than past games in the series, but we still found ourselves glued to our mobile screens at three in the morning, unable to go to sleep until that latest recipe for fried rice has been perfected. 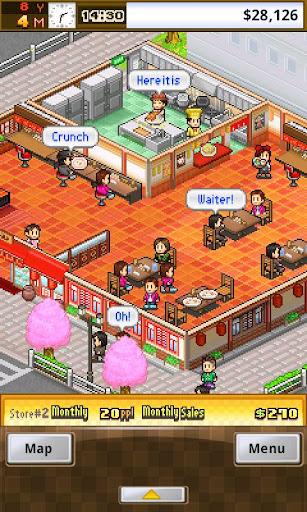 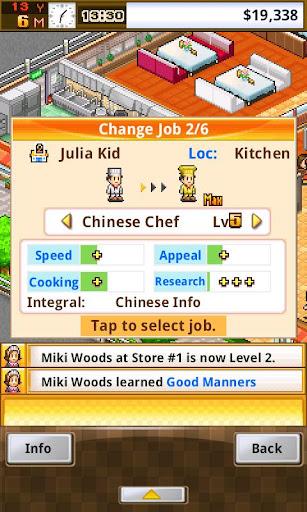 You begin Cafeteria Nipponica with a simple dream – to build a chain of restaurants that are packed with hungry punters every day, eager to try out your latest dishes. Once you’ve placed down some tables, hired some staff and given your place a name, the action kicks off and people will come marching through your open doors.

As you make money, you can train your staff, buy ingredients for your kitchen, expand your restaurant and eventually open up more restaurants for people to visit. Your kitchen houses your cooks, while the main floor sees your waiters scurrying around, taking orders and delivering food to hungry patrons.

As with all Kairosoft games, there’s a serious amount of depth and features involved, some of which you won’t even be made aware of until many hours into play. Special plans that boost the popularity of your chain are eventually made available, while staff can level up in certain areas of expertise, eventually becoming super chefs and managers that specialize in specific types of food and work.

The game’s biggest focus, however, is on the food itself. In addition to choosing the menus for each of your restaurants, you can also improve your dishes and even create new ones, using ingredients you find out in the world, or purchased from the shop. Making the perfect menu takes a lot of time, but is very rewarding.

The interior of your restaurant is also very important. You can place down niceties such as plants, TVs and the like to keep people entertained, and you can also spruce up the entire establishment with a color- and- style makeover that appeals to specific types of people. The wider the variety of people you attempt to pull in, the more money you’ll end up earning in the long run. 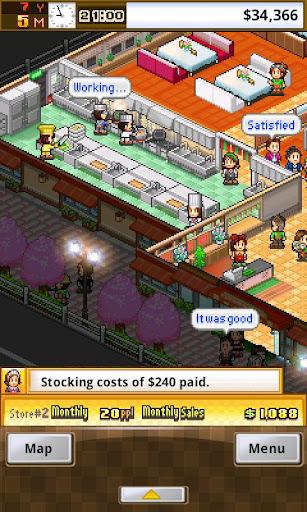 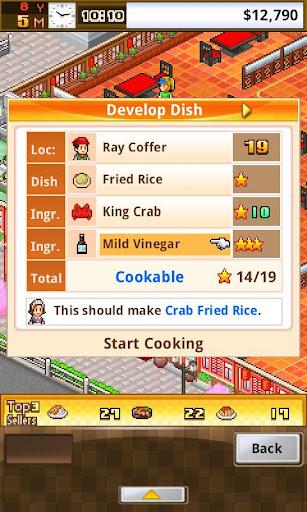 Cafeteria Nipponica is the first Kairosoft game to allow for running multiple locations at the same time. You can have up to three restaurants at one time, and you’ll need to flick back and forth between them to keep everything in tip-top condition. That added edge of responsibility adds a nice bit of freshness to the usual Kairosoft formula.

However, this latest addition to the franchise also stumbles in vital areas that other games in the series do not – namely, it can be a little empty at times, with not a lot to do except wait until the required amount of money has poured in.

We found ourselves simply sitting and watching the action for five, sometimes ten minutes until enough money had been earned to allow us to unlock the next bit of the game. There’s not really a lot you can potentially do in the meantime, as pretty much everything you do uses the same currency – cash. Hence, if you’re waiting to buy a restaurant expansion, that’s all you can do – wait it out.

Then there’s the recipe system. Each evening, your head cook will work hard to boost or create a recipe. But since it’s out of your hands, and you have to simply wait for him to finish, with no way to boost him, it’s yet another waiting game, adding to the amount of sitting around that we were already doing. You can partially boost recipes yourself, but this uses up whole ingredients and doesn’t really have that much impact.

Finally, we take serious issue with the way in which you’re forced to pay your staff once every year in April. There doesn’t appear to be a place where you can even check how much your total paid out to staff is going to be, and so whenever April rolls around, we were surprised by the total every single time, and then spent the next few months getting out of the red. It’s a very poor system – why can’t we pay staff every month like, you know, real-life?

Cafeteria Nipponica is one of the weakest Kairosoft titles to date, but let’s be honest – that’s not really saying much, given how brilliant the franchise is. It’s still a great way to spend a good few days – maybe even a week or two if you really get into it – and Kairosoft fans will no doubt pick it up regardless.