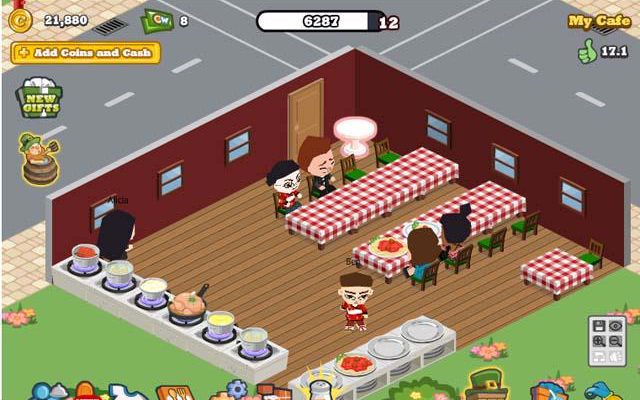 Café World is one of the games Zynga has launched since the massive success of FarmVille, and its overall style of play is very influenced by that game. By serving food to customers and performing sundry other tasks, you can earn enough money to customize your little café to fit your tastes and grow it into a larger restaurant. Every recipe in the game requires a certain amount of time to create, anything from five minutes to three days.

Every dish costs so much to produce and will earn you a certain amount off the game’s time-based virtual currency, Coins. A finished dish that sits in your game too long without being served will rot, causing you to lose your initial investment. The idea is to make sure players are checking back into the game roughly when they know dishes are going to finish cooking. Sadly, all the most lucrative dishes have oddball cooking times like 12 hours or 22 hours. 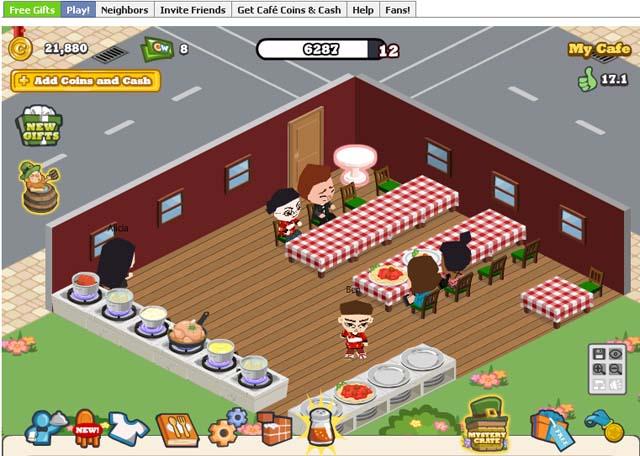 Café World is a game where how many friends you have playing it with you has a dramatic effect on what you can achieve by yourself. How far you can upgrade your restaurant’s size us Coins is directly determined by how many Neighbors you acquire. Otherwise, past a certain point, you must spend the game’s real-world Café Cash currency on upgrades. Knowing this can be very discouraging.

Having friends in Café World is a lot more fun than it is in most Zynga games, though. While Café World lacks true multiplayer, you still have the option of visiting your friends’ restaurants. You can’t choose to help your friends run them during visits, which is disappointing, but you can occasionally trigger random events during visits that offer you currency and experience bonuses.

The random events would seem to encourage you to leave the Café World app running as long as possible once you start playing. This is somewhat risky, since if you run out of food to serve while your browser is open, your restaurant’s score decreases and customers begin coming in more slowly. Optimal play actually demands some skill, since you need to really learn how long it takes to serve a given dish and plan your menu accordingly.

Café World is a fun game to watch, too. It features attractive 3D graphics implemented through a Flash-based client. You can watch your avatar wander around, acting as chef, serving a steady stream of adorable customers. There’s a massive selection of customization items in the game, with dozens available for your avatar and hundreds available for your café. You can decorate a swanky café using only Coins. Most of the Café Cash items are striking enough to feel worth the price, too. 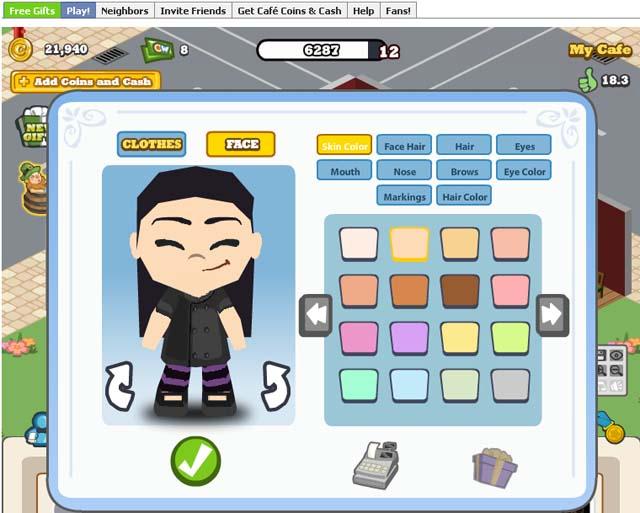 Unfortunately, if you run the game for even a few hours in some cases, Café World will eventually lock up your browser. The memory leak problems were surprisingly persistent across multiple computers, operating systems, and browsers. Chrome generally handled the app the best, while Safari had the most severe memory leak issues.

There’s a lot of potential in Café World, especially if Zynga makes the social features more robust in future iterations. Right now the memory leak issues make the game substantially less fun, since you’re forced to play the game in two or three quick bursts (at most) per day. Playing Café World this way just doesn’t feel very satisfying. It would be far more enjoyable to be able to run Café World in a browser tab throughout the day, checking in every so often to see the little avatars scurrying about, enjoying delightful cartoon food.