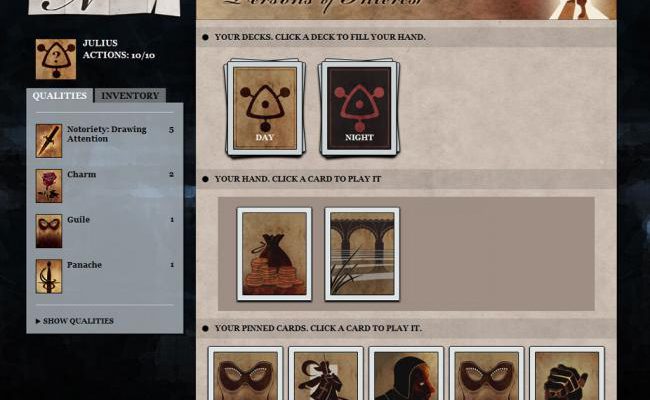 In a gaming mood? May I recommend a nice Cabinet Noir pairing with that?

Never in a million years did I ever think the text adventure game genre would make a comeback. I mean, it’s sort of ridiculous. While I have many fond memories of navigating my way through Zork, those games are by all accounts antiquated. They were a product of their time, certainly, but with desktop computers now more powerful than the shuttle that delivered men to the moon, why would we choose to play a text adventure game? Cabinet Noir and the StoryNexus system makes a compelling case.

The game throws you into 17th century France, the time of Cyrano and the Three Musketeers. But that “all for one and one for all” nonsense has no bearing here. Your tale is told in dark alleyways and whispered in the corners of taverns. Setting yourself apart or making yourself too well known is definitely not the goal. 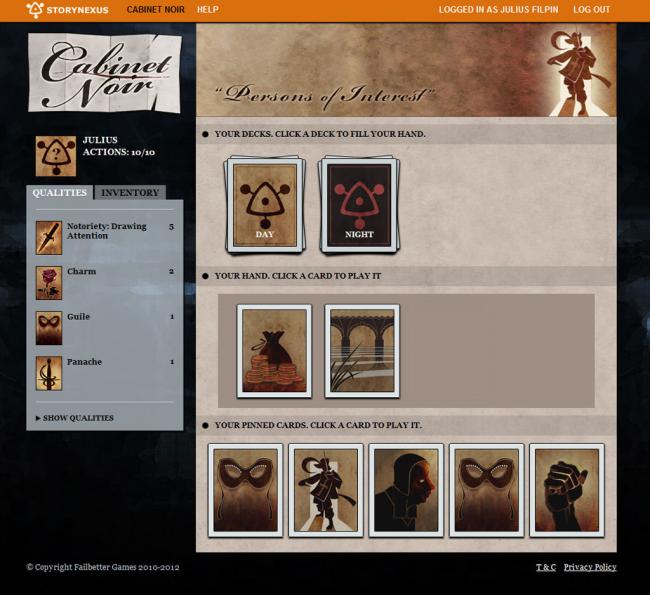 You play an agent in Cardinal Richelieu’s secret intelligence service. To say anymore of the story would ruin the experience, but I will say this, the term Cabinet Noir in France means “black room,” and denotes a place where suspicious persons had their mail opened and read before being forwarded onto them without them knowing. Creepy, right?

Cabinet Noir is a text adventure game that is entirely played out inside your web browser. You’ll play cards from a virtual deck that give you a bit of story and then offer you some choices on what you want to do, along with your chances of completing that particular task successfully. Successes give you bonuses and inventory items to use in subsequent challenges, and failures increase your notoriety (this isn’t a good thing).

This is a setting that is criminally underused in videogames. Actually, underused might not even be the right word, since I can’t think of a time when it’s ever really been used at all. When you think about it, this makes no sense. Not only is it full of swashbuckling heroes looking to defend honor and sword fight each other for good and ill reasons, but it’s dripping with secrecy and intrigue. It’s a wonderful world to wrap yourself in, and Cabinet Noir does a wonderful job of putting you in it.

Having recently played Telltale’s The Walking Dead game, the bar for compelling video game story was set impossibly high; and yet here I am impressed as all get out with Cabinet Noir. Like that other game, here’s a story that’s not only compelling and well-written, but makes you feel like an active participant in it. I found myself questioning my motives, constantly moving my moral line for what I thought was ok, and wondering if I were a virtuous as I thought I was when I started out. Truly excellent stuff. 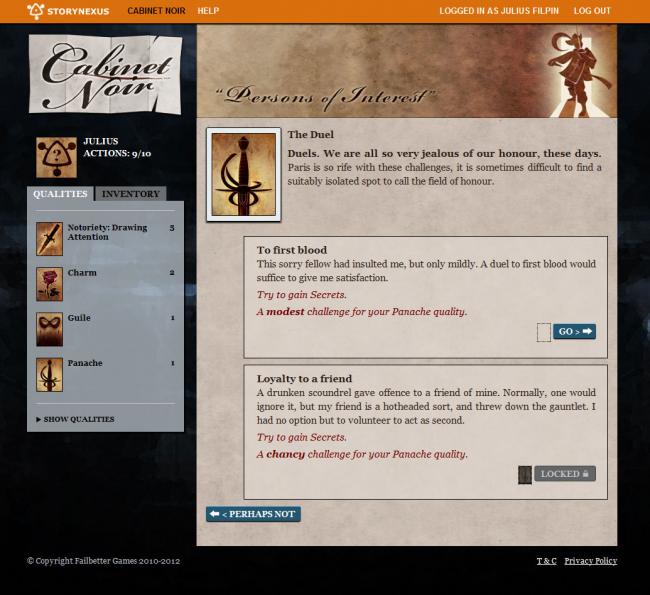 It’s really a testament not only to writing, but the StoryNexus system backbone. You feel like you’re crafting a story, not reading one. It feels tailored to me, with my actions dictating where the story goes. In this way there’s no winning or losing per se, you don’t “beat” Cabinet Noir. The story comes to a natural conclusion depending on how you played the character. In that way Cabinet Noir (and Failbetter’s earlier game Fallen London) are infinitely replayable. Make a different character with different strengths, or make an infinite number of different choices.

The game is completely free to play, though you do have a limited number of actions that you can do before waiting for them to recharge. You can buy your way out of that restriction if you want to, but outside of having to occasionally wait a bit before continuing, there’s nothing held back story wise by not paying in.

It’s a lot smaller in scope than Fallen London, which I felt was a bit to the game’s detriment, but the tighter footprint of Cabinet Noir isn’t a deal breaker. Developer Failbetter Games has managed to impress with their second release almost as much as their first, and we can’t wait to see where their StoryNexus system takes them next.